Last week, the British press was in full-throated cry on the Libor scandal , both as a political story (the connections to the Conservative party; the questions over the Bank of England’s role) and for its economic repercussions (who else was involved, who wound up on the losing side). Many commentators took note of the Economist’s cover: 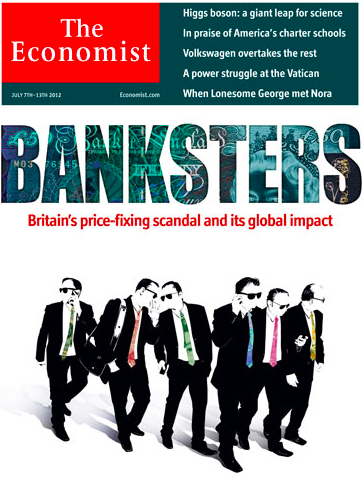 But despite the dramatic image and the use of the pejorative “banksters,” the article combined some helpful analysis with a call not to act against banks in haste:

The attempts to rig LIBOR (the London inter-bank offered rate), a benchmark interest rate, not only betray a culture of casual dishonesty; they set the stage for lawsuits and more regulation right the way round the globe. This could well be global finance’s “tobacco moment”.

The dangers of this are obvious. Popular fury and class- action suits are seldom a good starting point for new rules. Yet despite the risks of banker-bashing, a clean-up is in order, for the banking industry’s credibility is shot, and without trust neither the business nor the clients it serves can prosper….

Translation: don’t do too much while tempers are hot. Yet this stance also happens to be the one used again and again by incumbents and lobbyists: drag out discussions of what to do until the public’s attention has moved elsewhere. As Frank Partnoy recounted in his book Infectious Greed, this strategy was particularly effective in the 1994 derivatives wipeout, which destroyed more wealth than the 1987 crash. A series of investigations and hearings in the end produced close to nothing because the banking industry was able to drag out the process, and then argue that things were back to normal, so why were any changes needed?

The first is to find out exactly what happened and to punish those involved. Where the only motive was greed, the individuals directly involved in fraud should face jail. If the rate was lowered to keep the bank afloat, and regulators were involved, both the bankers and their rule-setters should explain why they took it upon themselves to endanger the City’s reputation in this way…

The second task is to change the way finance is run—and the culture of banking. This after all is not the first price-fixing scandal: Wall Street has had several. A witch hunt would be disastrous (see Bagehot), but culture flows from structure. The case for splitting retail and investment banks on “moral” grounds is weak, but individual banks could do more: drawing fines from the bonus pool is one example. And some rules must change. LIBOR is set under the aegis not of the regulator but of a trade body, the British Bankers’ Association. That may have worked in the gentlemanly days when “the governor’s eyebrows” were enough to keep bankers in order. These days the City is the world’s biggest centre of international finance.

This is thin gruel, particularly for a scandal of this magnitude. What seems to have contributed to the outrage in the UK is the casualness and regularity with which Barclays diddled with Libor. It correctly points to the way it has become normal for bankers to cheat every way possible to pad their wallets. Bid rigging and collusion are appallingly widespread. We haven’t even gone looking for it on the blog, yet have come across it frequently. For instance, in the early phases of the crisis, in the CLO and RMBS markets, it was widely known that dealers would “trade” very small order sizes with friendly parties (back scratching with other banks or with hedge funds) to establish phony (as in inflated) prices for valuation purposes. Similarly, it was common for CDO desks to cooperate with preferred short sellers and give them a “last look” at bids on credit default swaps, meaning allowing them a look at their orders in what was presented to most customers as an auction where all participants were treated equally. There is also evidence that points to collusive behavior between CDO managers and deal underwriters, not just the lack of independence in asset selection (meaning they’d take dreck if it was presented to them) but also in the pricing of the assets. In other words, the outrage is warranted because the Libor rigging provides confirmation of what many ordinary folks have suspected: the banks are rife with predators.

So what does the Economist suggest? Notice that when “profit” was the motive, they argue “the individuals directly involved should face jail” Huh? This means low level folks and maybe their immediate bosses, as well as perhaps some ritual sacrifices from compliance or risk management. But everyone up the line profited. The bigger the profits of the bank, the bigger the senior executive pay levels. Unless senior executives feel they are also at risk when producers play fast and loose, they have every reason to continue to give them free rein, enjoy the extra revenues, and cut them loose if they are clumsy enough to get caught. And note how it ducks the question of what to do about the cultural morass after implicitly rejecting making the top brass pay and explicitly rejecting breaking up banks.

But this should not be surprising given the Economist’s history on the subject of banking. Even though it was early to identify the housing bubble by mainstream media standards (in a June 2005 cover story), at the end of November 2006, as the subprime market was coming apart (it recovered in March 2007 and went into its terminal decline in May 2007), it argued vociferously that financial services in the US was overregulated: The familiar concern that China is going to steal the country’s remaining manufacturing jobs has been compounded by a newer fear: that Wall Street is losing its grip on the world’s money. Bankers and politicians worry that business will drain away from America’s capital markets to financial centres overseas, particularly London and Hong Kong. Several committees are sweating away on reports, the most important of which is to be published next week, on how to stop the rot. America’s treasury secretary, Hank Paulson, made it clear in a speech on November 20th that he shares their concerns.

Although it is still the world’s biggest market for capital, America’s lead is shrinking fast in almost every area (see article). In some it has been overtaken. The most spectacular collapse has come in the market for initial public offerings (IPOs) of shares, where the New York exchanges, miles ahead a few years ago, now trail behind London and Hong Kong. American stockmarkets are actually shrinking as domestic firms go private or buy back their shares; and it isn’t helping that foreign firms choose to list elsewhere.

Funny how the Economist fails to consider that as the US economy is smaller as a percentage of world GDP than is was in the 1980s, that companies would want to target investors in markets where their brand name was well recognized, since they might get a better price than in the US (ie ease of registration is secondary to how high a price the offering will fetch). And it does point out that the fall in the value of listed equities is due to big companies not acting like capitalists and investing in their businesses, but preferring to goose stock prices via share buybacks or leverage (LBOs). That’s a function of bad incentives for top executives, not US regulations.

The Libor scandal is sure to be a protracted affair, and as it continues, expect there to be more and more efforts to minimize the significance of these abuses. But I suspect if regulators keep exposing e-mails and other evidence of how banksters actually rigged prices, and particularly if it extends to derogatory comments about customers and counterparties, the defenders-in-waiting will have a hard time talking the public down. Lawsuits are also another source of damaging revelations. Recall the derivatives scandal at Bankers Trust. I didn’t have much sympathy when Procter & Gamble sued BT, alleging it had been cheated on over-the-counter derivatives trades. P&G is a sophisticated company that has a treasury operation that manages complicated foreign exchange exposures. They had access to the best lawyers, and if they were dumb enough to enter into a derivatives trade they didn’t fully understand, shame on them.

But even though P&G may not have had a very strong case, in discovery, they got their hands on internal recordings which showed how gleeful BT staff were at taking advantage of P&G, and how this was their preferred mode of operation. There was no winning with quotes like this: ” “Funny business, you know? Lure people into that calm and then just totally fuck ’em.” ” And I suspect as the Libor scandal wears on, we’ll have more than a few rapacious statements like this come to light.

Even if people don’t understand exactly how they were hurt (and the damage in many cases is likely to be indirect, such as through higher public transport prices or insurance costs), they do know that the banks were lavishly bailed out and that ordinary people would lose their jobs, and perhaps their freedom, if they tried anything like the routinized cheating in Wall Street and in the City. Public sentiment in the UK seems to have turned decisively against the financiers. Sadly, history suggests that banks, aided here by more cooperative reporters, will succeed in keeping Americans in their torpor.