We are delighted to post the latest offering of Project S.H.A.M.E, a media transparency initiative led by Yasha Levine and Mark Ames. 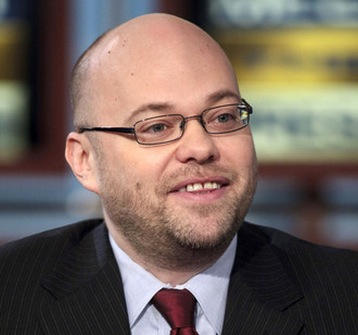 Adam Davidson graduated from the University of Chicago with a BA in religion, and began his public radio career selling airtime and doing sponsor outreach. He then became an on-air radio personality, filing pro-Iraq War dispatches as Marketplace’s Middle East correspondent, and recently transformed himself into an effective propagandist for the banking industry. Over the years, Davidson has whitewashed the occupation of Iraq, praised sweatshop labor, attacked the idea of regulating Wall Street and argued for “squeezing the middle class”–all while taking undisclosed money from banking interests. No wonder Davidson shamelessly credited Wall Street for providing “just about anything that makes you happy.”

The Recovered History of Adam Davidson

Adam Davidson’s career is currently being funded by bailed out banks. On top of Ally Bank’s exclusive sponsorship of Planet Money, Davidson receives lucrative speaking fees for appearing at events funded by the same banks and financial companies he covers as a journalist. Davidson has yet to disclose his corporate clients and how much they pay him, but here is a partial list of Davidson’s gigs from the last two years compiled from various publicly available sources:

Chicago Public Media, which co-owns “Planet Money” through its ownership of “This American Life”, explicitly bars conflicts-of-interest: “WBEZ journalists must uphold the trust of the public by not overlapping individual interests with professional responsibilities. WBEZ journalists may not accept any form of compensation from the individuals, institutions or organizations they cover.”

Note: Both NPR and This American Life have not responded S.H.A.M.E.’s requests for comment about Davidson’s conflicts of interest.

Ally Bank has been Planet Money’s exclusive sponsor since 2009, a relationship that provides a textbook example of conflict of interest. Below are two screenshots of Ally Bank advertisements running on Planet Money’s website: 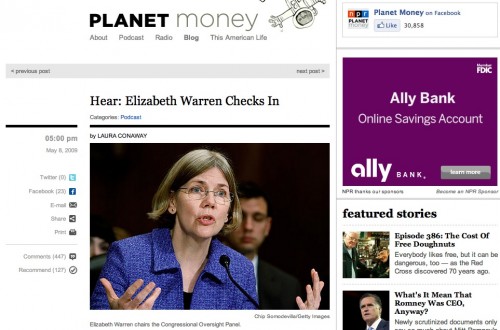 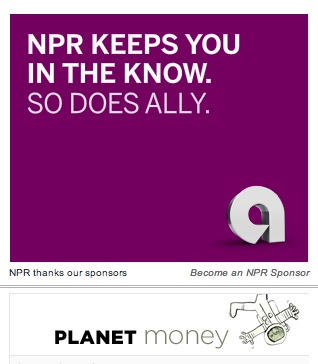 I feel like the voice of business journalism is sort of, it’s an authoritative voice of God.

–Davidson in a 2009 interview with Nieman Journalism Lab

The last time I interacted with University of Chicago faculty in an extended way, they were my professors. Sitting on a stage as their ‘peer,’ I felt like a kid who had borrowed his dad’s suit.

Raising [corporate taxes], or even maintaining them, might satisfy the anti-corporate angst of protesters and populists, but it won’t come anywhere near paying off our debt. Most people who study the issue agree that the top federal corporate tax rate (35 percent of profits) is simply too high. The cardinal rule of taxation is that whatever you put a levy on, you’ll inevitably get less of.

Every economist I’ve spoken with says, simply, that it was a bad law but that it and its repeal are not really to blame for what is happening now.

–Davidson’s NPR segment “Can We Blame Or Praise Glass-Steagall?”

Most people who study the issue agree that the top federal corporate tax rate (35 percent of profits) is simply too high.

–Davidson on why U.S. should lower corporate taxes

I talk to a lot a lot a lot of left, right, center, neutral economists [and] you are the only person I’ve talked to in a year of covering this crisis who has a view that we have two equally acute crises: a financial crisis and a household debt crisis that is equally acute in the same kind of way.

–Davidson during his attack on Elizabeth Warren