Another night of Eurozone Production Management Index (PMI) data and the downward trend in activity continues as expected. This summary from Markit Economic’s head economist:

The final reading of the August PMI confirms that the Eurozone manufacturing sector remains firmly in contraction territory. The rate of decline was a little slower than in July, providing some heart that the manufacturing downturn may be easing, but the sector is on course to act as a drag on gross domestic product in the third quarter.

“The national picture remains one of widespread contraction. Only Ireland saw manufacturing output rise, while larger nations like France and Germany remain in reverse gear. The situation in Italy is also becoming more of a cause for concern, as it falls further down the PMI league table.

“The ongoing weakness is unsurprising given that Eurozone manufacturers and their clients are still in a largely defensive mode. The uncertainty and cost caution resulting from the currency union’s ongoing political and debt crises are now being reinforced by softer global economic growth. This is hitting domestic markets, intra-area trade and overseas trade alike and is one of the main factors underlying the job losses and excess capacity signalled by the latest PMI survey.

“The broader long-run issue is that the Eurozone product and labour markets are unlikely to show any real sustained improvement until regional structural issues are addressed and the broader global backdrop brightens.

It’s an optimistic person who can find positives in the data with only Ireland managing expansion and the currently stressed economies continuing to be in deep contraction. Italy is looking particularly troubled. If we take a step back and look at some of the global PMI trends you can see why Ireland is still managing some expansion as its major trading partner is the US. It must be noted, however, that like Australia the country’s current account tends to be negatively offset by repatriation of profits to foreign residents: 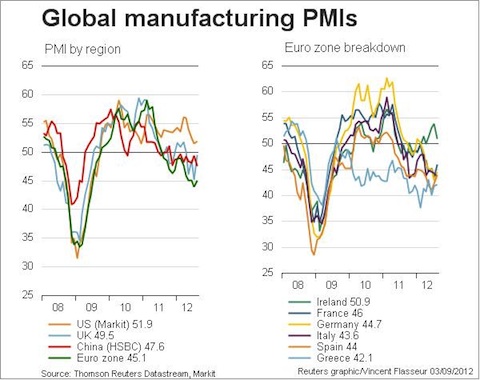 Outside of the Eurozone, the rest of the world appears to be in a synchronised fall with the US attempting to buck the trend on the back of its own internal consumer engine. China and the Eurozone are weakening with what looks to be an accelerating downtrend. It should also be noted that PMIs in the broader EU27 countries are showing similar trends with the Czech Republic, Turkey , Poland and Sweden all following. The later showing a particularly sharp fall in the latest data. 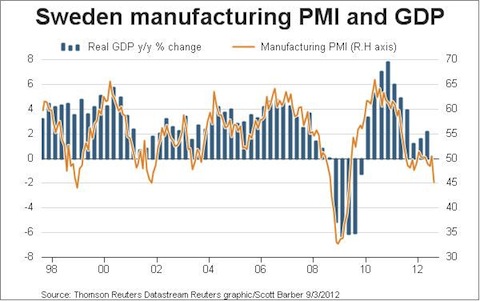 To the Eurozone report: 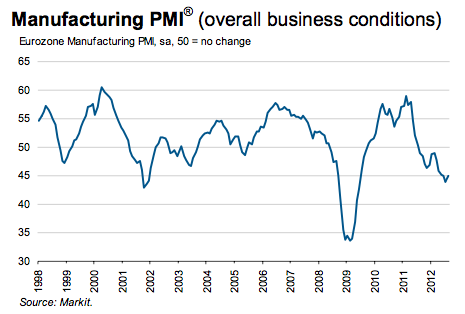 The Eurozone manufacturing sector contracted for the thirteenth successive month in August. At 45.1, up from July’s 37-month low of 44.0, the final Markit Eurozone Manufacturing PMI came in below the earlier flash estimate of 45.3.

Business conditions deteriorated in the vast majority of the national manufacturing sectors covered by the survey. The sole exception was Ireland, although even here the rate of expansion was less marked than one month ago. Downturns in Germany, France, Spain, the Netherlands and Greece all eased during August, but accelerated in Italy and Austria. Greece remained rooted to the foot of the Eurozone PMI league table. 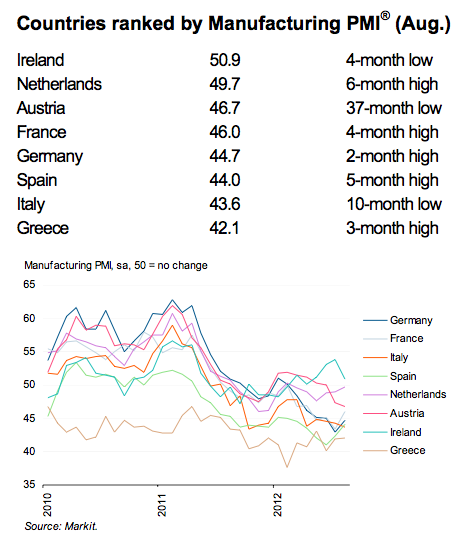 Manufacturing production was scaled back further during August, reflecting the long-running downturn in new business. Rates of contraction in output and new orders were both slower than in the previous month, despite being slightly faster than the earlier flash estimates.

Ireland was the only nation to report an increase in output during August. Modest contractions were seen in the Netherlands and Austria, but production continued to drop sharply in the other nations covered by the survey – including the big-four of Germany, France, Italy and Spain. However, Italy and Greece were the only countries to signal a faster rate of contraction than in July.

Eurozone manufacturers were hit by weaker inflows of new work from domestic markets, falling levels of intra-Eurozone trade and a broader softening of global economic growth. The level of incoming new export orders declined for the fourteenth month running in August, with the rate of contraction the steepest since November 2011. The steepest drops in new export business were registered in Germany and Greece, the fastest since April and January 2009 respectively.

Signs of excess capacity and cost cautious behaviour remained evident at Eurozone manufacturers during the latest survey period. Backlogs of work fell for the fifteenth straight month, despite reports of further job losses. Meanwhile, the ongoing downturns in output and new orders led to reduced levels of raw material purchasing and lower holdings of both pre- and post-production stocks. A solid improvement in average vendor lead times also highlighted the availability of spare supply-side capacity.

Employment fell for the seventh successive month in August, with Ireland the only nation to report an increase. However, the rate of decline across the euro area manufacturing sector was less marked than in the previous month (when payroll numbers were cut at the fastest pace since January 2010). The steepest reductions were reported in Spain, Italy and Greece, but Italy and Austria were the only nations to report steeper rates of job losses.

The individual national reports are below:

The Eurozone economy, and the rest of the world, waits for Thursday to see what monetary policy response Mario Draghi will enact. It is, however, becoming increasingly clear that although unconventional monetary policy may temporarily pause the crisis it will do very little for the real economies of the Eurozone nations. As I’ve stated previously there is still no credible plan as to how stressed euro-bound economies are expected to meet their on-going debt obligations as their economies shrink due to economic retrenchment stemming from fiscal austerity.

Mario Draghi has previously stated that one of the reasons for the need for renewed action is that sovereign yields do not correctly reflect the strength of national economies because factors not “inherent”, such as convertibility risk, also play a part. Although this maybe the case, I suspect perceptions of future economic performance play a much greater part and in that regard Mario Draghi appears to be facing an uphill battle. On Thursday we will also get composite PMI data, including services, that will give us the overall picture for the EZ.