Yves here. This is a crisp writeup of a clever little study. I hope it prompts more work in this area.

The presidential election campaign is in full swing in the US. Whoever wins the presidential race will face the challenge of filling top positions in the federal administration. Since some political appointees traditionally come from the private sector, allegations of conflicts of interest will emerge. But are connected firms really expected to profit? This column sheds light on this issue.

The presidential election campaign is in full swing in the US. Whoever wins the presidential race in November will face the challenge of filling top positions in the federal administration with political appointees. Inevitably, he will tap the reservoir of private-sector experts. And with that, allegations of conflicts of interest will emerge since some appointees come from firms that fall under the regulatory jurisdiction of the respective agency or from firms that may hope to win procurement contract awards. For example, on the very same day that President Obama tightened anti-lobbyist rules, he nominated Raytheon executive William J Lynn III as Deputy Secretary of Defense. The revolving door between industry and government is an old phenomenon but evidence on its consequences is surprisingly scarce. Whether and to what extent firms benefit from the political appointment of one its members largely remains a matter of speculations and anecdotes. This column sheds light on this issue.

Preferential Treatment Against All (Institutional) Odds?

Political appointees can treat their former employers preferentially in procurement, regulatory and oversight, or merger and acquisition decisions. Indirectly they can favour their former employers through long-term strategic planning or through better access to decision makers and information. At the same time, there are various institutional safeguards against conflicts of interests, ranging from specific provisions embodied in ethic codes to congressional committees and a vigilant free press. However, it is unclear how effective these safeguards are. Often, political appointees get waivers or simply fail to adhere to the rules. Time and again, political appointees were involved in decisions with immediate consequences for their former employer. For example, Senator Al Gore complained that Gerald Cann was responsible at the Navy for selecting a weapon system that he developed at his former employer General Dynamics: “It is a little wrong to be involved with a weapon system [in industry] and then be put in charge of deciding [at the Department of Defense] what system will replace the one that’s performing the mission now” (cited in Aerospace Daily 1991). Therefore, it is ultimately an empirical question, if firms benefit from political connections.

Assessing the Value of the Revolving Door

In a recent study (Luechinger and Moser 2012), we explicitly look at the value of the revolving door by using unique data on corporate affiliations and announcements of all Senate-confirmed US Defense Department appointees of six administrations. According to the results, investors clearly expect firms to profit from their political connections. The one- and two-day average cumulative abnormal returns amount to 0.82% and 0.84%. These estimates are not driven by important observations, volatile stocks, or industry-wide developments, and placebo events yield no effects. Effects are larger for top government positions and less anticipated announcements, i.e., announcements for which the actual nominee was not rumoured to be the main candidate. Figure 1 below displays the baseline results and the results for the less anticipated events together with the temporal pattern of average cumulative abnormal returns for the four trading weeks prior to and after the announcement day. 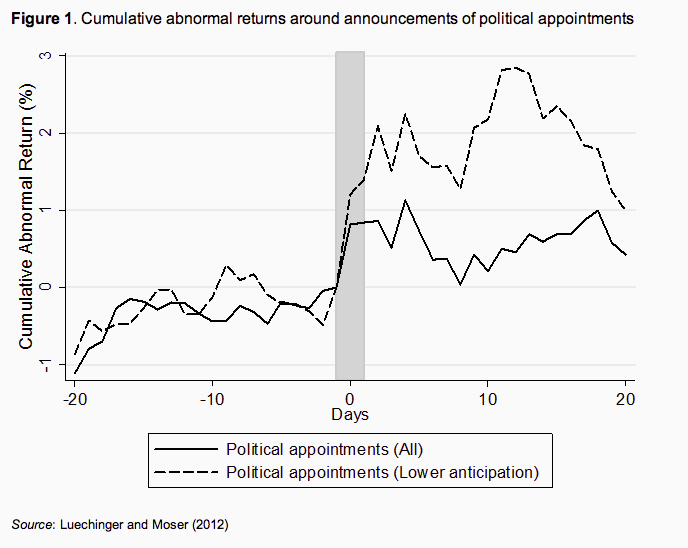 Overall, our results suggest that concerns over conflicts of interest voiced by politicians, the press, and government watchdogs are not unfounded. However, our results do not imply that recruiting political appointees from the private sector is necessarily a bad thing. Our results highlight one important cost of doing so but they are silent about potential benefits. Neither do our results suggest that tightening ethics regulations is worthwhile. Already now, they entail substantial compliance costs. But this is unlikely to happen anyway. Whoever wins the presidential race this time, neither of the candidates campaigned on the promise of closing the revolving door.

Luechinger, Simon and Christoph Moser (2012), “The Value of the Revolving Door: Political Appointees and the Stock Market,” KOF Working Papers No. 310 and CESifo Working Paper No. 3921.