This is Naked Capitalism fundraising week. 560 donors have already invested in our efforts to shed light on the dark and seamy corners of finance. Join us and participate via our Tip Jar or WePay in the right column or read about why we’re doing this fundraiser and other ways to donate, such as by check, on our kickoff post or one discussing our current target.

At least in the US, a series of attention-getting stories, Sandy, then the elections, then the immediate roll right into fiscal cliff gamesmanship, followed by the Patreaus/Allen scandal, have made finance news seem comparatively dull, even though the stock market is in a swoon thanks to the engineered fiscal cliff nailbiter And Europe keeps looking more and more jaundiced by the day.

The Economist has taken note of the fact that the normally staid corporate bond market is looking a bit frothy (hat tip Richard Smith): 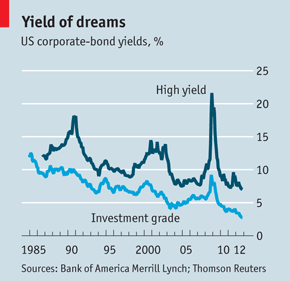 By the end of October global corporate-bond issuance for the year stood at $3.3 trillion, close to the record set in 2009. The pace has not slackened: Abbott Laboratories this week raised $14.7 billion, the biggest deal of the year, at maturities ranging from three to 30 years and with yields as low as 1.2%. The ease with which large companies can raise money is in sharp contrast to the plight of smaller businesses, which are still finding it hard to get finance from the banks….

The culprit is the notorious search for yield. Investors are holding their noses and taking risks they might ordinarily shun, since sitting in cash is too frustrating. And so far, the pile into corporate bonds has looked like a winning game: the article reports that returns for US corporate investment grade bonds have been a juicy 9.4% so far this year.

The problem with bonds is that despite the nice pop this year, risks are generally biased towards the downside in the form of credit risk and interest rate risk. While risk spreads are lower than they’ve been over the last five years, they are still better than in 2005 and 2006 (not that that is necessarily a great endorsement). Interest rate risk would seem to be the much greater hazard, but investors are confident that the powers that be will sit pat on rates till 2015, and will signal well in advance any intention of tightening. The reason for that practice was when Greenspan created a crash that produced more losses that 1987’s Black Monday, when he increased the Fed funds rate by 25 basis points in 1994 without any warning. Investors were so certain that yields were going to instead stay flat or fall that the rate increase triggered all sorts of derivatives losses, even among savvy players. That led to lots of headlines and hearings, but in the end, the industry beat back reform proposals.

Everyone seems so confident that any risks here can be foreseen and managed that it seems almost certain that too many investors will take the plunge and too many will get out too late. And the implicit bet is that ex some fiscal cliff perturbations, we’ll have clear, if slow, economic sailing through at least 2015. We’ll see how this comparatively cheery bet works out.

Update: Walter Kurtz points out that corporate bond spreads have widened a bit in the last month, but he calls this taking some chips off the table in light of the fiscal cliff negotiations. This does not seem to be a rethinking of the fundamentals as much as professional fund managers avoiding reporting undue volatility, something pension fund consultants dislike.