Yves here. We’ve flagged in earlier posts how the Spanish banking crisis had the potential to become destabilizing politically, as if Spain wasn’t already at considerable risk of upheaval. Spanish depositors were pushed to convert their deposits into preference shares, which they were told were just as safe. That of course was never true.

This was a simple desperation move by the banks to save their own skins, customers be damned, by raising equity from the most unsophisticated source to which they had access. And now that that gambit failed, these shareholders are due to have those investments wiped out unless the Spanish authorities can cut a deal to spare them. The conditions of a bank rescue, which Spain did try to resist, was to have equity holders wiped out, or at least haircut. And that plan is now about to be set in motion. Having losses imposed on small savers who were in many cases conned by their own bank to buy these preference shares is going to do serious harm as well as further delegitimate the government.

Back in July this year I mentioned that the new Memorandum of Understanding for the bailout of the Spanish banking system was going to include a special purpose vehicle (a “bad bank”) which would allow the banking system to offload non-performing assets. In October I posted on the structure of that bank, which would be called “Sareb”, and exactly how assets would be transferred.

As I mentioned in that July post, one of the critical points about the Spanish banking system is that Spanish banks had been successful in persuading ordinary citizens to switch their deposits into preferred shared and hybrid securities which, in the case of the enactment of the MoU, would force them to be “bailed-in”.

Overnight the European Commission approved the enactment of the MoU which have indeed triggered substantial bail-ins for Spain’s citizens. On top, Spanish banks will be forced to shrink, shed thousands of jobs and restructure their balance sheets over the coming years:

Four failed Spanish banks including the nationalised giant Bankia have been rescued by the eurozone’s bailout fund in exchange for brutal cuts to their workforces, branch networks and balance sheets as tens of thousands of small retail bondholders were also hammered.

Bankia, Catalunya Banc, Novagalicia and Banco de Valencia were set to shed more than 10,000 jobs in return for receiving €37bn (£29.9bn) to clean out toxic real estate assets that will be transferred to a Spanish “bad” bank.

The news came on the heels of OECD forecasts that see unemployment rising above 6 million people next year as the recession-hit country continues to slash government spending, with a jobless rate set to reach 27%.

The harsh conditions imposed by Brussels will force the former savings banks to return to their origins and concentrate on looking after the money of small businesses and families after a decade in which they grew fat on the back of a residential housing boom that left them badly exposed when the bubble burst.

The banks must shrink their balance sheets by 60% over five years and immediately sell off €45bn of real estate assets to the Sareb bad bank at average discounts above 50%.

FT reports that holders of Bankia’s preferred shares will see a write-down of 39%, perpetual subordinated debt 46% and subordinated debt 14% and the total bail-in is expected to reach €10bn. As you can see from the article the banking system has been granted €37bn in order to support the restructure of Group 1 banks but there is more to come.

As of June 2012 there were already €170bn of bad and doubtful debts in the Spanish banking system and this figure has risen since as every month the percentage of bad debts sets a new record and the trend is accelerating. Bankia itself forecasts a €19bn loss this year.

Although ultimately the restructure of the banking system is a positive step, the political fallout from this event is definitely something to keep your eye on. Not only have Spanish citizens now lost billions in savings, but the shrinking of the banking system will lead to tens of thousands of well paid jobs going. In an economy already suffering 25% unemployment this is a potential political firecracker especially given the €37bn will be added to the Spanish national debt which is again something Spanish citizens will have to deal with. Something I noted back in July.

In other Eurozone banking news, the ECB released the October report on monetary developments overnight. The news wasn’t all bad with a possible bottoming of private sector credit growth, although it is difficult to see this as anything more than a brief up-tick given other data:

This data is leading to an increased spread between M3 growth and private sector credit growth as seen in the chart below: 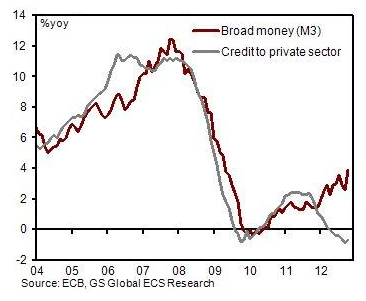