I note that we still haven’t heard from the Euro group meeting about what the exact plan is for Greece. As I said, my expectations are that a ‘deal’ will be stitched together at the last minute to ‘kick the can’ further down the road because I can’t see northern creditors having the political will to admit to their own taxpayers that real losses are inevitable at this time. The big question is whether the IMF is going to accept whatever the ‘deal’ ends up being. But if they are going to stick to their policy that the program needs to credibly deliver a government debt to GDP of 120% by 2020 it hard to see how they can.

Today I thought it was timely to have another look at the Greek economy from a sectoral balance perspective which will hopefully provide some clarity on exactly what we are seeing in Greece, but just as importantly also provide some broader context to the likely outcomes for other Eurozone periphery nations with similar economic dynamics.

As you maybe aware, my overall assessment of the current Troika programs is that the policy implementation is far too one-sided and simultaneously forcing large fiscal adjustments on euro-bound nations that are already highly indebted and possess structural current account deficits is likely to be counterproductive without significant debt write-downs.

The premise for the Troika programs is that internal devaluation will make supported nations more competitive and therefore lead to an export driven recovery. This however, ignores two points.

Firstly, without investment in the tradeable sectors to support the structural transformation and increased productivity the only point of adjustment is wages and employment which means that servicing existed debts held by the private sector becomes impossible (I discuss this point here). Secondly, if large sections of each countries export sectors are all attempting the same thing there will be significantly lower external demand to support this adjustment.

The likely outcome therefore, as I’ve covered previously in terms of sector flows, is:

So with the external sector in this state and the private sector unable and/or unwilling to take on additional debt as it attempt to mend its balance sheet … the only sector left to provide for the short fall in national income is the government sector. If it fails to do so then the economy will continue to shrink until a new balance is found between the sectors at some lower national income, and therefore GDP.

It may appear logical to you that this must occur, and I don’t totally disagree, but that doesn’t change the fact that under these circumstances there is simply no way that the private sector will be able to continue to make payments on the debts it has accumulated during the period of significantly higher income. This is a major unaddressed issue.

If we look at the data in the case of Greece this is exactly what we see. 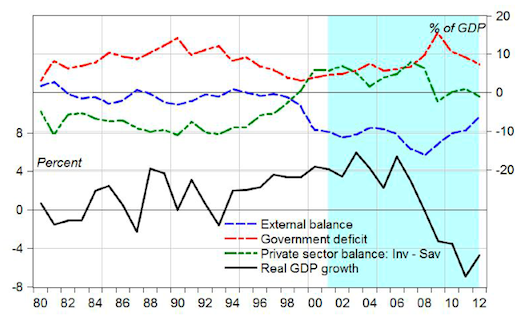 As you may notice we are now seeing a reversal in the external balance which means the current account is starting to move out of deficit. In fact over recent months the Greek government has been reporting a current account surplus:

Greece’s current account balance showed a surplus for the third month in a row in September, when it reached a surplus of 775 million euros, compared to a deficit of 1.1 billion euros a year earlier.

“The trade deficit excluding oil and ships shrank due to the considerably reduced import bill (down by 726 million euros or 30.3 percent), despite the fact that export receipts fell by 213 million euros or 15.9 percent in September 2012.

This sounds positive but , as always, concentrating on a single metric can give false impressions and it is important to understand exactly what is occurring “under the hood” as it were.

What you may have noticed from the sector chart above is that Greece has had a fairly long running current account deficit, which started to accelerate in the second half of the 90s. This corresponded with the move to a negative net saving position by the private sector and also a marked increase in GDP growth. What this implies is that the private sector began to take on increasing levels of debt funded through external borrowings, which also allowed government deficits to begin to fall over the same period while the economy grew.

Followers of the Australian economy may recognize this dynamic as similar to the “Howard years”. The problem is, of course, that this is GDP driven firstly by a dis-saving in the private sector and, if continued, increased private sector indebtedness. As we know, again from Australia, this can continue as long as direct investment, portfolio flows and net lending to the financial system from foreign sources continues, mostly via surplus recycling, and the private sector is willing, and able, to continue on this path. This is a major concern for Australia in terms of the end of its capex boom (I discuss this here) but a point of difference is that Australia has a cushion of a floating currency in regards to its creditors, Greece does not.

As you can see from the chart this all came to a screaming halt around 2007 when the GFC struck and Greece’s private sector was forced to re-enter a state of net saving. This was initially met by an increase in government deficit but austerity programs quickly turned this around and, as I explained above, this led to a situation where the only possible outcome was a fall in GDP while the sectors found a new equilibrium.

Debt of GDP is quite obviously governed by two factors of the level of debt and GDP growth and with the later falling rapidly ,and transfers from the private sector to the government made impossible by existing indebtedness, the only possible outcome is what you see in the chart below:

So what does this tell us?

Firstly, it shows that the Greek crisis was not just an issue with the government sector, but was likely caused by a long running structural issue in which economic growth was being funded by increasing foreign borrowing by the private sector.

Secondly, although the current account is now approaching surplus it is nowhere near the required magnitude to drive economic growth. Without renewed private sector indebtedness or an increase in foreign investment, both unlikely, GDP will continue to shrink driving national debt to GDP higher. Although the current Troika plan hinges on a growing current account surplus led by exports, subdued external sector demand from Greece’s existing trade partners make this unlikely.

Thirdly, given that both the government and private sectors have been net debtors to the external sector the write-down of existing debts or the transfer of non-financial assets is really the only way meet the current parameters of the Troika program.

Fourthly, Australia can learn some lessons from this woeful episode of financial mismanagement.