Yves here. This VoxEU post gives a back-of-the-envelope estimate of the odds of Greek exit from the Eurozone. In case you find the result to be reassuring, in the runup to the financial crisis, yours truly pegged the odds of a very very bad outcome at 20% to 30%, which I considered to be scarily high given the consequences (mind you, I didn’t see the alternative as good outcomes, merely less than a full blown Japan-style bubble aftermath). Keep in mind that the conventional wisdom among most economists and Eurocrats is that the cost to Greece of leaving to the country itself is so high that it will never happen. But revolutions also typically make conditions for ordinary people much worse before any improvements take place. When people are desperate, they will lash out against their perceived oppressors. Whether Greece gets to that point, and how it would escalate, are very much open questions.

Fears about a Greek exit from the Eurozone reached a peak around May 2012. At the time, the first round of the Greek election gave the populist Syriza party enough support for it to block the formation of reform and a bailout-friendly government.

How much people focus on the risk of a Greek exit at any given point in time can be quantified by tracking the volume of news reporting on the issue. Figure 1 shows a specific metric derived from counting news stories on the Bloomberg system.

Figure 1 Frequency of “Greek exit” in the news 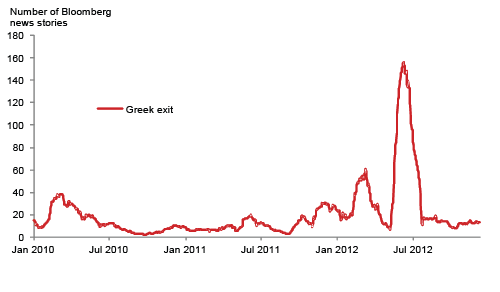 It is clear that the concerns about a Greek exit, as reflected in the intensity of news coverage, have receded notably from their peak in the early summer period.

In the run-up to the launch of the euro in 1999, it was common to look at asset prices and derive implied probabilities of Eurozone entry (see Favero et al. 1999, De Grauwe 1996). A typical approach was to look at forward rates for individual countries and use the deviation from German forward rates to solve for the probability of EMU entry (using various assumptions about the counter-factual scenario).

The analytical challenge at the current juncture is that country-specific financial market instruments for Eurozone countries reflect various risk premiums simultaneously. This makes it difficult to reliably identify the part of the risk premiums that specifically pertain to Eurozone exit risk. This is the case both for credit default swaps instruments and for sovereign bonds. Spreads on these instruments reflect both sovereign default risk and currency risk in an exit scenario1.

Another route to estimating the probability of exit (and therefore currency redenomination) would be to look at the pricing of comparable foreign law and local law bonds. Since foreign law bonds are outside the legal domain of a given country, they are harder to redenominate in an exit2. Hence, one would expect local law bonds to trade at a discount relative to foreign law bonds, reflecting the additional currency risk. But such an interpretation of the foreign-law-local-law bond spread requires that the default risk in the two bonds is the same, and this may not always be a realistic assumption. Additionally, after the Greek debt restructuring, there are essentially no local law government bonds left in Greece.

In short, there currently is no reliable financial market-based metric from which we can derive the implied probability of a Greek exit from the Eurozone.

Spread-betting metrics, on the other hand, do provide relatively direct metrics of the probability of some form of Eurozone breakup. For example, customers of the spread-betting firm InTrade can bet on whether exit by a current Eurozone member country will or will not happen by end-2013. The probability of a form of Eurozone breakup is determined from the supply and demand of such bets.

One should be aware that spread-betting markets are generally less liquid than traditional financial market instruments. Nevertheless, it is interesting to observe that InTrade has shown a clearly declining probability of Eurozone breakup over the last few months.

Figure 2 Expected probability of a Eurozone break-up has declined (%) 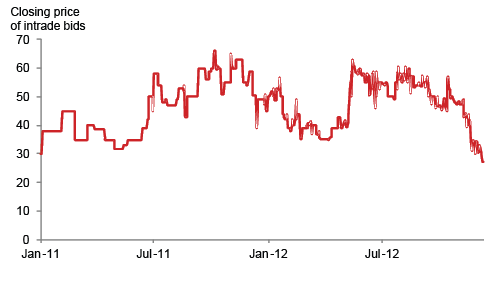 As the chart shows, the probability of a Eurozone breakup by 2013 was above 60% in the summer, and has now dropped below 30%. However, this probability embeds multiple exit scenarios. Some of the decline is due to reduced risk of exit by other Eurozone countries, such as Spain5.

Most would agree that the risk of exit by 2013 of ‘other Eurozone countries’ – countries that feel they are being dragged down by the Eurozone’s crisis-stricken countries – has been significantly reduced as a function of the outright monetary transactions programme, as well as by favourable political developments in countries such as Holland. To illustrate, if we put the probability of exit of other Eurozone countries at 5-10%, the implied risk of a Greek exit would stand at 17-22%.

How does an exit probability of approximately 20% fit with the political situation in Greece? 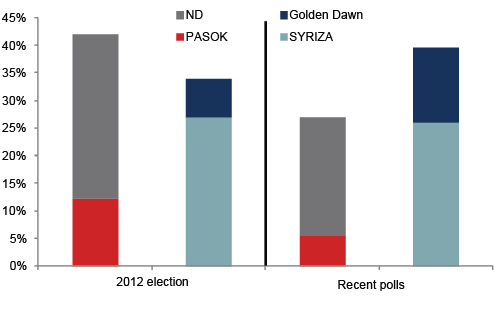 Recent opinion polls consistently put SYRIZA ahead of New Democracy. Meanwhile, Golden Dawn, an extreme right party, stands to become third largest, well ahead of PASOK. Since the largest party gets 50 bonus seats in the Greek parliament under current electoral law6, a SYRIZA victory could potentially even yield it an outright majority. The probability of SYRIZA taking office in an early election is therefore around two thirds, based on current information.

An early election could be triggered by a number of events. Failure of the current government to approve future conditions from the Troika during quarterly reviews in 2013 is one route. A gradual bleeding of MPs from ND, Pasok and Democratic Left, which would cause the current coalition to lose its majority, is another route. It is hard to estimate the cumulative risk of early elections, but an estimate of around 25% would not seem wide of the mark.

If the probability of early elections is around 25%, and if a SYRIZA victory has a probability of around two thirds, this implies that the likelihood of a SYRIZA led government is a touch below 20%7.

The probability of a Greek exit – around 20%, as implied by InTrade spread-betting data – is perhaps slightly higher than what we can derive from an assessment of political risk in Greece. Nevertheless, both estimates are in the same neighborhood, suggesting a Greek exit risk to be in the region of 15-20%.

Policymakers cannot claim victory in the Eurozone crisis just yet. The ECB’s outright monetary transactions program has helped to reduce funding risks for sovereigns. Linked to this, the risk of disorderly default – and exit from the Eurozone – has also been reduced. But political risk remains a serious concern, and this risk cannot be addressed through liberal liquidity provisions. Moreover, continued weak growth in the region has the potential to fuel populist sentiment, implying that political risk may be rising.

With respect to Greece, the opinion polls point to a highly unstable political climate. This indicates that early elections, should they be called, could cause a dramatic resurfacing of Eurozone exit fears.

Importantly, political risks are not confined to Greece, as demonstrated by recent developments in Italy. The conclusion is that ‘political events’ are set to increasingly drive Eurozone asset prices. Thus, we are in a different situation to where we were in July 2012, when the ECB had yet to articulate a mechanism to contain sovereign funding risk. Since political risk is hard to quantify for investors, this creates a persistent sense of unease. The implication is that Eurozone financial assets will continue to embed significant risk premiums in 2013 and beyond.