The Wall Street Journal has an exclusive story based on a whistleblower leak, apparently with supporting transaction records.

In 2008, Deutsche Bank made very large bets instruments linked to one, three, and six month dollar, euro, and sterling Libor, that differential between one month rates versus the three and six month tenors would widen as the crisis became more severe. The German bank reportedly made over €500 million on these trades.

What is significant is that these were very large wagers, particularly at a time when most banks were desperate to shed risk. This is the guts of the story:

The documents from the former Deutsche Bank employee set out how traders in London and New York working for the German bank’s global-finance unit successfully bet that borrowing costs in euros, U.S. dollars and British pounds over three- and six-month periods would rise faster than one-month interest rates because of deepening stress throughout the global financial system. 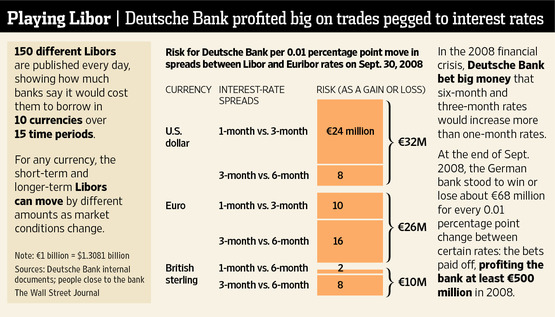 The former employee has told regulators that some employees expressed concerns about the risks of the interest-rate bets, according to documents. He also said that Deutsche Bank officials dismissed those concerns because the bank could influence the rates they were betting on.

Naturally, Deutsche Bank officials deny the allegations. So as damaging and plausible as the charges seem (who would take such a big bet then if they weren’t confident they had some sort of advantage?), unless the source can provide some sort of supporting evidence, this is “he said, she said,” and the matter will shake out in the German bank’s favor.

One has to wonder why the bank is going to extreme lengths to disprove a conspiracy to manipulate rates. Again from the Journal:

Deutsche Bank hopes to persuade regulators to delay talks on a potential settlement until the bank completes its internal probe later this year, according to the people close to the bank.

Regulators have ordered banks to trawl through emails, chat messages and phone records dating back at least several years. The internal probe by Deutsche Bank began in May 2011, about three years after U.S. regulators began probing Libor.

The internal probe has been arduous because Deutsche Bank is inspecting thousands of trades between 2005 and 2011, including the big interest-rate bets detailed in the documents from the former employee.

The internal inquiry goes beyond looking for “smoking gun” emails or messages such as those exposed by regulators in their settlements with UBS and Barclays. Deutsche Bank is trying to match traders’ emails and chats with messages from clients and outside brokers, aiming to detect any subtle conspiracy to fix rates, said the people close to the bank.

The hunt to essentially prove the negative—that a specific person wasn’t trying to rig rates—explains why the bank-led internal probes are taking so long, said one of those people.

Deutsche seems unusually concerned about liability, which gives the impression they have something to hide. Firms also vary a fair bit in terms of how openly staffers express themselves; one of the reasons that Congressional investigations of particularly toxic Goldman CDOs turned up comparatively little dirt is that Goldman has a very buttoned-down culture. The same deals at other firms would have had a lot more in the way of sniggers and trash talk about the deals and the clients dumb enough to buy them in the records. Libor diddling seemed to be sufficiently widespread in 2005 to 2007 that it seems unlikely that any Deutsche trader would have been careful about covering his footprints….but if one had wanted to be, I can imagine it would not have been hard (limiting discussions to face to face meetings, not using the firm phones, etc And that’s the easy stuff. I had a probably deservedly paranoid buddy who did business in Russia go on about how to leave messages on Usenet groups in ways that no one could figure out the hidden communication).

So as much as the pattern of Deutsche’s activity looks sus, the whistleblower’s claims are likely to be stared down by the banks unless others come forward reporting that they heard the same thing from managers in a position to know . Then, of course, the German bank would simply change course and try to depict them as simply being wrong, or if that failed, painting them as rogue actors. In other words, I don’t see the odds as high that the source will be deemed to have the goods, even if what he is saying is completely accurate. I’m expecting these times to generate a new cliche, along the lines of “you can’t beat City Hall” to describe the futility of trying to prove that a major bank really did engage in bad behavior.