One of the canards libertarians like to sell is that the state has a monopoly on violence.

They need to get a handle on some basic economic concepts, for starters:

Those three alone, which operate in many fields of commerce, means that the natural of that industry will be towards fewer and more powerful players, unless something intercedes (such as disruptive technology that changes industry boundaries or regulation). Fewer and more powerful players means oligopoly or monopoly pricing, which even neoclassical economists will admit happens and depict as a Very Bad Thing. This reason alone is why the overwhelming majority of economists that say they are in favor of “free markets” favor regulation to make them work properly. This is one of the many reasons we describe “free markets” as an oxymoron.

Concentrated power allows companies to behave thuggishly, sometimes in a literal rather than figurative manner. It is remarkable how, in the US, the story of the physical risks that early labor organizers and protestors took has been virtually airbrushed out of the record. For instance, from Strikebreaking and Intimidation: Mercenaries and Masculinity in Twentieth Century by Stephen Harlan Norwood: 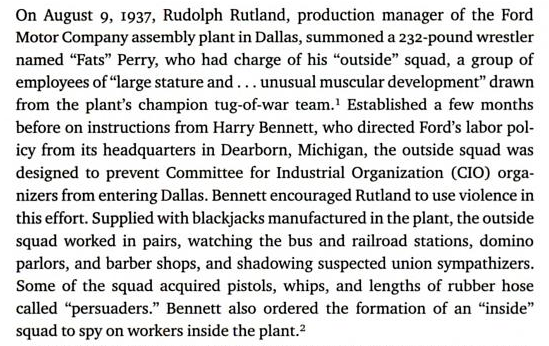 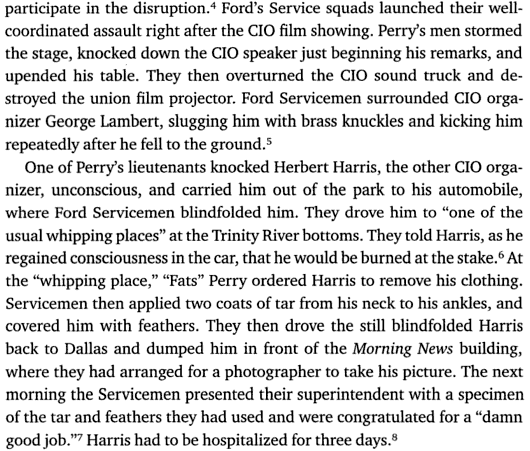 Don’t kid yourself into thinking that this was an isolated incident. This was what the NLRB later described as Henry Ford’s war on unions. Bennett built the world’s largest private army. And it was not as if he was wanting for competition. GM and Chrysler also had their hired goons, but they worked through intermediaries to keep their hands cleaner.

Consider this Wikipedia description of Pinkerton:

At its height, the Pinkerton National Detective Agency employed more agents than there were members of the standing army of the United States of America, causing the state of Ohio to outlaw the agency due to fears it could be hired as a private army. Pinkerton was the largest private law enforcement organization in the world at the height of its power.

During the labor unrest of the late 19th and early 20th centuries, businessmen hired the Pinkerton Agency to infiltrate unions, to supply guards to keep strikers and suspected unionists out of factories, and sometimes to recruit goon squads to intimidate workers. The best known such confrontation was the Homestead Strike of 1892, in which Pinkerton agents were called in to enforce the strikebreaking measures of Henry Clay Frick, acting on behalf of Andrew Carnegie, who was abroad; the ensuing conflicts between Pinkerton agents and striking workers led to several deaths on both sides.

And powerful employers intimidating workers with the threat of violence is hardly a thing of the past. As the Independent reports (hat tip Richard Smith):

Amazon is at the centre of a deepening scandal in Germany as the online shopping giant faced claims that it employed security guards with neo-Nazi connections to intimidate its foreign workers.

Germany’s ARD television channel made the allegations in a documentary about Amazon’s treatment of more than 5,000 temporary staff from across Europe to work at its German packing and distribution centres.

The film showed omnipresent guards from a company named HESS Security wearing black uniforms, boots and with military haircuts. They were employed to keep order at hostels and budget hotels where foreign workers stayed. “Many of the workers are afraid,” the programme-makers said.

The documentary provided photographic evidence showing that guards regularly searched the bedrooms and kitchens of foreign staff. “They tell us they are the police here,” a Spanish woman complained. Workers were allegedly frisked to check they had not walked away with breakfast rolls.

Another worker called Maria said she was thrown out of the cramped chalet she shared with five others because she had dried her wet clothes on a wall heater. She said she was confronted by a muscular, tattooed security man and told to leave. The guards then shone car headlights at her in her chalet while she packed in an apparent attempt to intimidate her.

Several guards were shown wearing Thor Steinar clothing – a Berlin-based designer brand synonymous with the far-right in Germany. The Bundesliga football association and the federal parliament have both banned the label because of its neo-Nazi associations. Ironically, Amazon stopped selling the clothing for the same reasons in 2009.

ARD suggested that the name “HESS Security” was an allusion to Adolf Hitler’s deputy, Rudolf Hess. It alleged that its director was a man, named only as Uwe L, who associated with football hooligans and convicted neo-Nazis who were known to police. The programme-makers, who booked in at one of the budget hotels where Amazon staff were housed, said they were arrested by HESS Security guards after being caught using cameras. They were ordered to hand over their film and, when they refused, were held for nearly an hour before police arrived and freed them. The film showed HESS guards scuffling with the camera crew and trying to cover their lenses.

Notice that the goons held the filmmakers and the police “freed” them? That’s unlawful detention.

For German-speakers, here is the program for your viewing pleasure, and a local report, with lots of reader comments.

So, Virginia, businesses can get too powerful and inflict violence to get its way. But you’ll never hear that from libertarians.