Bethany McLean just released a piece at Reuters which presents a good overview of the Department of Justice case against rating agency Standard and Poor’s for its conduct in rating residential mortgage backed securities and CDOs.* The high level description of the case, in particular, why the government used FIRREA (a statute designed to protect federally insured banks against fraud) as its cause of action, is helpful.

I have mixed feeling about taking issue with McLean, since she generally does a fine job of reporting and analysis, but there were some things about her piece that were so surprising that I thought they really needed to be discussed.

Now there are reasons to dislike the case. The biggest in my mind is why it has taken so long. The Feds have been cautious and slow about launching any cases, consistent with their “don’t rock the boat, and don’t threaten any big financial players fundamentally” posture. Frankly, the media does not give enough credit to Ed DeMarco of the FHFA, whose putback suits against 17 servicers have the potential to claw $200 billion back. This suit, and not DeMarco’s refusal to have the GSEs offer principal mods to investors, is almost certainly the reason Obama was keen to replace him (highly unlikely now give the recent adverse appellate court ruling on recess appointments). While S&P could be hit with serious damages, none of the Obama-administation launched suits were anywhere near as threatening to a major financial player.

So what are McLeans’ beefs? She had three core ones:

1. The case presents the banks as victims, which is “weird” (Jonathan Weil at Bloomberg voiced similar reservations)

2. S&P didn’t make all that much on these deals, so why them?

“Weird” is a rather imprecise objection. It’s pretty widely known that the ratings agencies First Amendment defense, as nutty as it seems, has proven remarkably effective. Using FIRREA might enable the Feds to surmount it. This is as weird as going after Al Capone for tax evasion.

As for the aesthetics, that the FIRREA requires that the banks be depicted as victims, it depends on what you mean by “bank”. In fact, producer level employees (heads of profit centers) at all save well run firms (that list probably stops at Goldman**) are seeking to maximize their returns, and that often includes gaming the firm’s systems and pay policies. This is why Bill Black’s accounting control fraud idea is inadequate when dealing with a financial firm that has large trading operations. The looting occurs not just at the executive level, but also at the profit center level. Hence the expression, “IBG, YBG” for “I’ll be gone, you’ll be gone.” That refers to the widespread practice of doing business or putting on trades that show profits this year but have good odds of blowing up down the road.

So what really happens is the traders and other producers are out to maximize current year apparent profits, the hell what happens later. So the folks who ran the RMBS and CDO operations were in cahoots with the ratings agencies.

Did senior management understand what was going on? McLean says Citigroup might indeed have been duped. I’m surprised she didn’t include Merrill (not specifically in relationship to the suit, since only federally insured banks are concerned, but as an example of a type). The firm made a decision to triple its CDO business in 2006 over the warnings of a well regarded MD who was effectively forced out. That decision left Merrill holding a lot of drecky CDOs when the music stopped. In Europe, all the major dealer banks that had adopted Basel II saw AAA rated CDOs being used to game bonus systems. The higher-ups never questioned their value until it was too late. Look at the change in haircuts on AAA CDOs: 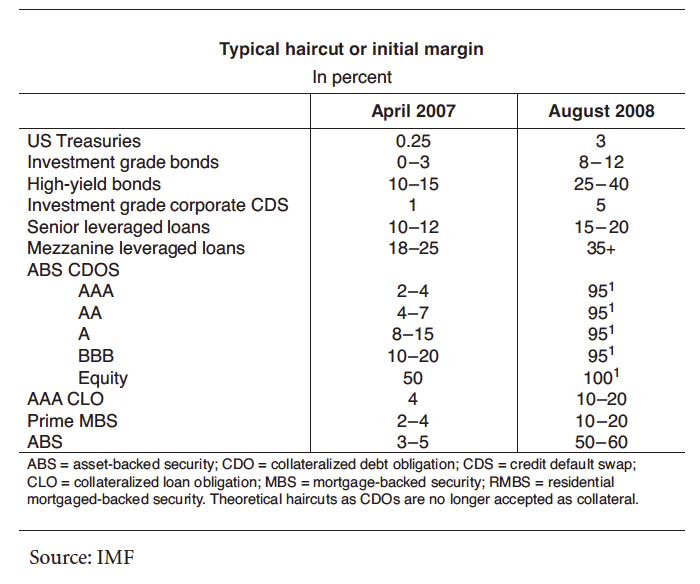 A haircut of 95% effectively means no one will take it.

What about the firms that weren’t as dumb as the Europeans or Merrill and Citi? The other pattern is that management was a quiet co-conspirator with producer abuses. After all, the more profitable a firm looked, the bigger the bonuses they got too. Key to this strategy was having large, busy, but politically weak risk management departments. So management could pretend it didn’t know there was gambling in Casablanca, indeed, it had taken efforts to prevent gambling. Right? So again, the victim was the “bank” but in this case we mean the firm as distinct from the people operating it. As Sallie Krawchek observed back in her days as a securities industry analyst as Sanford Bernstein, it’s better to be an employee of a Wall Street firm than a shareholder in them.

Now let’s go to McLean’s second objection: the profits were minuscule compared to the possible damages. Isn’t there something wrong with this picture? Actually, no. In fact, this is another fundamental Wall Street design factor. Diffuse responsibility as much as possible and park as much as you can with firms or entities that have little in the way of a balance sheet. After all, the whole point is for the people who made the serious money to keep it!

One version of this approach was in the use of CDO managers. As you may recall, banks had this nasty of designing CDOs that were meant to fail for their own purposes (to get the garbage off their balance sheets) or on behalf of subprime shorts. Here is what we wrote about who might have liability on deals created by the hedge fund Magnetar in ECONNED:

Anyone involved in these transactions probably understood the implicit logic, even if no one acknowledged it. But there is a remarkable absence of anyone who could be pinned with liability. Magnetar officially had no legal relationship to these deals. The investment bank packager/structurer was off the hook as long as he made reasonable disclosure (and remember, the standards are much lower here than for instruments that fall in the SEC’s purview). The rating agencies get off scot-free, thanks to their First Amendment exemption (discussed in chapter 6). The lawyers involved in the deal are responsible only to their clients, meaning the structurer/packager, and cannot be sued by unhappy investors. The only party on whom liability could be pinned is the CDO manager.

And who was the CDO manager? Typically a shell with pretty much no equity. The joke was that the typical CDO manager was two guys with a Bloomberg terminal.

What about McLean’s third objection, why no suit against Moody’s? Well, it actually does not make sense to sue a bunch of firms at once, believe it or not. The FHFA filing suit against 17 servciers at once is unusual and driven by statute of liability concerns. You want to get at least one case under your belt if your are using a new legal theory (which the DoJ most certainly is) before you go after other targets.

Moreover, there is reason to think, despite the fact that it engaged in precisely the same conduct, that Moody’s might be a harder nut to crack. If you’ve been following the case, it is built largely on damaging e-mails.

Brian Clarkson, first the co-head of the structured credit group and later CEO of Moody’s, succeeded in creating a reign of terror. That may sound like an exaggeration, but there are ex-Moody’s people who have him in the “he who must not be named” category, like Voldemort. This is an extract from the Financial Crisis Inquiry Commission testimony of Mark Froeba:

But Moody’s primary tool for implementing the culture change was a person not a technique, Brian Clarkson. In this task, Brian was especially adept at threats of employment termination. As my former colleague at Moody’s, Richard Michalek testified before the Senate Permanent Subcommittee on Investigations about Brian:

[Any] discussion of his management style included the words ‘fear and intimidation’. That description was periodically reinforced by the terminations of one or another of his managing director reports who had in some way failed to fulfill the express or implied expectations. The effect was only the more chilling when he was heard to say ‘it’s not personal, its only business’.

I think I can say, with only a little exaggeration, that I have heard Brian conjugate the verb ‘to fire’ in moods and tenses most grammarians do not even know exist. In my ten years at Moody’s, I do not think I had three consecutive encounters with Brian in which he did not threaten to fire someone, describe someone he had fired or identify someone he should have fired. However, several anecdotes are memorable.

Brian was notorious within Moody’s for a joke he told that would not have been funny even if it had been a joke: that his only regret in firing 20-some people from Moody’s RMBS Group was that one of them got a job before he could fire him. I am sure that few of us who heard him believed he had any regrets.

Brian even threatened to fire people before he had hired them. When I interviewed with Moody’s in September of 1997, he spent almost half of our meeting telling me about people he had fired and why.

Now why is Clarkson relevant? He was abusive, but he was also extremely protective of his and the firm’s image. People I know who left Moody’s before the Clarkson era was in full swing think that it’s likely that Brian would make sure that if he caught anyone saying something like the famous S&P email where a firm employee complained that they’d rate a deal if it was structured by cows, Brian would at least harangue them and make sure everyone knew not to denigrate the firm’s work in emails. So if this theory is correct, there won’t be as much readily-findable dirt at Moody’s. The DoJ will have to depose former staffers, which is a more costly and time consuming process.

Yes, I’d much rather see the officialdom going after executives at big banks. But the ratings agencies were and are an essential part of the toxic asset creation factory. It’s still useful to mount a case against them, even if their First Amendment protection means it’s not the straightforward sort of action many of us would like to see.
_____
* I hope readers will refrain from the “this suit is retaliation against the S&P downgrade of the US” line. Anyone who runs that line has not done the most basic fact checking. The investigation of S&P was launched before the downgrade threat. Jane Hamsher has examined the timeline in detail and argued that the downgrade threat was an effort by S&P to ward off legal action.

**Goldman is a well run shop. To what end the firm is operated is another matter entirely.