Yves here. The viewpoint expressed in this article will not go over well in some circles, since the BRICs have insisted that they have the same right to pollute as much as first world countries did in getting to their living standard. But the problem is the planet cannot remotely support everyone in emerging economies living at first world living standards, at least the way we produce them now. And that isn’t operative only the energy and greenhouse gasses fronts. We’ll all need to eat lower down on the food chain as well.

By Patrick Bond, a political economist with longstanding research interests and NGO work in urban communities and with global justice movements in several countries. He teaches political economy and eco-social policy, directs the Centre for Civil Society and is involved in research on economic justice, geopolitics, climate, energy and water. Cross posted from Triple Crisis

As they meet in Durban on March 26-27, leaders of the BRICS countries – Brazil, Russia, India, China and South Africa – must own up: they have been emitting prolific levels of greenhouse gases, far higher than the US or the EU in absolute terms and as a ratio of GDP (though less per person). How they address this crisis could make the difference between life and death for hundreds of millions of people this century.

South Africa’s example is not encouraging. First, the Pretoria national government and its Eskom parastatal electricity generator have recently increased South Africa’s already extremely high emissions levels, on behalf of the country’s ‘Minerals-Energy Complex’. This problem is well known in part because of the failed civil society campaigns against the world’s third and fourth largest coal-fired power plants (Eskom’s Medupi and Kusile), whose financing in 2010 included the largest-ever World Bank project loan and whose subcontractor includes the ruling party’s investment arm in a blatant multi-billion rand conflict of interest.

Other climate campaigns have made little dent against the guzzling mining and smelting industries which chew up South Africa’s coal-fired electricity and export the profits. The same is true for the high-polluting industries of the other BRICS countries, even in China where environmental protests are rising and where it is unsafe to breathe Beijing air on the majority of days so far this year.

How bad are the BRICS? The 2012 Columbia and Yale University Environmental Performance Index showed that four of the five states (not Brazil) have been decimating their – and the earth’s – ecology at the most rapid rate of any group of countries, with Russia and South Africa near the bottom of world stewardship rankings.[1] And China, South Africa and India have declining scores on greenhouse gas emissions, according to the EPI. 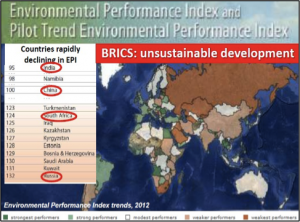 While BRICS fossil fuel addiction is well known, less understood is how their heads of states consistently sabotage global climate talks hosted by the United Nations Framework Convention on Climate Change (UNFCCC) by effectively destroying the Kyoto Protocol – in everything but name – starting with the Copenhagen Accord in 2009, picking up the pace with the Durban Platform in 2011, and sealing the deal in 2012 with Russia’s formal withdrawal from Kyoto.

In 2009, the ‘BASIC’ (Brazil, South Africa, India, China) countries’ leadership joined with Washington to confirm climate catastrophe at the 15th Conference of the Parties (COP) to the UNFCCC in Denmark. The Copenhagen Accord between Jacob Zuma, Barack Obama, Lula da Silva, Wen Jiabao and Manmohan Singh foiled the UN global strategy of mandatory emissions cuts, thus confirming that at least 4 degrees global warming will occur this century. The Accord is officially non-binding, and in exchange, the Green Climate Fund that Obama promised would provide $100 billion annually has simply not been forthcoming in an era of austerity.

‘They broke the UN,’ concluded Bill McKibben from the advocacy movement 350.org.[2] Copenhagen was what Naomi Klein called ‘nothing more than a grubby pact between the world’s biggest emitters: I’ll pretend that you are doing something about climate change if you pretend that I am too. Deal? Deal.’[3]