The ominous term, “competitiveness” has been bandied about as the real issue, the one that causes European countries, in particular some of those stuck in the Eurozone, to sink ever deeper into their fiasco. To fix that issue, “structural reforms,” or austerity, have been invoked regardless of how much blood might stain the streets. And a core element of these structural reforms is bringing down the cost of labor.

At the bottom of the spectrum is Bulgaria: the average private sector employee costs a company €3.70 per hour worked; in manufacturing even less, €2.90. Romania is right there at €4.50 and €3.80 respectively.

So, relocate all manufacturing plants from Sweden to Bulgaria? Or Romania? Even Greece would be a great place. The cost of labor there is only €14.70 per hour worked, about a third of what it costs up north. It’s the only country in the EU where the average cost of labor actually fell in 2012—and by 6.8%!

Based on data from the German statistical agency Destatis, this is what it looked like in 2012: 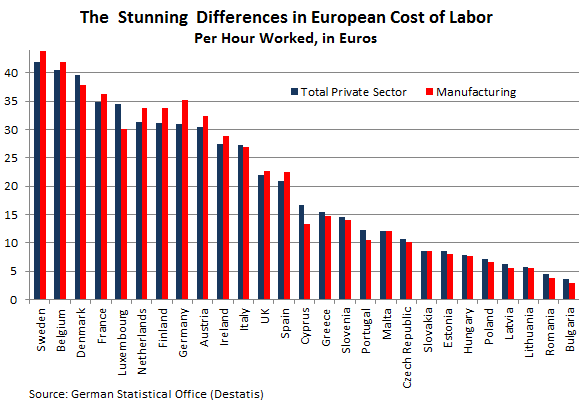 But if enough Swedish companies—and not just manufacturers but all kinds of companies—packed up their machines and robots and cubicles and headed south, unemployment would rise in Sweden. Once unemployment pushes deeply into the double digits, executives will defend their delocalization decisions by lamenting the cost of labor, and soon the government will be talking feverishly about “structural reforms,” without meaning it, and that’s where France is right now. But eventually the situation might deteriorate and pressure wages and associated costs. This has happened in Greece. And they’re all competing with the US, China, Mexico, Bangladesh…. Because competitiveness is not just a beggar-thy-neighbor system.

Alas, the rejuvenated “sick man of Europe,” Germany, isn’t surviving just by cutting its cost of labor. At €31 per hour, it was 32% higher than the EU average, though 11% lower than in France. In manufacturing, it was even more striking: Germany’s cost of labor of €35.20 per hour was 47% higher than the EU average, but still 3% lower than in France. Productivity, infrastructure, transportation costs, corruption, training and education, etc. all figure prominently into this equation. Cost of labor is not the only factor.

Much of this money was absorbed by the costs of social contributions, pensions, etc. And they can be breathtaking. The graph below shows these additional costs to the employer per €100 in gross wages paid. 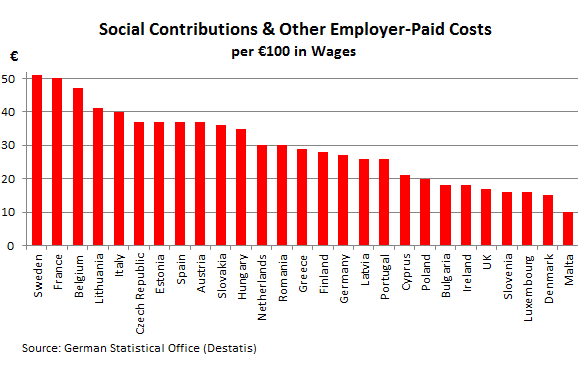 Over time, “competitiveness” hollows out the middle and lower classes in some “rich” countries—this has been happening in the US and Germany for years—balloon the middle class in other countries, and make the top in all countries immensely rich. For many people, it’s nothing to look forward to.

Italy has Beppe Grillo, but with European governments reeling from self-inflicted crises, and the euro debacle descending into a tragi-comic farce, one wonders who the real clowns are – especially here in Spain, where ministers gorge themselves on the public purse, leaving behind a trail of evidence so obvious that even the mainstream media can’t ignore it. Read…. Will the Real Clowns Please Stand Up?