Now admittedly, there are some apples and oranges problems with this chart, in that the other countries on the list have government paid medical systems or public/private systems. And Australia has a publicly-mandated private pension scheme in which employers are required to set aside 9% of wages into a “superannuation” fund (workers are encouraged to contribute as well). Of course, we do have a higher level of military spending than the other countries on the list (although if you check the World Bank rankings, some small countries have a bigger proportion of GDP in military expenditures, such as Saudi Arabia). Nevertheless, the overall picture is striking.

I’m using Wolf Richter’s version of this chart, since it’s easier to scan than the original from the Center for Tax Justice. Note that this chart captures total taxes, meaning Federal, state, and local. CTJ also points out how America has always been low tax, but has become relatively even lower taxed. In 1979, the total level of taxation in the US was 26% of GDP versus 24.8% now. That means the vaunted Reagan Revolution served mainly to shift taxation from progressive income taxes (hitting the rich harder) and corporate taxes to regressive sales taxes, rather than lower the level. But our tax level has fallen while they’ve grown in other advanced economies. Tax burdens in OECD countries excluding the US were 31.7% of GDP in 1979 and have risen to 33.4% in 2010. So the US ranking has fallen from 16 out of 24 to 32 out of 34. Any wonder why our infrastructure is crumbling and our educational attainment is falling?

Americans have been trained to resent taxes even though we are trying to run an advanced economy Walmart-style. My impression is that the citizens of many other countries are far less exercised about higher tax levels because they perceive they are getting value for money (medical services, good public transportation, etc). By contrast, we’ve had a 30 year campaign to make government incompetent by running it on the cheap and demonizing people who work in government jobs, and the result is less service and more corruption. This experiment is working just fine for those wealthy enough to be effectively stateless or to otherwise isolate themselves. And it will probably take at least a generation for the costs (such as public health problems) to afflict even them. Nicely played. 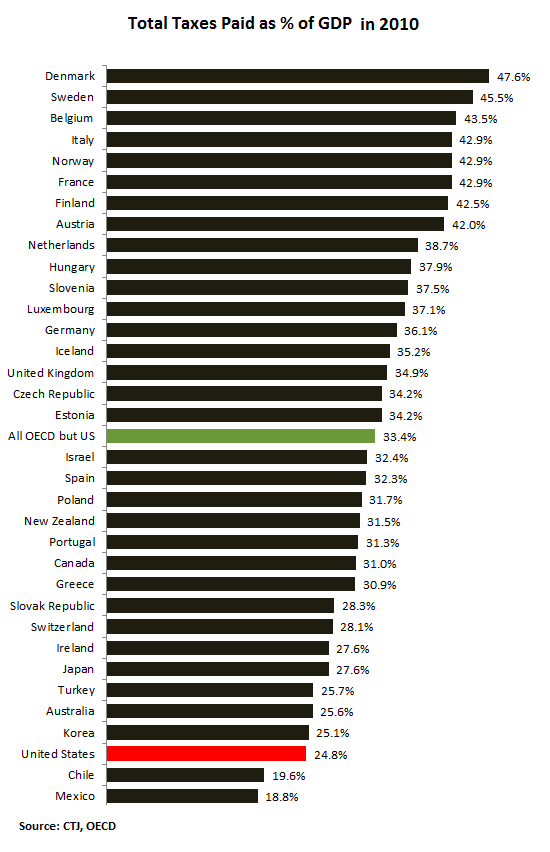