Joseph Baines’s new article, “Food Price Inflation as Redistribution: Towards a New Analysis of Corporate Power in the World Food System” is a must read if you care to understand how major corporations exercise hidden influence on our daily lives. The paper is so chock full of information and history that a summary does not do justice to its arguments, so I hope you’ll read it in full.

Surprisingly, conventional wisdom in academia is that retailers, meaning supermarkets, are the most powerful players in the food system. Baines argues that that view is out of date. While grocers gained influence from the 1960s through 1990s, which was reflected in capturing a larger share of the total profits in the food supply chain, that changed around 2000, and their profit share has fallen since then. The turn of the millennium also marks the onset of food price inflation. Baines argues that the change in dominant players and in pricing dynamics are linked, and reflect the rise of a new constellation:

My main contention is that since the late 1990s the dominant grain traders have forged close linkages with major agribusinesses. These links have given rise to a power constellation that I call the Agro-Trader nexus. The nexus’s main impact on the world food system since the early 2000s comes in the form of its facilitation and championing of the wasteful absorption of grain and oilseeds into the heavily subsidised first- generation biofuels sector. The soaring production of biofuels has contributed to a dramatic upswing in accumulation for the firms of the Agro-Trader nexus. However, the biofuels boom has been less beneficial for other firms operating in food supply chains and it has pushed millions of people into conditions of acute undernourishment.

These are the major types of players that Baines identifies in this Alien v. Predator struggle for dominance: 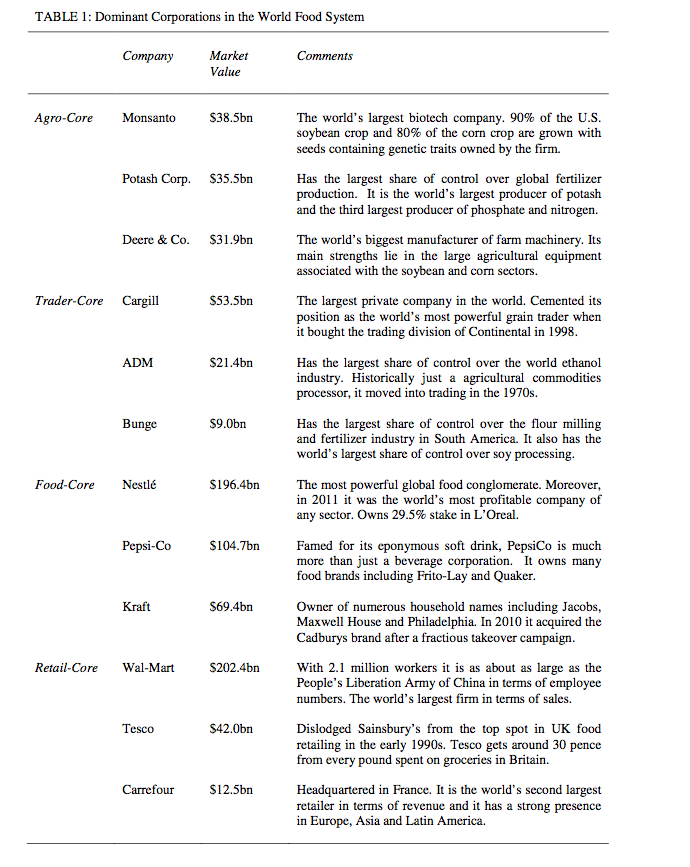 Although it is true that the dollar profit levels of the dominant food manufacturers and food retailers are far greater than those of the dominant grain traders and the major firms sell- ing agricultural inputs, the growth rate of the differential profits of the Food-Core and Retail-Core since the turn of the millennium has been comparatively modest. In short, the agribusiness firms and the grain traders are in the ascendant, not the food retailers. Thus, in order to more adequately comprehend the restructuring of corporate power over the world food system since the turn of the millennium, we must focus on the pecuniary strategies of the agribusiness firms and grain traders….It will be suggested that key firms within both clusters forged important cross-linkages with one another towards the end of the 1990s. These linkages gave rise to what I term an Agro-Trader power nexus. Rather than passively cashing in on the upswing in agricultural commodity prices, the firms within this nexus have been actively working to restructure the world food system in their favour, and in ways that make violent inflationary shifts much more likely.

The grain traders have not only increased their share of trading in grains, which are both critical dietary staples for humans as well as the most important input in livestock production, but have extended their scope of activities. Baines again:

The grain merchants’ stealthy expansion of control over food supply chains had taken them very far. At the beginning of the third agricultural commodity cycle in the early 1970s, the six largest trading houses controlled between 85 per cent and 90 per cent of US grain exports (Committee on Foreign Relations 1977: 72). However, as Figure 5 shows, the grain merchants did not just consolidate their control over trading. They also extended their power over the processing of agricultural commodities. The chart, which depicts firm concentration ratios, focuses on the flour milling, soybean crushing and wet corn milling sectors because they represent the main foci points of the modern food system. Flour, as the main ingredient for bread, has become in many cul- tures synonymous with life sustenance itself, as diverse and nutritionally rich diets across the world have been homogenised along the lines of wheat-dependency. And soybeans and corn have become key commodities because they provide the raw mate- rial for many of the industrialised inputs which have become omnipresent in modern food supply chains such as high fructose corn syrup; xanthan gum; corn starch; soy lecithin; glycine; maltodextrin; citric acid; corn oil; diglycerides; dextrose and glucose, along with animal feeds such as corn meal and soybean oil cake. By replicating the natural properties of traditional ingredients, these ‘fabricated foods’ represent a source of ‘value-added’ for corporations involved in processing. They are more durable and transportable than traditional rural products and, as many of these inputs are inter- changeable, they enhance processors’ power over mono-cropping farmers. 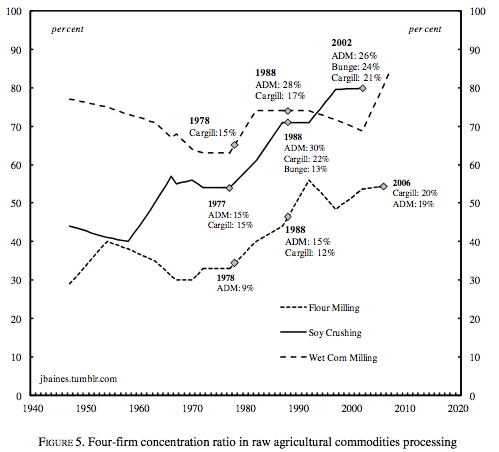 By contrast, the “Agro-Core” companies have had more of an uphill battle in their quest for dominance:

In principle, biotechnology held a lot of promise for corporations selling inputs to farmers: by patenting various bioengineered seeds, agribusiness could intensify the commodification of the agricultural process. Moreover, from the perspective of chemi- cal companies, biotechnology held the key to increasing farmer dependency on the ag- rochemicals they sold as most of the early genetically modified crops were designed for herbicide tolerance….

However, the chemical companies perhaps underestimated the degree to which they needed to convince people beyond the halls of the US government about GM plants. Some agronomists found that the yields of transgenic crops were below that of non-engineered varieties. Such findings undermined the credibility of those agribusi- nesses that boldly proclaimed that genetic modification would increase agricultural productivity. The controversy of GM food was cast into sharper relief after Monsanto first touted its planned use of ‘terminator technology’ – a modification that was to take away plants’ germinative capacity and thus guarantee the company’s proprietary rights over living organisms. NGOs such as Greenpeace and farmers’ organisations such as the one-and-a-half-million-strong Brazilian Landless Workers’ Movement protested vociferously against genetic modification in the wake of such revelations. The terminator episode was a public relations disaster for Monsanto…

As a result of these counter-currents, biotech and chemical firms had difficulty en- couraging the spread of transgenic crop production beyond the United States and a small number of other countries such as Argentina and Canada. Moreover, many gov- erning authorities within key import markets, such as the EU, Japan and Korea, fol- lowed the major food conglomerates and retailers in establishing strict import and labelling regulations…Hence, even in the heartland of agrobiotechnology, there seemed to be severe limits placed on the Agro-Core firms’ capacity to use the biotech industry for their own pecuniary ends.

The paper describes how these two sectors have combined forces through joint ventures and more important, for working together to create what Veblen called “institutional wastage,” or scarcity in the midst of potential abundance. One way has been to encourage greater production of meat, since eating higher up the food chain requires more grain. But the biggest culprit is biofuels:

It was primarily the rapid development of the first-generation biofuels sector in the 2000s that cata- lysed the inflationary shifts that have recently reverberated throughout the world food system. The Agro-Trader nexus was at the forefront of this biofuels boom. Indeed, the Renessen venture between Cargill and Monsanto sought to engineer and patent varieties of corn with high levels of starch, so that the crop can be more easily processed into ethanol (GRAIN 2007: 19) and Bunge’s and DuPont’s Solae venture has also come up with inbred and bioengineered varieties of corn and soybeans specially de- signed for the combustion engine rather than the human stomach (Milling & Baking News 2006: 20). Although ADM has not been involved in any comparable ventures with the agro-biotech giants, it has worked unremittingly to create a policy environment within which the wasteful absorption of grain in the biofuels sector can be achieved. As one Washington analyst put it:

Perhaps no commodity in American history has depended more on government support for its viability than ethanol. And perhaps no other company has done as much to orchestrate Washington’s cur- rent support for the fuel than ADM.

There’s not just a lot of solid analysis in this paper that I’ve skipped over, but also a lot of history. Again, I urge you to read this important piece in full.

Food Price Inflation and Redistribution: Toward a New Analysis of Corporate Power in the World Food System