I’ve taken off and on to writing about devolution, which is when the application of new technology winds up not producing net gains, but at best, questionable tradeoffs, and at worst, net negatives. Consider how cheap carbohydrates like high fructose corn syrup lower the cost of food but almost certainly have contributed to the increase in the incidence of diabetes.

The stealthy “technology” that has been applied across large businesses around the world is the relentless pursuit of efficiency, which too often takes the form of simple-minded cost cutting. It’s not hard to see how this can create all sorts of problems: reduced service levels or product quality leading to customer defections; reductions in investment or maintenance producing catastrophic breakdowns; concentration on a few suppliers to gain more bargaining leverage over them producing vulnerability to problems with those suppliers, whether directly (problems in their operations) or indirectly (changes in shipping, tariffing, or foreign exchange rates making them less attractive, and their size impeding an easy migration to a new source).

Readers have had a bit of schadenfreude in seeing how Walmart has gotten too clever by half and has squeezed both its workers and staffing levels so much that it is undermining critical store operations to the point where the mainstream media has taken notice. But while Walmart’s tsuris are unlikely to have broad negative social ramifications, that’s not true when drug makers become unduly fixated with their bottom lines.

Reader and MD Francois T passed along this sighting from the Denver Post, of hospitals having trouble getting critical medications. The number in scarce supply is 323, the highest level since the database was started in 2001. 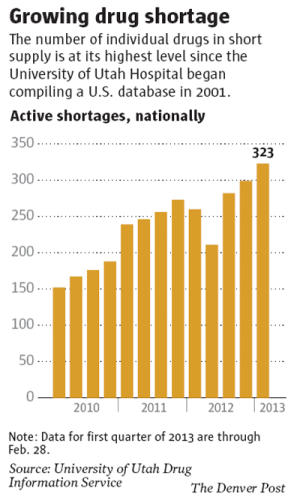 His message: “Getting closer to the edge, drug shortages are now affecting simple, everyday drugs in use in any hospital. This is going to end very badly.”

And the reason? From the article:

The current wave of problems stems from simple chemicals such as potassium or magnesium, which nevertheless need careful, sterile manufacturing procedures for hospital injections and drips. They also tend to be low-profit for the manufacturer.

Now this shortage does not appear to be critically dangerous…yet:

Hospital drug shortages nationwide have hit an all-time high, and Colorado pharmacists warn of disturbing new deficits in basics such as electrolytes, epinephrine, dextrose and other common chemicals.

Health officials do not yet call the shortages life-threatening, but do say delays and substitutions can create side effects, lengthen recoveries and hit vulnerable populations in ICUs and neonatal care…

The reason that it might seem OK to squeeze hospitals is precisely that it’s hard to point a finger at the drug companies. But notice the comment that these shortages can affect people in ICUs. It’s not hard to imagine a hospital having to ration limited supplies, say if some sort of disaster (big explosion, natural disaster) led hospitals in an area to have a flood of emergency room patients.

And the savings to the drug companies simply shifts costs onto hospitals and may well increase health care costs overall:

But on a more basic level, this is all about a disturbing trend to define corporate missions not in terms of producing terrific products or happy customers, but of placing profits first and viewing everything as secondary. John Kay, in his book Obliquity, showed that studies of companies that paired ones that sought to maximize profits versus those that had loftier aspirations showed that the ones with richer, more complex goals also performed better financially. But it is always easier to follow fads, especially since the stock market is geared toward rewarding expediencies, regardless of whether they put lives at risk.