Jefferson County has been out of the headlines for a while, but the apparent endgame of its sewer system mess is almost certain to be a harbinger for the municipal bankruptcies that are growing like kudzu over the US.

The short story of the Jefferson County mess was that it was required to build a new sewer system in the 1990s because it was oozing raw sewage into the Cahaba River. Rather than repair the leaks, the county commissioner signed a consent decree in 1996 that committed the sewer authority to an insanely high standard of performance, that of having no overflows at all (Jefferson County’s problems seem consistently to boil down to having inept negotiators on their side of the table). But not only was the resulting plant insanely expensive, but the sewer project turned into a Wall Street pillaging event as well. JP Morgan bribed country commissioners to make sure it had the lead role in the financing (it even engaged what by any pre-2000s standard would be a criminal anti-trust violation, paying Goldman $3 million to absent itself) and loaded the county up with a swap-ridden finance confection that it couldn’t begin to understand that predictably blew up.

Even with the stink-to-high-heaven corruption (20 local officials, including the mayor, were convicted), the sewer commissioners did nothing for years rather than default to get Wall Street’s attention or put the system in bankruptcy (I’ve personally suspected that they weren’t far enough from the bad behavior to stand to have their actions scrutinized in litigation). Yet even though a JP Morgan banker was recorded saying that the payment of bribes (laundered through various intermediaries) was the cost of doing business, the bank and its employees got off scot free. To give you an idea of how horrific the financial structure was, we turn the mike over to Matt Taibbi, who recaps the state of play as of late 2009:

For Jefferson County, the deal blew up in early 2008, when a dizzying array of penalties and other fine-print poison worked into the swap contracts started to kick in. The trouble began with the housing crash, which took down the insurance companies that had underwritten the county’s bonds. That rendered the county’s insurance worthless, triggering clauses in its swap contracts that required it to pay off more than $800 million of its debt in only four years, rather than 40. That, in turn, scared off private lenders, who were no longer ­interested in bidding on the county’s bonds. The banks were forced to make up the difference — a service for which they charged enormous penalties. It was as if the county had missed a payment on its credit card and woke up the next morning to find its annual percentage rate jacked up to a million percent. Between 2008 and 2009, the annual payment on Jefferson County’s debt jumped from $53 million to a whopping $636 million.

It gets worse. Remember the swap deal that Jefferson County did with JP Morgan, how the variable rates it got from the bank were supposed to match those it owed its bondholders? Well, they didn’t. Most of the payments the county was receiving from JP Morgan were based on one set of interest rates (the London Interbank Exchange Rate), while the payments it owed to its bondholders followed a different set of rates (a municipal-bond index). Jefferson County was suddenly getting far less from JP Morgan, and owing tons more to bondholders. In other words, the bank and Bill Blount made tens of millions of dollars selling deals to local politicians that were not only completely defective, but blew the entire county to smithereens.

And here’s the kicker. Last year, when Jefferson County, staggered by the weight of its penalties, was unable to make its swap payments to JP Morgan, the bank canceled the deal. That triggered one-time “termination fees” of — yes, you read this right — $647 million. That was money the county would owe no matter what happened with the rest of its debt, even if bondholders decided to forgive and forget every dime the county had borrowed. It was like the herpes simplex of loans — debt that does not go away, ever, for as long as you live. On a sewer project that was originally supposed to cost $250 million, the county now owed a total of $1.28 billion just in interest and fees on the debt. Imagine paying $250,000 a year on a car you purchased for $50,000, and that’s roughly where Jefferson County stood at the end of last year.

We’ll skip over a lot of chapters in this sorry tale. The SEC, in a rare moment of usefulness, charged JP Morgan with fraud and gets it to rescind the $647 million termination fee, pay a $25 million fine, and also pay $50 million towards the county’s displaced workers. The county tried negotiating the debt which has grown to $3.14 billion (see here for a timeline). Jefferson County finally threw in the towel and filed for bankruptcy, the biggest in the history of municipal debt, in November 2011. Keep in mind during the period of wrangling and after the filing, services are being cut. Employee workweeks are cut to 32 hours, some courtrooms are shuttered, and inpatient care and the emergency room at a hospital serving the poor is closed.

Jefferson County emerged from bankruptcy on June 4. The Wall Street Journal tells it is about to enter into another toxic financial deal. The only difference between this one and the variable rate/swaps deal that made its bad financial situation untenable is that this one is structured to strangle the county later rather than close to immediately:

The proposal for the refinancing, which has been approved by a majority of county commissioners, includes a set of bonds that schedule larger debt payments in the later years of the financing. About $474 million are a type of debt called capital-appreciation bonds. Such bonds have been derided by California’s treasurer as “terrible” for their backloaded payments, and Michigan has banned their sale by municipalities.

All told, Jefferson County taxpayers would stand to repay nearly $6.9 billion over the four-decade term of the financing, more than three times the amount the county initially plans to borrow. That is perhaps billions more than they would pay under a plan whose payments would be more evenly distributed, said a potential investor. 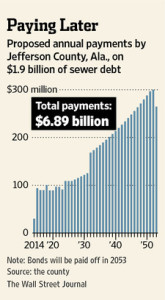 Municipal bonds sold to fund water and sewage projects often cost the issuer no more than two times the initial amount borrowed after about 30 years. At current interest rates, a home buyer with good credit can expect to pay less than double the cost of a home over the life of a 30-year mortgage.

Jefferson County plans to pay for the new debt with sewer revenues, which will come from rate increases for its sewer-system customers. Sewer bills are expected to increase about 7% annually for the first four years under the deal, according to the county’s agreement with debtholders.

Now there are some points that may not be obvious from this sorry outcome. First, if a party coming out of bankruptcy is saddled with so much debt that it can’t afford to carry it without entering into a hocus-pocus, clearly kick-th-can-down-the-road-to-see-it-blow-up-later funding structure, that’s prima facie evidence that the bankruptcy deal didn’t write down the debt far enough. But Jefferson County predictably winds up the loser any time it tangles with big city bank shysters (this time via the creditor side of the bankruptcy bar).

It also appears the county didn’t make good use of some leverage it had in the negotiations. The state attorney general weighed in with the county commissioners in November 2012 to argue that the rate increased proposed then (5.98%, lower than the 7% agreed upon) is impermissible because utilities can charge only for costs “prudently incurred” which means all the fraud-related charges should be excluded. I have a strong suspicion that this argument was either not made at all or not made very effectively in the bankruptcy talks.

The other part that the vast majority of readers probably don’t know is the sewer charges in Jefferson County are already high. The county claims it’s $38 per household. I’d love to know how they cooked the numbers to come up with that total. My 85 year old mother lives in Jefferson County. She does not water her yard or have her car washed at home. Her sewer bills are typically $50 a month. And that’s closer to the picture painted by BhamWiki of expected charges per household:

Now keep in mind: Jefferson County is generally a poor county. Its biggest employer is the University of Alabama. It has a clutch of affluent communities and income levels drop sharply outside them. Even before the planned hikes, the local TV stations have reported on families having to decide among sewer, electricity, and gas payments, since they can’t afford all three. Some have cut themselves off from the municipal water system, and are bringing in bottled water (don’t ask about personal hygiene…).

Even these increases are deemed to be inadequate. From the Journal again:

Robert Brooks, a finance professor at University of Alabama, said he found Jefferson County’s proposed refinancing deal troubling because the projected sewer revenue growth rate it assumes to pay for the bonds—which for many years is at least 3%—seems ambitious, because the sewer system has only had declining revenue in recent years.

What this means is that Jefferson County doesn’t have a real solution. It’s Greece lite. Leech the public as long as you can until the financing becomes untenable, and restructure the debt. But unlike the traditional idea of restructuring, where the borrower was to emerge with a level of indebtededness it could live with, here it’s blindingly obvious the banks and their lawyers will be back to rip more fees out down the road. It might be as late as twenty years when the rate shock hits or less than a decade if the economy does a swan dive, but Jefferson County is never going to escape the lash of its new financial lords and masters.