As I’ve been covering over the last few months the data coming out of Europe of late has been slowly getting better, and last nights’ PMI continued the trend.

The Markit Eurozone PMI Composite Output Index rose above the 50.0 no-change level in July for the first time since January 2012, according to the flash estimate. The PMI rose for the fourth successive month, up from 48.7 in June to 50.4.

Manufacturers reported the largest monthly increase in output since June 2011, registering an expansion for the first time since February of last year. Service sector activity meanwhile fell only marginally, recording the smallest decline in the current 18-month sequence and showing signs of stabilising after the marked rates of decline seen earlier in the year.

New orders fell only marginally during the month, registering the smallest decline since August 2011. The rate of loss of new orders has now eased for four straight months, helping the rate of decline in backlogs of work ease to the slowest for nearly two years in July.

New orders for manufactured goods rose for the first time since May 2011, buoyed by a slight increase in new export orders. Incoming new business in the service sector meanwhile continued to decline, although the drop was the smallest seen since March of last year.

The easing in the rate of loss of new business was a factor helping drive expectations for service sector business growth in the year ahead to the highest since April.

….
By country, output rose at the fastest rate for five months in Germany. Service sector growth hit a five-month high while manufacturers reported the steepest monthly increase in output since February of last year. Overall job creation hit the highest since March.

In France, the rate of decline eased to the slowest seen since output began falling in March 2012. This was buoyed by a return to growth in manufacturing, which reported the largest rise in production for 17 months. The service sector meanwhile saw the smallest downturn in activity for 11 months. Employment fell across both sectors, though to the weakest extent since April 2012. 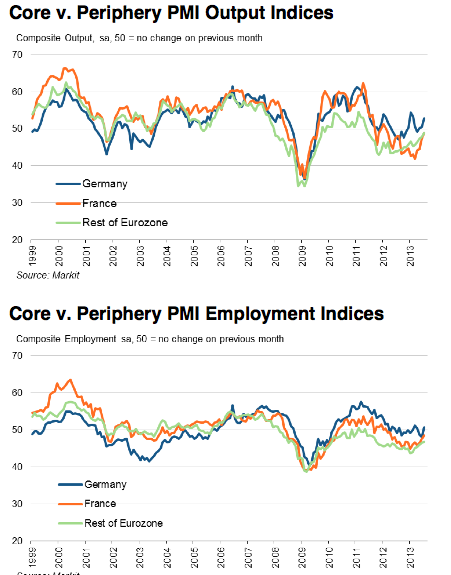 So, again, some goods news , but let’s not get ahead of ourselves here. If you’ve been reading along for any length of time you will know much of this new found competitiveness in many European nations is because they have squashed down internal demand making themselves more competitive by lowering wages and standards of living, which has included large increases in unemployment. One of the key issues I have talked about since I started covering the Eurozone is that this particular strategy is mutually exclusive with the idea that existing debts, serviced by pre-existing higher wages, were ever going to be paid back.

Obviously, much of the economic and political elite in Europe weren’t too keen to address this particular issue as it would have required banking systems across the region to realise actual losses on their balance-sheets, something that is on-going. So instead the Eurozone went on a campaign of “extend and pretend” in hope that somehow, at some time in the future, the economy would pickup and all would be well again. Of course, the fiscal policies of the zone have made this particular issue even harder to address so, as the economic slump has continued, the ability for debts to be serviced has worsened and now, in many cases pushed onto sovereign balance-sheets, debt to economic output ratios have reached alarming levels.

Due to the involvement of EU governments in financial assistance to certain Member States, and in order to obtain a more complete picture of the evolution of government debt, quarterly data on intergovernmental lending (IGL) is also published. The share of IGL in GDP at the end of the first quarter of 2013 amounted to 2.1% for the euro area and to 1.6% for the EU27 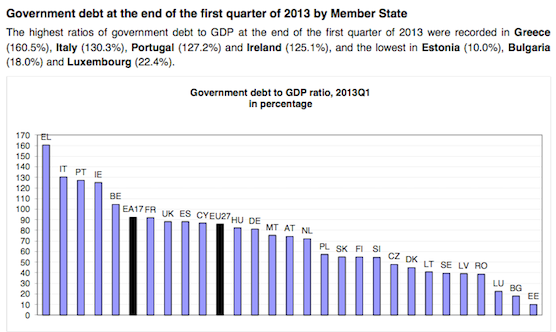 So as you can see , much of the Eurozone periphery continues to be encumbered by unsustainable levels of government sector debt which continues to grow as GDP shrinks. On top of this private sector wealth continues to fall in many nations as the economic slump drives down asset values. The latest house prices from the Netherlands for example.

This latest PMI data does show a broad upturn in economic activity, or at least a slowing of the decline, but as I have discussed previously what is actually required, in the absence of much greater external demand, is larger growth in the periphery while the euro-using creditor nations become greater consumer of goods produced in these regions. The on-going strength of Germany, although good for the Germans, is not good news for the rest of the zone in this regard, and you only have to look at Italy’s situation to realise there are many more hurdles to be overcome before you can call this crisis over:

Italy is heading for an even more severe economic downturn than previously forecast, and will contract by 1.9 percent this year, the country’s central bank said on Wednesday.

In its July bulletin, the Bank of Italy downgraded its 2013 outlook for the country, forecasting a contraction of 1.9 percent, after projecting a 1 percent slump in January. The Italian economy shrunk by 2.4 percent in 2012.

The bank attributed its downgrade to weaker-than-expected economic activity in the first half of the year, following a slowdown in international trade and continued tensions in the credit market.

The move follows a downgrade from credit ratings agency Standard & Poor’s, which earlier this month cut its rating on Italy’s sovereign debt to BBB from BBB-plus, two notches above junk status.