Yves here. This post is a workmanlike compilation of trends in the driving habits of Americans. Some of the data shows that use of public transportation has been rising faster than population growth…yet budget stresses mean those services are regularly targeted for fare increases and schedule cutbacks.

Having never owned a car, and hoping to remain in that category, I wish I saw a more concerted push towards
rethinking zoning and development to encourage more density and thus more walking (which gives you a twofer: more active citizens and less gas usage). Perhaps readers will point out some examples, but it seems that this sort of change has been relegated to the category of “environmentalist dreaming” rather than a goal to be taken seriously.

By Matt Smith, an analyst who blogs at Energy Burrito. Cross posted from OilPrice

There have been a number of recent research reports addressing the notion of ‘Peak Car’ – whether driving has peaked per person in the US. So here are a bunch of interesting tidbits and nuggets I have gleaned from the reports ‘A New Direction‘ and ‘Has Motorization in the US Peaked?’, as well as an update on miles driven….it’s all downhill from here.

Pedal to the Metal 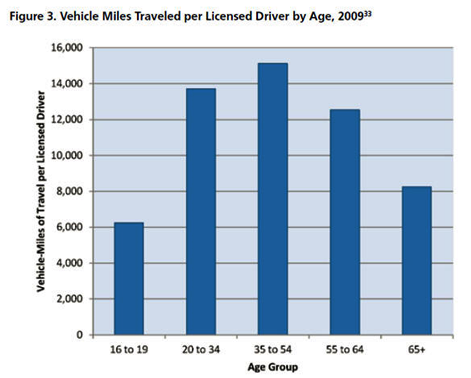 –The absolute number of cars peaked in 2008, at 236.4 million
–This translates to nearly 2 vehicles per household, over 1 car per licensed driver, and 0.75 vehicles per person 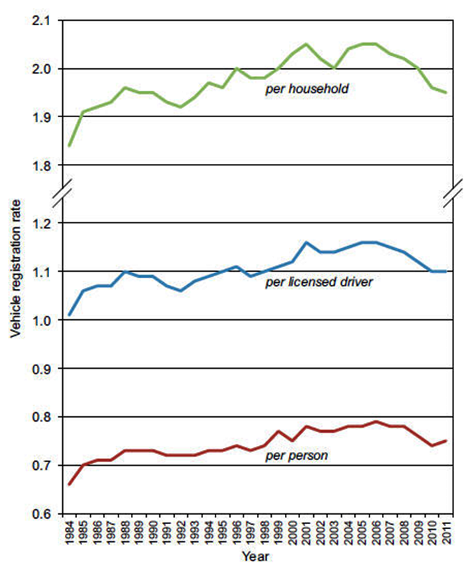 Although ‘The Great Recession‘ is likely to blame for the drop-off in vehicles since 2008, a growing population (increasing 11% from 2011 to 2025) means we will likely see a higher number of vehicles on the road in the future.

Whether this slow-down is due to telecommuting, changing demographics, higher fuel costs, online shopping, or increased use of public transport, the evidence points to a turning tide in terms of miles driven: 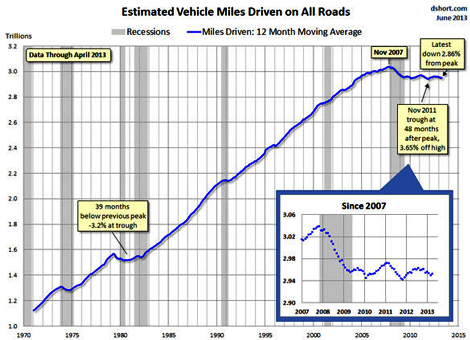 Thanks for playing, and keep on trucking…or don’t, as the case may be…