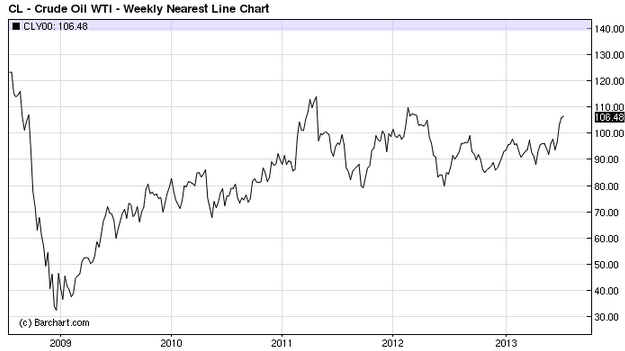 With the Aussie stuck in the low 90 cent range for now, that has pushed AUD oil to a new high as well around $117.60: 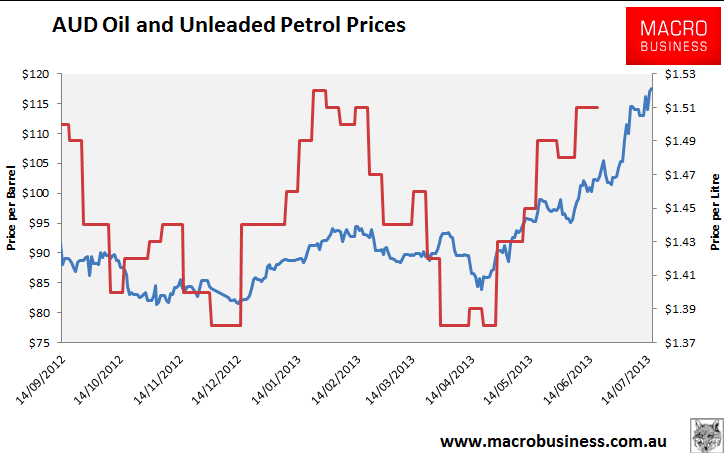 As you can see, local petrol prices are yet to punch above February prices but going they’re to, probably next week. The upside to come is somewhere between 5-10%.

I’ve argued that this is unlikely to continue. Global growth does not justify prices at this level. As I’ve argued before, as an inelastic supply market, global oil prices are set largely on perceptions of spare capacity:

As the graph shows, that invasion marked two vital turning points in the oil market. The first was that OPEC’s spare capacity became severely constrained on geo-political concerns and, second, it was the last time that the world saw oil priced in the $20 range, in my view, for good. From 2003 to mid 2006, OPEC’s spare capacity oscillated in a band between one and three million barrels per day and the oil price more than doubled from $30 to $80. For the following year, spare capcaity rose to four million barrels and the oil price corrected to $60.Then, as the last growth cycle wound itself toward its blow off phase, and spare capacity dropped toward 2 million barrels again, the price skyrocketed.

According to the IEA, spare capacity currently sits at 4.38 m/bl per day so there is no fundamental reason for rising prices.

But geopolitical risk is another factor in play. And adding to concerns of over Egypt there are increasingly unstable signs around Syria. Israel is already engaged in surgical bombing strikes on Hezbollah supply lines and the US is considering similar intervention. From AP:

The situation in Syria, where a civil war has killed almost 93,000 people, figured prominently at Thursday’s hearing amid an increasing clamor among Assad’s opposition for active U.S. involvement.

Senators including Levin and McCain have pressed Obama to take a more forceful approach to defeat Assad’s forces. While the administration has authorized lethal aid to rebel forces, it isn’t trying to enforce a no-fly zone in which Syria’s combat aircraft would be barred from flying, or otherwise intervene militarily.

“Senator, I am in favor of building a moderate opposition and supporting it,” Dempsey told McCain. “The question whether to support it with direct kinetic strikes … is a decision for our elected officials, not for the senior military leader of the nation.”

The use of kinetic strikes, a military term that typically refers to missiles and bombs, “is under deliberation inside of our agencies of government,” Dempsey said.

Asked about Dempsey’s comments, White House spokesman Jay Carney said Obama always asks his military commanders for options “and that is true in an arena like Syria.” He said the president is constantly reviewing U.S. options in Syria.

“There are a whole range of options that are out there,” Navy Adm. James Winnefeld, vice chairman of the Joint Chiefs, said of the planning for military action in Syria. “We are ready to act if we’re called on to act.”

Dempsey acknowledged in response to a question from Sen. Lindsey Graham, R-S.C., that Assad’s forces have the upper hand.

“Currently the tide seems to have shifted in his favor,” the general said.

It think it unlikely that the US will intervene. A Syrian democracy more tolerant of Israel would certainly contain Hezbollah and dent Iran’s influence but the risks are high. With its explosive borders, Syria is a far complex problem than isolated Libya. Air strikes or a no-fly zone aimed at regime change would pose risks to the Syrian people, serious people movement risks into neighbouring states as well as complicate US relationships in the region. There’s little humanitarian rational therefore and so long as the Syrian authorities don’t use WMD, there’s no proliferation argument either.

Syria has no oil but the instability is enough to give oil speculators the upper hand for now. I maintain that oil is more likely to fall than stay high once this pulse exhausts itself.