We’ve been warning that the sudden rise in mortgage rates was going to create a great deal of buyer sticker shock. It’s already virtually halted refis.

Even though the increase is arguably from a low base, homebuyers tend to max out on their purchasing power. And we’ve also given reports from brokers that the rise in costs is even larger than the apparent rise in interest rates for important categories of purchasers, since the FHA stopped waving points. 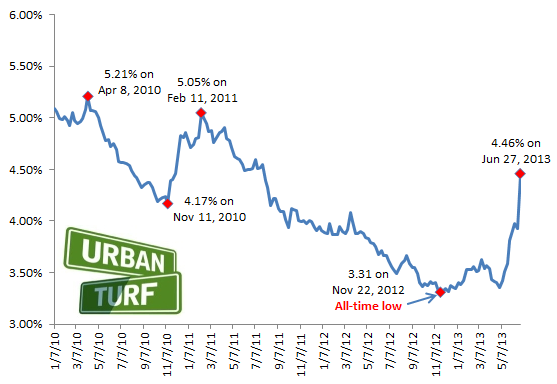 UrbanTurf polled prospective homebuyers to see if the jump in rates had resulted in a delay in their housing search.

Mind you, while 30 year fixed rates (per Bloomberg) have backed a bit off their last Friday recent peak, at 4.54% they are still above the level cited in the Urban Turf poll.

Admittedly, there may be sample bias. An online poll would presumably skew a bit younger than the market as a whole. But Urban Turf is a DC based blog, and Washington has been a particularly strong market, so the fear of renters being priced out (it’s a worry of at least one correspondent there) would be a lot stronger driver of behavior than, say, in cities that might also seen good price appreciation in the purchase market but were seeing softening in the rental market due to conversion of foreclosed homes to investor properties. So my guess would be that net net this sample would not be unrepresentative and if anything would be biased towards not being as deterred by rate rise as a truly national sample.

So this sort of report will also indirectly serve as a test of the Fed’s motivation for talking up the taper. If it really wanted just to take some air out of the nascent housing bubble, it’s probably already overshot, although it will take a while to see that in the data. But if it’s motivations are political, in that the central bank is sick of the heat it is taking for QE, or thinks the banks need a more positively sloped yield curve, or just thinks QE may not be such a hot idea after all and it would be getting out as soon as it conceivably can, then even this sort of early warning won’t alter its path. We’ll find out either way soon enough.