Yves here. As much as I am a fan of having state supported higher education, the “making Wall Street pay for it” will backfire if not framed properly. The author, Les Leopold, advocates a transaction tax as the way to pay for increased support for schools.

The shortcoming here is that transaction taxes are NOT designed to be revenue-generators (although they do produce tax receipts). They are meant to reduce the activity that it taxed. And there is no question we need to shrink our bloated financial sector. Many economists, such as Simon Johnson in his 2009 article in the Atlantic, The Quiet Coup, pointed out how the banking sector had become disproportionately large relative to the size of the economy since the early 1980s. Brad DeLong describes how more and more economists are coming around to the point of view that a lot of financial sector is purely extractive:

Over the past year and a half, in the wake of Thomas Philippon and Ariel Resheff’s estimate that 2% of U.S. GDP was wasted in the pointless hypertrophy of the financial sector, evidence that our modern financial system is less a device for efficiently sharing risk and more a device for separating rich people from their money–a Las Vegas without the glitz–has mounted. Bruce Bartlett points to Greenwood and Scharfstein, to Cechetti and Kharoubi’s suggestion that financial deepening is only useful in early stages of economic development, to Orhangazi’s evidence on a negative correlation between financial deepening and real investment, and to Lord Adair Turner’s doubts that the flowering of sophisticated finance over the past generation has aided either growth or stability.

Four years ago I was largely frozen with respect to financial sophistication. It seemed to me then that 2008-9 had demonstrated that our modern sophisticated financial systems had created enormous macroeconomic risks, but it also seemed to me then that in a world short of risk-bearing capacity with an outsized equity premium virtually anything that induced people to commit their money to long-term risky investments by creating either the reality or the illusion that finance could, in John Maynard Keynes’s words, “defeat the dark forces of time and ignorance which envelop our future”. Most reforms that would guard against the first would also limit the ability of finance to persuade people that it performed the second, and hence further lower the supply of finance willing to take and bear risks.

But the events and economic research of the past years have demonstrated three things. First, modern finance is simply too powerful in its lobbying before legislatures and regulators for it to be possible to restrain its ability to create systemic macroeconomic risk while preserving its ability to entice customers with promises of safe, sophisticated money management. Second, the growth-financial deepening correlations on which I relied do indeed vanish when countries move beyond simple possession of a banking system, EFT, and a bond market into more sophisticated financial instruments. And, third, the social returns to the U.S.’s and the North Atlantic’s investment in finance as the industry of the future over the past generation has, largely, crapped out. A back-of-the-envelope calculation I did in 2007 suggested that in mergers and acquisitions the world paid finance roughly $800 billion/year for about $170 billion/year of real economic value–a rather low benefit-cost ratio–and that appears to be not the exception but the rule.

I should, before, have read a little further in Keynes, to “when the capital development of a country becomes a by-product of the activities of a casino, the job is likely to be ill-done”. And it is time for creative and original thinking–to construct other channels and canals by which funding can reach business and bypass modern finance with its large negative alpha.

So I’d suggest that the two agendas in Les Leopold’s piece be a little less tightly linked: we should institute transaction taxes to redirect capital away from speculation to productive activity. And we should also have more public support for higher education, since many students will simply forgo college if the price is becoming a debt slave. The system we have in place is bad for everyone involved except for the administrators at colleges and the people directly involved in the student debt business. Whatever revenues transaction taxes raise can help fund public education. But we should not look to them as a sole source

By Les Leopold, whose latest book is How to Make a Million Dollars an Hour: Why Hedge Funds are Siphoning away America’s Wealth. Cross posted from Alternet

Anyone with a heartbeat knows that Wall Street took down the economy, killed millions of jobs and hasn’t had to pay a penny for the damage it caused. In fact we are paying them for crashing the economy in the form of trillions in bailouts and low interest loans.

Well, maybe it’s time for Wall Street to contribute, rather than siphoning off our wealth. How about a sales tax on all transfers of stocks, bonds, and derivatives in order to fund tuition-free higher education?

Why are high schools free but colleges aren’t?

Access to higher education is vital to our economy and to our democracy. Today a college degree or post-high school professional training are the equivalent to what a high school diploma provided and signified a generation ago. For over 150 years, our nation has recognized that tuition-free primary and secondary schools were absolutely vital to the growth and functioning of our commonwealth.

By the middle of the 19th century, New York City also provided free higher education through what would become the City College of New York. Hunter and Brooklyn colleges also were tuition-free, as was California’s rapidly growing post-WWII state college and university system. The GI Bill of Rights after WWII provided significant resources to over three million returning veterans to go to school tuition-free, which in no small part, helped to build American prosperity for the next generation. (Tuition was even provided if GIs attended private colleges and universities.) A further impetus to free higher education came as America fell behind the USSR during the Sputnik-era space race.

But the spread of free higher education stalled and then retreated precisely as Wall Street began to grab more and more of the nation’s wealth. As financialization transformed the economy starting in the late 1970s, average wages flattened while Wall Street incomes shot through the roof. At the same time taxes on the super-rich collapsed placing more and more of the burden on working people. Lo and behold, free higher education rapidly became “unaffordable.” Wall Street then swooped in with loans as students and their families loaded up on debt in order to gain access to higher education. This is the very definition of financialization. 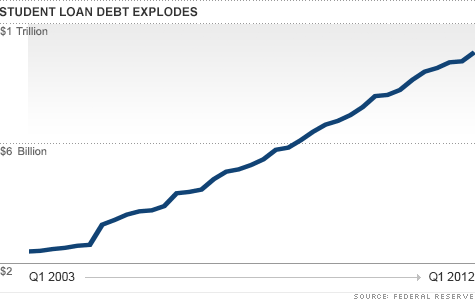 As Student Loans Rise, the Rich get Richer

As student loan debt climbed ever higher, the super-rich continued to rake in more and more income, especially in comparison to the rest of us.

Many financial elites rose to riches by packaging and selling every kind of toxic asset imaginable. They made fabulous amounts as they pumped up the housing bubble, and then made even more as it imploded. It turns out that wealth was based on hot air, as well as plain old cheating. (See How to Make a Million Dollars an Hour [3] for a detailed account.) So far, neither Wall Street nor its super-rich patrons have been forced to pay for the damage they caused. 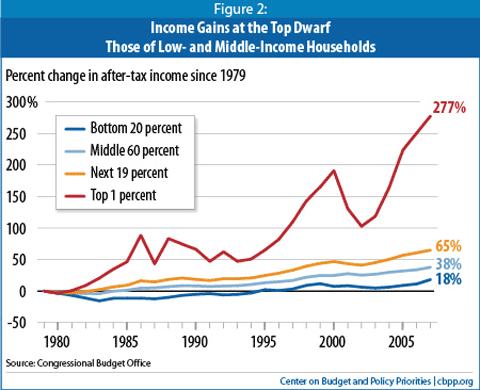 How to Make Wall Street Pay

It’s not easy to tax the super-rich when they have their hooks so deeply into both political parties. However, the student debt crisis opens the door to force a provocative public debate:

The financial transaction tax (aka Robin Hood Tax or Speculation Tax) hits hard at Wall Street gambling. A small sales tax on all financial transactions will come almost entirely from those who are gaming the system by rapidly moving money in and out of markets. Eleven European nations are about to institute such a tax and have found excellent ways to enforce it. (If you or affiliates don’t pay by using shell companies and other tricks, you don’t do business in our country.) England has had one on stocks for the past 300 years and it works just fine. Clearly, a sales tax would successfully collect from the superrich.

Of course, you’ll hear Wall Street apologist moan and grown about how such a tax will kill jobs, steal from your pension funds, and rob your kids’ piggy-banks. All lies.

Unless you play with your 401k like a high frequency trader—which means you’ll be fleeced by them anyway—you won’t feel this tax. Neither will your pension funds, which are not supposed to churn your investments anyway.

As for jobs, when was that last time Wall Street produced real jobs on Main Street? They would just as soon finance a job smashing merger or the movement of jobs out of the country. The only jobs that would be hurt are a few at high frequency hedge funds that milk markets by making millions of automated trades per second. For the sake of financial stability and fairness, they should be put out of business anyway.

No, when it comes to hitting Wall Street elites, a financial transaction tax is just about perfect.

Let’s encourage Elizabeth Warren to take the next step

Senator Elizabeth Warren opened the door to this debate as she attempted to stop student loan interest rates doubling to 6.8 percent in July. On July 1, they doubled [4]. She wants the Federal Reserve to loan money to students at the same rate it charges too-big-to-fail banks, which is next to nothing at 0.75 percent.

Of course, most politicians and pundits think she’s off her rocker. How dare she try to interfere with “market forces”? But as Ellen Brown of the Public Banking Institute shows in her excellent rejoinder (“Elizabeth Warren’s QE for Students: Populist Demagoguery or Economic Breakthrough? [5]“), it makes economic as well as ethical sense to invest in our young people. In fact, it makes a whole lot more sense than propping up too-big-to fail banks that have grown even fatter since the crash.

But why have any student loans at all?

Why accept the perverse idea that students should saddle themselves with decades of loan repayments in order to gain access to higher education? Even with interest rates at 0%, we’re still asking students and their families to load themselves up with tons of debts in order to get access to the advanced skills and knowledge our economy and our democracy desperately need.

Isn’t it in the national interest to invest in our young people, rather than loading them up with debt?

Can we really beat the Street?

Maybe. It starts with having the nerve to ask for what we really want, rather than compromising before we start. Do we think Wall should pay reparations for what it has done to the economy? Do we think it fair to use that money to fund free higher education in order to rid our young people of crushing debt? If the answers are yes, we can start organizing.

The next step is to convince those working on the Robin Hood Tax to tie it to free higher education. That would allow financial transaction tax advocates to reach out to an enormous constituency—students and their families.

And yes, we also we need some admitted lying to Congressorganizational magic, not unlike what sparked Occupy Wall Street. Perhaps, websites like AlterNet.org can link up with like-minded media outlets and progressive groups to form a vast coalition of the pissed-off! Millions might be ready for that.

The anger toward Wall Street is there. The outrage over ever-rising student debt is there. Now is the time to connect the two and provide some extra organizational juice.

No one has a magic bullet and no one can guarantee success. But unless we try, we will guarantee that Wall Street and its Washington minions will continue to rip us off.

Surely we have enough creative energy to build another path.