The financial crisis was brutal for Germany, but the recovery was steep, and in 2011, the gloating started. They called it the German “success recipe,” a system that was somehow superior to any other. It would keep the economy growing even as Eurozone mayhem was breaking out all around. That optimism has endured, and stocks have hit new highs in May, but the German economy has diverged sharply from that scenario.

A key element in that “success recipe”- much to the chagrin of Germany’s beleaguered neighbors – is the relentless drive to export. The whole political and economic machine is geared that way. Foreign policy decisions are made on that basis. As are domestic policy decisions. In return, the economy has become dependent on exports and outsized trade surpluses.

But exports tumbled 4.8% in May from a year earlier, to €88.2 billion, the worst month so far this year. For the first five months of 2013, exports were below the same period last year. Exports to non-euro EU countries, such as the UK, dropped 2.4%. Exports to Eurozone countries – in a magnificent display of the fiasco that the euro has become – plummeted 9.6%.

For the month, the Eurozone bought 36.6% of Germany’s exports and the non-euro area 20.0%. While periphery countries have been struggling for years, with demand collapsing in some, it’s France that Germany is most worried about. It buys about 10% of Germany’s exports, more than any other country, but it’s slithering deeper into a full-blown economic crisis with unemployment at record highs, with the auto industry – a key export sector for Germany – in a death spiral, and with consumer demand flagging. Even exports to the rest of the world skidded 1.6%. It was the worse May decline since 2009.

Alas, 2009 brings up peculiar memories. In the first quarter that year, GDP plunged 4.1% from the fourth quarter of 2008, when it had already plunged 2.0% from the third quarter. Annualized, those two quarters added up to a double-digit swoon in GDP, the worst in the history of the Federal Republic. German exports had come to a halt.

Turns out, the economy was saved not by the sweat of German workers or the ingenuity of their managers or the German “success recipe,” or whatever, but by the drunken stimulus and money-printing frenzy in the US, China, the EU, and eventually other countries, and German companies sucked with all their might on a wide variety of programs worldwide, ranging from green-energy boondoggles to cash-for-clunkers debacles.

That binge is coming to an end. The Fed is threatening to pencil the word “taper” on the calendar for September. In Congress, “stimulus” has been replaced by “sequester.” China is cracking down on overcapacity, capital misallocation, and a financial system gone haywire. And the Eurozone is mired in a deep recession. So the German economy is responding. After the fourth quarter drop of 0.7%, GDP edged up only 0.1% in the first quarter, but was down 1.4% from a year earlier. What that “success recipe” looks like: 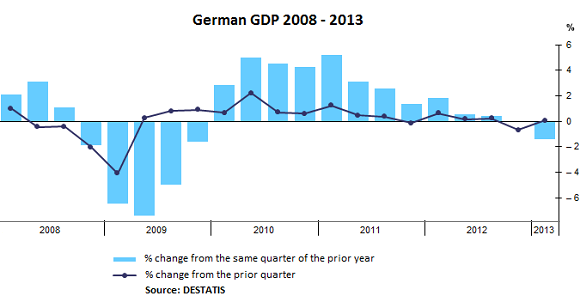 The world has staked its hopes on Germany, the powerful locomotive that would pull the Eurozone out of its funk. Yet imports, precisely what is needed to do the pulling, fell 2.6% in May, compared to May 2012, on declining demand even in Germany.

Any glimmer of hope for June? Not very bright. A harbinger of future business, namely new orders, dropped 1.3% in May from April, after having dropped 2.2% the month before. Domestic orders dropped 2.0%, export orders 0.7%, with orders for consumer goods down 3.1%. For the April-May period, orders fell 1.2% from prior year, with domestic orders down 3.7%. The world’s dream of the German locomotive has popped.

Yet, despite such nagging details, the 7,000 or so business executives who participated in the Ifo survey in June were gung-ho about the economy, pushing the Business Climate index up to 105.9 and the Present Situation index to 109.4. While below the euphoria level of 115 in early 2011, it’s enough for Ifo to claim that companies were “increasingly optimistic with regard to their future business outlook.” Manufacturers were “clearly more optimistic about future business developments. Export expectations in particular have increased sharply.” That was two weeks ago.

The reaction to today’s export debacle? German stock jumped on the news, or on some other news, or on no news, with the DAX closing at 7,969, up 2.1%, but still off its all-time la-la-land high of 8,558 achieved in May – more evidence of the absolute separation of the financial markets from economic reality, which will go down in history as the greatest accomplishment that central banks around the world have ever achieved.

So Chancellor Merkel is likely to hang on to her job following the September elections unless a major debacle blows up. Therefore, no debacles will be allowed to occur until after the election, not even the economy. But just then, new revelations about NSA spying blew up and landed in Merkel’s lap. Read…. ‘Total Surveillance’ Officially Brushed Off In Germany.