Anyone remember this act of civic vandalism? 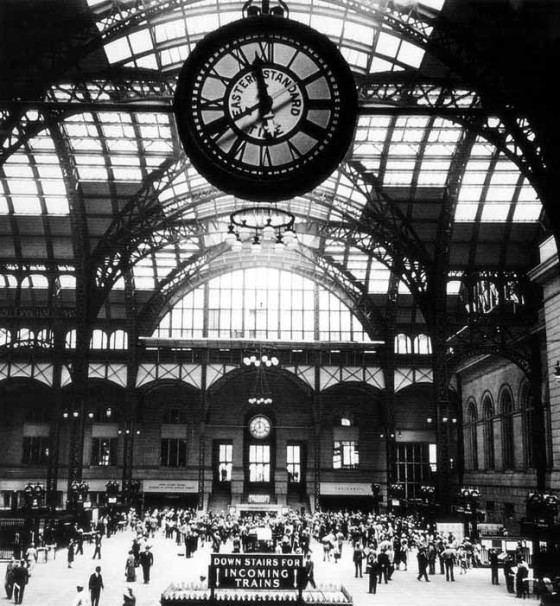 Yes, that’s Penn Station, demolished 50 years ago so real estate moguls could make a packet while at the same time creating the globe’s most appalling transport hub.

Or this act of civic vandalism? 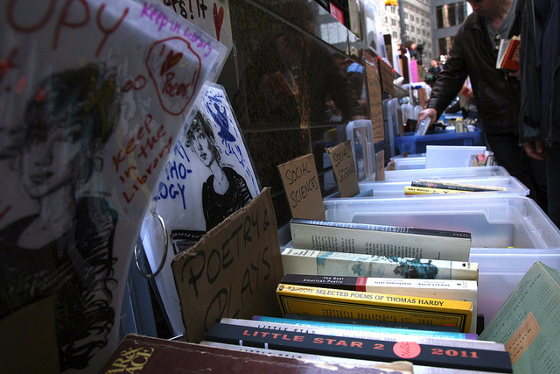 Yes, that’s the People’s Library in Zucotti Park, bulldozed by Mayor-for-Life “Mike” Bloomberg, because gawd knows we can’t be using public space to experiment with open forms of decision making because who knows where that might lead?*

Well, in a scheme that equals wrecking Penn Station for greed, and wrecking the People’s Library for ignorance and brutality, New York City’s Powers That Be are taking dead aim at the New York Public Library. (Let me immediately caveat that I can’t guide anybody through the intricacies of making real estate sausage, so I’ll present a very simplified 30,000 foot view, which I hope readers, especially Manhattanite readers, will correct. Also, in a total spoiler, I’m less interested in the nefarious dealings of the our elites — and they are as nefarious as those described in the pre-revolutionary Les Liasons Dangereuses — than in the acts of civic engagement that bring those dealings to light and (hopefully) check or even reverse them.)

Letitia James in the Brooklyn Daily Eagle sets the scene:

The usage of New York City’s libraries is way up: 40 percent programmatically, nearly 60 percent in terms of circulation. The public demand for physical books is up too. More people visited public libraries in New York than every major sports team and every major cultural institution combined. Why then are we selling city libraries and shrinking the library system?

Why? Two words: “Real estate.” (And one word: Greed.) The board of the New York Public Libary (NYPL) voted for a Booz Allen deliverable called the Central Library Plan (CPL). (The Nation has a fine exposé of the secretive, anti-democratic process by which the CPL was put in place.) Here’s what the CPL was (was) going to do to the main NYPL building on 42nd Street, the one with the lions (“Patience” and “Fortitude”) that surely you must have been to. Wall Street Journal, August 23:

The planned renovation of the Stephen A. Schwarzman Building [the main branch of the NYPL] would remove seven levels of book stacks that until March held millions of volumes from the research collection. In their place, the library plans to construct a new circulating library, replacing the Mid-Manhattan Library as well as the Science, Industry and Business Library.

Library officials have said their plan would solve a number of problems for the institution by replacing a deteriorating branch library, creating safer storage space for books and generating more revenue for staff and book acquisitions.

You don’t (librarians correct me) check books out from a research liibrary; they’re valuable, or one-of-a-kind, and need to be available for scholarly use in near-real time; they’re brought up from “the stacks” on demand, and returned at the end of the day (or placed on reserve). An especially nutty feature of the CPL was that it planned to house millions of books in the NYPL’s research library in New Jersey (hopefully not in a landfill), which defeats the whole purpose of a research library. A circulating library, by contrast, allows people to take books home, like books to read to the kids. Crucially, however, both research and circulating libraries are there to serve the public.**

1. Stacks out and books to New Jersey

2. Mid-Manhattan Library and Science and Science, Industry and Business Library go where the stacks were

From the testimony of professional researcher John Christenson at the New York State Assembly, June 27, 2013; there’s a fun shredding of “Sir” Norman Foster’s nutty concept of an atrium where the rich folks can hold parties, but let’s cut to the meat:

As everyone in this room knows, this whole current plan is really a real estate story, apparently designed to make someone really, really rich while impoverishing the cultural and intellectual texture of the city of New York. …

The successful and ideal profile of the existing Mid-Manhattan building as fulfilling the goals of being a visible, accessible, democratically welcoming center located right on the street compared to the hidden, inaccessible, elitist nature of the proposed plan to move within the Main Building butts up against the reality of the real estate of the Mid-Manhattan building. This prime property is ripe for development. But who would get it? Who is poised to make the big money with its ownership? But more importantly, why should the library give it up since, obviously, they could never be able to recapture such real estate if the nature of libraries changes again at some time in the future. Plus, considering the library’s past failures in successfully getting good prices for the real estate they have already sold, why should they be trusted not to throw this one away as well?

You will see on this map that the building directly adjacent to the Mid-Manhattan building to the east is one of those shaded buildings [targeted for replacement] – 10 East 40th Street. …

10 East 40th Street is owned by a group headed by real estate mogul Larry A. Wohl. Obviously, today if 10 East 40th could be a target for demolition and replacement with a super skyscraper, then a new building that could occupy both 10 East 40th and the Mid-Manhattan building site would make that super skyscraper even more super. I doubt that that observation has escaped Larry Wohl. And he has the money to do it. In addition, Mayor Bloomberg has apparently jumped on the “tear down the Mid-Manhattan building” bandwagon.

(Readers more familiar with the story, do correct me.)

And this wouldn’t be the first time the NYPL has sold of its properties to benefit real estate developers to the detriment both of the public and its own putatively public mission. From Susan Bernofksy, who attended the hearing at which Christenson testified:

The ghost of the Donnell Library hung over the day’s proceedings, a grim specter. This popular five-story library at 20 West 53rd Street – just north of Rockefeller Center, whose architecture it was designed to compliment – was closed in 2008 and sold to a real estate developer that at first planned to put in a hotel but instead, after the financial crisis struck, sold it to a second developer that is in the process of constructing a high-rise condo tower on the property. Part of the deal was that any new development would incorporate a new library into its design. Indeed, a new Donnell library is scheduled to reopen in summer 2014, and it’s going to be located – wait for it – in the basement. The new developers have allocated 28,000 square feet for the library (less than a third the size of the old library – 97,000 sq. ft.) and almost all of this will be distributed among the two basement floors of the building, with only an entryway on ground level So, you’re thinking, clearly this enormous sacrifice of a beloved neighborhood library building must have netted the library system some big bucks, right? Guess again. As came out in yesterday’s hearing, the sale of Donnell brought in a paltry (in real estate terms) $39 million. The penthouse apartment in the new building just sold for more than that.

Mission accomplished! Public good down, private wealth up! Relax, because everything’s going according to plan!

As it turns out, the worst feature of the CPL — the demolition of the stacks — has been ameliorated. Wall Street Journal, August 27:

The New York Public Library, responding to outcry over its plans to demolish century-old book stacks, will this fall unveil a new design that preserves a significant portion of them, its president, Anthony Marx, said Tuesday.

The library disclosed its plans in response to questions from The Wall Street Journal about alternatives it had considered to the $300 million renovation, which has sparked two lawsuits brought by scholars and preservationists, including a Pulitzer Prize-winning historian, aiming to block the stacks’ destruction.

The library still intends to build a new circulating library in the 80,000-square-foot space under the Rose Main Reading Room. But in contrast to renderings released in December, which envisioned a vast atrium, the new design will incorporate the stacks as “a prominent feature,” Mr. Marx said. They would hold the circulating library’s books and be configured in a way that allows patrons to “see and experience” what the stacks were like as originally conceived by the building’s architects, Carrère and Hastings, he said.

Nevertheles, “significant portion” sounds like weasel words to me. And the public purpose of a research library is to serve as a research library, not some sort of tourist trap, or a petting zoo for bibliophiles. You will also notice that the focus on the architecture diverts attention from the real estate deal, with is still in play.

So, since the real fight here is for public purpose, as opposed to the civic vandalism of rentiers, I’ll close with some words from those fighting the fight:

Last Sunday I went to a meeting about what’s in store for the Brooklyn Heights branch. My own favorite lending library, the Donnell on 53rd Street, closed in 2008 to be demolished by a developer who promised to include a library in the new high-rise — a promise as yet unfulfilled. The meeting was crowded with mostly older people hearing the same kind of talk about their library and smelling a rat. “The 42nd Street library isn’t the only library in trouble,” a man said. “It’s the whole library system.” A lady in her seventies told of standing up to Robert Moses and winning. “We’re not gonna watch our libraries be demolished!” she said. “We want the library we have, nothing less! The minute you give in to their conditions you’re finished! You get bupkis!” I sat and listened, and some of what I heard was this:
The city is deliberately underfunding the libraries despite library use being way up. Perfectly good libraries are being labeled ‘Dilapidated’ to justify their destruction. Librarians have been warned to sound enthusiastic if asked about any such plans. The money from the sale of libraries will not go back into the library system, despite what library brass may say. The NYPL has a plan to create a “paperless library” within a few years. The library is public. The developers are private. The public library has always been the most trusted institution in the city, and it must be kept public.

“The minute you give in to their conditions you’re finished! You get bupkis!” What she said. More like this, please.

NOTE * And I’m totally certain that the fact that “Mike” Bloomberg’s live-in girlfriend, Diana L. Taylor, sits on the board of Brookfield Properties, which owns Zucotti Park, has nothing to do with anything, except in the sense that these dense webs of interconnection have everything to do with everything. Especially in New York real estate.

NOTE ** This kind of fight, for public purpose, and public space, and public good, is the flip side of the fight of the food workers for a living wage. Because if they didn’t have to work from dawn ’til dusk they might have a chance to go to the library, as millions of working people have done from the days of The Making of the English Working Class ’til our own era. Note again the demand for phyical books (which, among other things, don’t send your location t the NSA’s server in Utah when you read them).

NOTE Readers, I’d like to follow this story of civic engagement, so if you have more and better resources, please live them in links.