Yves here. I don’t want to be withholding good news when there is good news to be had. But remember, the ISM results for Europe are just over 50, which is the difference between growth and contraction. So in this context, “good news,” given how high unemployment is in the Eurozone periphery, is sort of like “the vital signs are improving enough that the patient might be able to leave intensive care and go into a regular hospital room.”

Some more good news from the Eurozone, and in fact broader Europe, overnight with the release of the manufacturing PMI data.

Eurozone manufacturing returns to growth at start of third quarter

• Final Eurozone Manufacturing PMI at two-year high of 50.3 in July (flash: 50.1)
• PMIs rise in all nations except Spain
• Price pressures remain on the downside, as input costs and output prices fall further 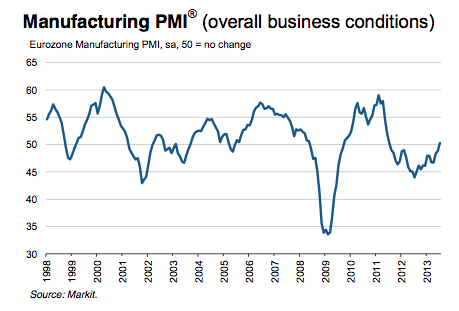 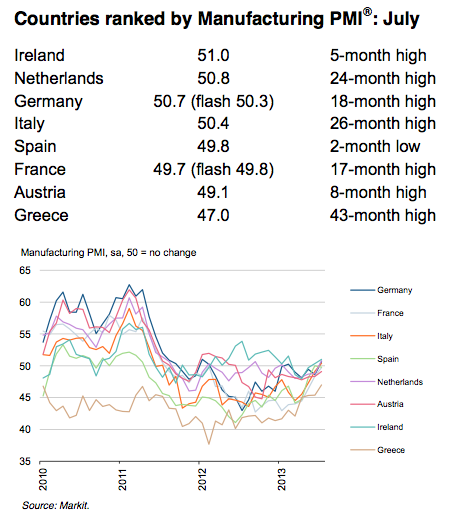 July PMI data signalled a welcome return to growth for the Eurozone manufacturing sector. Production and new orders both increased at the fastest rates since mid-2011, as new export business expanded and a number of domestic markets moved closer to stabilisation

By country, Germany recorded the strongest output growth in July, mainly due to improving domestic demand as new export orders declined (albeit at a slower pace). Production increased further in Italy, the Netherlands and Ireland, and returned to growth in France and Austria. Unlike Germany, the expansions in these nations were generally led by solid increases in new export business.

Greece remained the worst performer overall, recording the steepest reductions in output, new orders and new exports of all the nations covered by the surveys. Spain was the only nation to report a faster rate of contraction in output.

Job losses were recorded at eurozone manufacturers for the eighteenth month running in July, although the rate of reduction was the weakest during that period. Meanwhile, backlogs of work fell at the slowest pace in over two years.

Comments from Markit’s economists are more up-beat than they have been for some time, but there is still caution to be had on the back of unemployment.

Eurozone manufacturing made a positive start to the third quarter, with welcome signs of growth returning to the sector. The PMI rose to a two-year high, as rising export demand and stabilising domestic markets took growth of new orders and output to rates, albeit still modest, last scaled in mid-2011. This hopefully places the sector nicely to provide a positive spur to the third quarter GDP numbers and help the euro area exit recession.

Manufacturing output rose again in Germany, Italy, the Netherlands and Ireland during July, while there were welcome returns to growth for France and Austria. The breadth of the expansion will hopefully aid in its sustainability. Even the downturn in Greece showed signs of easing, while Spain saw its second-weakest contraction for over two years.

The bugbear of eurozone manufacturing remains its lacklustre labour market, which contributes to the persistent joblessness of the region as a whole. Even here there were tentative signs of recovery, with the rate of manufacturing job losses easing to a one-and-a-half year low. Meanwhile, falling commodity prices and intense competition are still keeping inflationary pressures in the sector at bay and posing no real issues for policymakers.

So overall some pretty positive news and I am happy to see Italy get a bit of a lift as I have some genuine concerns about the longevity of the Italian economy. That said, as I have been saying over the last few months, we need to caveat all of this with some macro-economic realities. As I mentioned again earlier in the week, although we are seeing some turn around in economic data in much of southern Europe government balance-sheets are still expanding in order to support this against the retrenching private sector.

Until this data release, and in spite of the on-going political issues and and massive unemployment problems, Spain was looking like it was doing a fair job of slowly moving towards an export driven recovery. It must be noted however, as reported by El Pais, the Spanish central government has already reached its deficit limit of 3.8% for the year and there is still 6 months to go. The government is hoping for increased tax revenues in the second part of the year, but it is quite possible that this will have a more negative effect than a positive one. It will therefore still take quite a substantial lift in GDP to get Spain back into a situation where it can bring down its deficits. so without a further uplift in internal economic activity and/or export demand it is likely that Spain at some time in the future will require some further form of debt relief. This is obviously also true for Portugal, Cyrpus and Greece which, once again, the IMF all but admitted in its latest review.

Services PMIs are due on the 5th, hopefully we’ll see an uplift there too.

Overnight the ECB left rates on hold. The full text of Mario Draghi’s press conference is here and the web stream is here if you are interested. There really wasn’t anything new in any of it in terms of economics, although there was some interesting discussion in the Q&A about the way in which the ECB will provide forward guidance in the future.

Full report from Markit below