I’ve said this before in other venues, but this really is the chart that explains modern America: 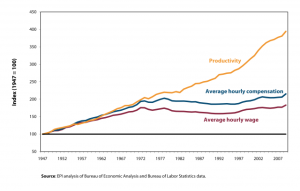 And I tend to think it explains every single economic challenge that we face. It clearly stands in for inequality, as all the wealth accumulated from the productivity gains does go somewhere, mainly into the hands of a rentier class. The over-financialization of the economy sprouted as a way to manage and divert these productivity gains after they didn’t flow to labor, in addition to demanding that these gains not get plowed back into wages. Flat wages play a part in ever-expanding credit bubbles, in the low savings rate and the easy enticement of get-rich quick schemes or simply desperate borrowing to maintain standards of living. The skyrocketing cost of tuition and the subsequent student debt bubble comes with the bill of sale that the only way to escape wage stagnation is to shuffle through the meritocratic assembly line and purchase more and more education (this is a chimera, as wage growth has slowed for college graduates as well, and student debt additionally hinders prosperity). Wage stagnation is at the heart of our low household formation and the implications for construction and building trades. It’s why QE is more and more meaningless to a larger and larger class of wage-flatlined Americans (particularly Treasury purchases, at least in the view of that linked Jackson Hole paper). It defines the middle-class squeeze, the two-income trap, the inadequacy of retirement resources and the flow of so much of that system into the waiting arms of the financial services industry. I’m sure you could come up with something that doesn’t lead back into wage stagnation (climate change? I think I could argue it), but I think my point stands.

Therefore, I find the Economic Policy Institute’s report this past week (a few days old in Internet time, but it’s important) on a decade of flat wages from before and after the Great Recession to be at once essential reading and also rather incomplete, because it’s just another chapter in what is now a forty-year story, with no sign of abatement. Larry Mishel and Heidi Shierholz are right to say that “an economy that does not provide shared prosperity is, by definition, a poorly performing one.” And so we’ve had a poorly performing economy for nearly half a century.

EPI does acknowledge this (“most workers have experienced weak wage growth for more than three decades”), but sets this paper in the context of a ten-year issue because of the intervening segment of the late 1990s, when we had tight labor markets and some broad wage gains. However, as Dean Baker often shouts from the rooftops, this was built on a foundation of sand, driven by a stock bubble and an overvalued dollar which cost millions of jobs and set the stage for a further redistribution of wealth.

Wherever you set the marker, this remains the fundamental issue for the vast majority of Americans. I think the key findings speak for themselves:

According to every major data source, the vast majority of U.S. workers—including white-collar and blue-collar workers and those with and without a college degree—have endured more than a decade of wage stagnation. Wage growth has significantly underperformed productivity growth regardless of occupation, gender, race/ethnicity, or education level.

During the Great Recession and its aftermath (i.e., between 2007 and 2012), wages fell for the entire bottom 70 percent of the wage distribution, despite productivity growth of 7.7 percent.

The weak wage growth over 2000–2007, combined with the wage losses for most workers from 2007 to 2012, mean that between 2000 and 2012, wages were flat or declined for the entire bottom 60 percent of the wage distribution (despite productivity growing by nearly 25 percent over this period).

Wage growth in the very early part of the 2000–2012 period, between 2000 and 2002, was still being bolstered by momentum from the strong wage growth of the late 1990s. Between 2002 and 2012, wages were stagnant or declined for the entire bottom 70 percent of the wage distribution. In other words, the vast majority of wage earners have already experienced a lost decade, one where real wages were either flat or in decline.

This is all worse when you consider that the relatively better wage growth in 2012-2013 is probably a factor of lower inflation. Clearly the labor market is slack enough that no employer needs to reach and offer higher wages to retain personnel. Meanwhile, unemployment benefits are shrinking in all states (a consequence of Congressional deals which rolled back emergency benefit tiers – you can’t get more than 73 weeks now, down from 99 weeks, and in many states it’s down to 46 weeks) at a faster rate than the labor market has actually improved.

The key pull that EPI’s Josh Bivens makes in a follow-up post is that profit growth looks about the same in the post-Great Recession recovery as in other recent ones. If the profit share was even at the 1979-2007 average, Bivens calculates that the result would be an additional $350 billion in labor income, or an additional $6,900 for every worker in the corporate sector. And this would have sparked greater consumer spending, leading to a faster recovery. As it is, corporate profits returned with enough rapidity that elites were able to pivot quickly away from stimulus and toward deficit reduction.

A last, possibly peevish sidenote—while we’re often accused (correctly!) of being pretty gloomy on the economic picture for most American families, we’re also often accused (incorrectly!) of feeding a sense of fatalism by not providing potential solutions or highlighting what could be changed. We’ve got some solutions here, and, we should note that there is a glimmer of good news in Larry and Heidi’s analysis: we are a rich country that gets richer just about every year. Look at the productivity trends (check out Table 1) in their piece—in 2012 productivity was nearly 8 percent higher than it was at the start of the Great Recession! The problem is insuring that these potential income gains actually are broadly shared—and this is mostly a political problem.

Bivens claims that political problems are better than economic problems, but I’m not sure I agree. If political problems could be surmounted there would have been something approaching progress at some point over the past forty years. It took us until 2011 to even name the problem in public, and even then through the bumper sticker rhetorical device of the 99%. EPI cites globalization, deregulation, weaker unionization and a lower relative minimum wage as the culprits. Workers are given cheap Chinese-made goods at Walmart to allegedly compensate for flat wages. But the high cost of low prices is obvious. And while there are solutions to all of this, the cast of characters that line up on either side made it plain that establishing progress on any of these fronts will be a torturous slog.

Incidentally, if you look at the version of the productivity/wage chart in the EPI paper that’s updated from 2000-2013, you’ll see that the productivity growth really accelerated starting with the first quarter of 2009, while labor growth started to fall from its high-water mark. What happened then?

(A cheap shot, perhaps – the bounce-back off the recession is a factor – but one to consider. No party held a monopoly in the 1973-2013 period.)