There is much confusion about what shadow banking is and why it may create (systemic) risks:

Backstops can come in the form of franchise value of a bank or insurance company, or a government guarantee. The need for a backstop is a crucial feature of shadow banking, which distinguishes it from the “usual” intermediated capital market activities, such as custodians, hedge funds, leasing companies, etc.

It Has Been Very Hard to Define “Shadow Banking”

The Financial Stability Board (2012) describes shadow banking as “credit intermediation involving entities and activities (fully or partially) outside the regular banking system”. This is a useful benchmark, but has two weaknesses:

But in practice, many shadow banking activities, for instance, liquidity puts to securitisation structured investment vehicles, collateral operations of dealer banks, repos, and so on, operate within banks, especially systemic ones (Pozsar and Singh 2011, Cetorelli and Peristiani 2012). Both reasons make the description less insightful and less useful from an operational point of view. 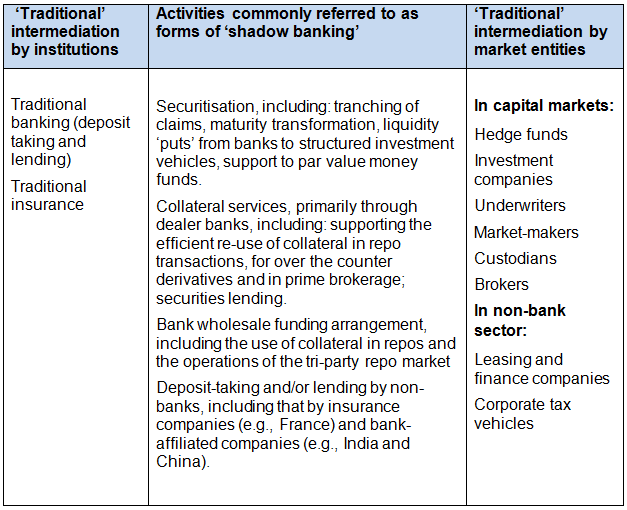 An alternative – ‘functional’ – approach treats shadow banking as a collection of specific intermediation services. Each of them responds to its own demand factors (e.g., demand for safe assets in securitisation, the need to efficiently use scarce collateral to support a large volume of secured transactions, etc.). The functional view offers useful insights. It stresses that shadow banking is driven not only by regulatory arbitrage, but also by genuine demand, to which intermediaries respond. This implies that in order to effectively regulate shadow banking, one should consider the demand for its services and – crucially – understand how its services are being provided (Claessens et al. 2012).

A New Way to Define “Shadow Banking”: All Activities that Need a Backstop

Why Do Shadow Banking Activities Always Need a Backstop?

Shadow banking, just like traditional banking, involves risk transformation – specifically, credit, liquidity, and maturity risks. This is well accepted by the existing literature, and fits all shadow banking activities listed in Figure 1. The purpose of risk transformation is to strip assets of ‘undesirable’ risks that certain investors do not wish to bear.

Traditional banking transforms risks on a single balance sheet. It uses the law of large numbers, monitoring, and capital cushions to ‘convert’ risky loans into safe assets to back deposits. Shadow banking transforms risks using a different mechanism. It aims to distribute the undesirable risks across the financial system (‘sell them off’ in a diversified way). For example, in securitisation shadow banking strips assets of credit and liquidity risks through tranching and providing liquidity puts (Pozsar et al. 2010, Pozsar 2011, Gennaioli et al. 2012). Or it facilitates the use of collateral to reduce counterparty exposures in repo markets and for over the counter derivatives (Gorton 2012, Acharya and Öncü 2013).1

While shadow banking uses many capital markets type tools, it differs also from traditional capital markets activities – such as trading stocks and bonds – in that it needs a backstop. This is because, while most undesirable risks can be distributed away by shadow banking processes, some residual risks, often rare and systemic ones (‘tail risks’), can remain. Examples of such residual risks include systemic liquidity risk in securitisation, risks associated with large borrowers’ bankruptcy in repos and securities lending, and the systematic component of credit risk in non-bank lending (e.g., for leveraged buyouts). Shadow banking needs to show it can absorb these risks to minimise the potential exposure of the ultimate claimholders who do not wish to bear them.

Yet shadow banking cannot generate the needed ultimate risk absorption capacity internally. The reason is that shadow-banking activities have margins that are too low. To be able to easily distribute risks across the financial system, for example, shadow banking focuses on ‘hard information’ risks that are easy to measure, price and communicate, e.g., through credit scores. This also means these services are generally contestable, with too low margins to generate sufficient internal capital to buffer residual risks. Therefore, shadow banking needs access to a backstop, i.e., a risk absorption capacity external to the shadow banking activity.

The backstop for shadow banking needs to be sufficiently deep:

There are two ways to obtain such a backstop. One is private – by using the franchise value of existing financial institutions. This explains why many shadow banking activities operate within large banks or transfers risks to them (as with liquidity puts in securitisation). Another is public – by using explicit or implicit government guarantees. Examples include, besides the general too-big-to-fail implicit guarantee provided to those large banks active in shadow banking, the Federal Reserve securities lending facility that backstops the collateral intermediation processes, the implicit too-big-to-fail guarantees for tri-party repo clearing banks and other dealer banks (Singh 2012), the bankruptcy stay exemptions for repos which in effect guarantee the exposure of lenders (Perotti 2012), or implicit guarantees on bank-affiliated products (as widely described in the press regarding so called ‘wealth management products’ in China (see The Economist 2013, Bloomberg 2013a, 2013b)) or on liabilities of non-bank finance companies (as noted for India, see Acharya et al. 2013).

Assessing whether an activity requires access to a backstop to operate could be used as the key test of whether it represents shadow banking. For example, the ‘usual’ capital market activities (in the right column of Figure 1) do not need external risk absorption capacity (because some, like custodian or market-making services, involve no risk transformation, while others, like hedge funds, have high margins), and so are not shadow banking. Only activities that need a backstop – because they combine risk transformation, low margins and high scale with residual ‘tail’ risks – are systematically-important shadow banking.

Acknowledging the need for a backstop as a critical feature of shadow banking offers useful policy implications:

Among financial activities that need franchise value or government guarantees to operate. Non-traditional activities of banks or insurance companies are ‘prime suspects’. It is hard to point to the shadow banking-like activities which may give rise to future (systemic) risks conclusively, but one example could be the liquidity services provided by sponsor banks to exchange traded funds, or large-scale commercial bank backstops for leveraged buyouts.

Regulators can control shadow banking by affecting the ability of regulated entities to use their franchise value to support shadow banking activities (as was done in the aftermath of the crisis by limiting the ability of banks to offer liquidity support to structured investment vehicles). Or by managing the (implicit) government guarantees (as is attempted in the US Dodd-Frank Act by limiting the ability to extend the safety net to non-bank activities and entities; or by general attempts underway to reduce the too-big-to-fail problem).

Shadow banking activities cannot migrate on a large scale to areas of the financial system that do not have access to franchise values or government guarantees. This by itself does not make spotting the activity occurring within the reach of the regulator necessarily easier, but at least it narrows the task.