“He Took the Time to Chat”: Ken Starr’s Plea for a Child Molester Gawker (Carol B). Lordie

The Most Nefarious Part Of The TPP Proposal: Making Copyright Reform Impossible TechDirt (Chuck L). Well, I think killing people via insuring overpricing of drugs is more nefarious, but I will grant this is high on the list.

Hunger and resignation in Tacloban BBC

Obama ‘brainstorms’ with insurance executives McClatchy (Lambert). This is one of the most absurd headlines I have read in a very long time.

The sinking ship of Obamacare Kathleen Parker, Washington Post. Includes discussion of procedural basis for “you can have your insurance back” fix.

The Fix Is In: Can President Obama Grant An Effective ACA Waiver To Millions Of Disgruntled Citizens Jonathan Turley (Chuck L). Begs to differ with Parker.

America is $17 Trillion in Debt — Here’s Why You Shouldn’t Be Worried PolcyMic. Awful headline, but the article is worthwhile.

Democrats will fight for infrastructure investment and unemployment benefits in budget talks Daily Kos (Carol B). BTW, did you notice we’ve heard NOTHING about the budget negotiations as a result of the Obamacare train wreck?

Yellen In Line to Head Fed, But How Will She Lead? Real News

#AskJPM underscores risks of Twitter engagement Financial Times. My God, the degree of denial in corporate American is stunning. The #askJPM fiasco is treated merely as a PR fiasco (which it was) as opposed to a sign of well warranted ire directed at a predatory institution that demonstrates no interest in changing its conduct.

The Human Hack: How to Fight an Internet Risk Technology Can’t Fix Bloomberg

Geithner To Join Warburg Pincus’ As President and Managing Director Wall Street Journal. Well, he could have wound up places where he could do a lot more damage. Let’s hope we are spared Greenspanian defenses of how the Fed did so well before and during the crisis.

JPMorgan to pay $4.5bn over mis-selling mortgage securities Financial Times. I may write on this if I succeed in fighting off a bug. This is lousy reporting. The deal is NOT with investors, it’s with the trustee who is eager to get out of the monster liability he has by failing to do his job.

Eeyore locutus Michael Smith (Carol B). My kind of guy.

Antidote du jour. What is with those skunks’ tails? Are there hair extenders for skunks? And I never knew they can be litter box trained.

Oh, and separately, my cat Blake (named for William Blake, and smart enough not to get stuck behind bookcases) is 14 today! 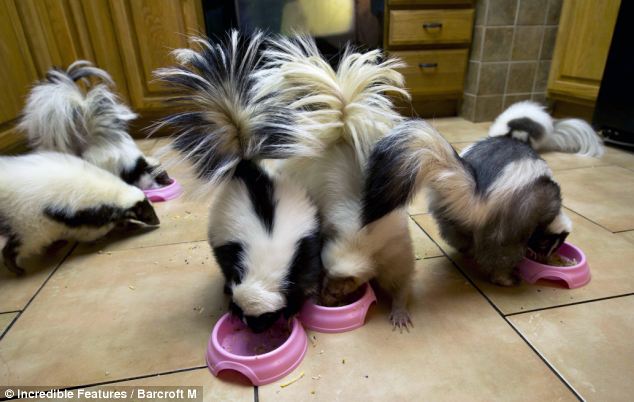