Michael Olenick unearthed an anomaly that is so extreme that it raises doubts about the numbers that the Department of Health and Human Services is reporting for Obamacare signups and enrollments to date. He writes:

Following up about the rightfully maligned healthcare.gov website, and the software which underlies it, I can verify the program appears significantly sicker than anybody admits. As a Florida resident using the Federal exchange, I was never able to view plans despite working feverishly at it for over a month. I finally reached a worker at healthcare.gov who told me the site simply doesn’t work. She heard that state exchanges were better but verified that she has never personally seen anyone from Florida able to move past the last screen to view or purchase plans.

Yet the Department of Health and Human Services boasts about their signup success. Lambert pointed me to this October 26 statement by Kathleen Sebelius, What’s Working in the Marketplace: The Data Services Hub, which proclaims:

The Social Security Administration has reported 4.2 million transactions involving individuals or households who have elected to establish an account… The highest numbers of transactions continues to involve individuals and households in the following states: Pennsylvania (323,000), New York (310,000), California (290,000), West Virginia (240,000), and Washington (135,000).

Yves here. This extract from Sebelius is a remarkable confection of disinformation.

Let’s start with a basic issue: What exactly is a transaction? Normally, you’d assume that means signing up for insurance. My trusty desktop dictionary defines a transaction as “an instance of buying or selling something; a business deal.” But here in a typical Obama Orwellianism, that’s redefined to something, but we’re not sure exactly what, that prospective insurance customers do after the’ve managed to set up an account. So it’s clear they aren’t even within hailing distance of the conventional use of “transaction” which would be a completed enrollment (or in Obamacare speak, a clean, unique 834 transaction). We know those numbers are tiny for the Federal exchanges, hence the desperate effort to point at anything that looks like progress, particularly if you can attach big impressive-sounding numbers to it.

But the simple layperson way to think about this is that a transaction in this case means some sort of interaction with a database. This is Oracle’s definition:

So for example you could have a number of SQL statements to set up an account, each with it’s query, like one for the name, another for family members, another for income, and so on. It would seem reasonable that ALL the fields to create an account would be a transaction, because that’s what you would want to be able to roll back. I think there would be a minimum of two transactions: 1 for the account, 2 for the plan. But there’s probably tons more, to save state between sessions, or to roll back incomplete file transmissions, say.

In other words, this figure is just as meaningful as the “hits” figure they gave us at first.

And remember, merely setting up an account was a process that took weeks of daily attempts for Olenick, a computer professional, to complete.

I believe it is fair to infer that HHS/CMS – who did not respond to a written inquiry – is busted. They’re either outright lying about the number of accounts created or they somehow made it easier for people from West Virginia to use the federal exchange for testing. Either way their figures are grossly misleading.

I don’t mean to make an example of Olenick, but look what happened. He’s a careful reader, since he caught the significance of the numbers. Even so, we have an IT professional who works a lot with databases and hence more likely to be sensitive to what “transactions” might really mean per the HHS who was nevertheless taken in by Sebelius’ misdirection. He read her statement and took it to be referring to account creation, and not some mystery activities that take place after that point.

Nevertheless, his conclusion is correct. The figures are implausible, even more so than he suggests, as we will demonstrate.

This image underscores the point Olenick made, that despite its conventional association with moonshine and Appalachian poverty* (and West Virginia is indeed poor and rural), the state is middle of the road as far as the proportion of uninsured is concerned: 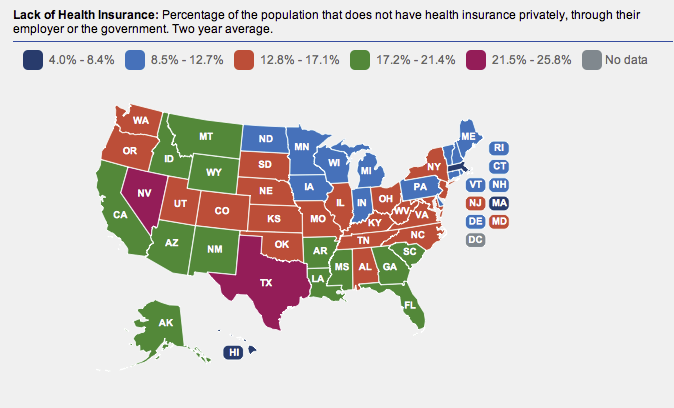 In December, as quoted by Associated Press (hat tip Lambert), “Tomblin administration officials estimate that between 37,000 and 60,000 people would seek coverage through this new marketplace.” So that 240,000 “transactions” for West Virginia is 4 times the highest number of individuals that state officials expected to sign up.

Pull out a calculator. The HHS number might be read to be making the bold claim that 92.3% of the entire uninsured population in West Virginia has signed up (240,000 divided by the uninsured population of 260,000). But uninsured individuals does not equal the number of accounts that would be created to insure them. Uninsured children and spouses would all sign up as part of a household; in fact, one of the most annoying and difficult parts of the Federal exchange account creation process is apparently telling the system who in your family is going to be signing up with you and identifying their relationship to the person creating the account correctly.

So take that 260,000 and divide it by the average household size in West Virginia, which per the Census Bureau, is 2.43. That might slightly understate the number of parties that might seek accounts (unmarried couples would apply as individuals) but it’s closer to the mark. You have roughly 110,000 uninsured households as the total universe.

Now remember, Obamacare (plus expanded Medicaid) was never was intended to cover them all. Nationally, over 30 million people were expected to remain uninsured, some because they weren’t eligible, others because they opted out (either by choice or necessity, as in the plans were too costly even with the subsidies). The CBO estimated that 14 million of the 48 million now uninsured will become covered as a result of Obamacare. That ratio is 29%. So, making some crude assumptions, you’d expect 30% of West Virginia’s households to sign up, which is 33,000. This is generally consistent with the state government’s estimates of 35,000 to 60,000, because those higher figures are for the number they expect to “seek insurance” which will include people who find they aren’t eligible or opt out once they look at the policies. Some subset of that set up accounts and has engaged in 240,000 “transactions.” Given how hard Olenick found it to be to establish an account, one has to believe that the number who have accounts is way lower than the 60,000, which is the highest estimate of the relevant universe we have so far, and that mean the average number of transactions per account in West Virginia is therefore considerably higher than four.

The wildly disproportionate level of transactions relative to the eligible population is even more ridiculous once you do more digging. You’d expect West Virginia to have its enrollment level as a percent of its uninsured population to be considerably lower than that of other states. Why? 35.9% of the population has no Internet connection anywhere, and over 20% does not have a computer at home, according to the Census. And yes, the Census was smart enough to capture people who don’t have either a computer or Internet access at home but use the Internet elsewhere; that’s an additional 5.0% of the total. And you can be sure those with no Internet access would be overrepresented among uninsured households, since both would skew poor.

And it’s not as if outreach could explain this difference. The Administration’s outreach efforts are targeting the “young invincibles” and Hispanics, who aren’t heavily represented in West Virginia.

Why are we harping on these numbers? Because the Administration is trying to turn a metric of failure into a badge of success. More transactions per person is not a good outcome. In this context, it likely means (among other things) difficulties finding information the prospective buyers found relevant (like “is my doctor part of the network?” or “are abortions included?”), trouble with subsidy information, and hangups in completing the enrollment.

The West Virginia outlier in theory could result from the fact that its exchange is a bastard child, a “partnership marketplace“:

A state that partners with HHS may assist HHS with certain functions, such as making qualified health plan recommendations and conducting aspects of consumer outreach and assistance.

But there’s no obvious reason why in practice it should be any worse than the Federal exchanges. Per Forbes (hat tip Lambert):

In a state-federal partnership, states will divide obligations with the federal government. For this partnership model, as well as the state-state partnership option, there is no requirement for a 50-50 split of labor. The states are actually more of a façade, whereby the consumers (individuals and employers) merely interact with the state. The federal government, on the other hand, will essentially perform all functions of exchange management except customer service and plan management. Moreover, states have the choice to take responsibility for only one or both of those functions.

And Sebelius is taking ownership for the West Virginia results and including it in her “hub” success stories, so the Administration acts like it owns the results no matter what the branding is.

None of the plausible explanations are flattering.

1. The HHS numbers are as utterly error-filled as everything about Obamacare, but no one cares about accuracy if the PR message is good

2. The Administration is just plain lying and assumes no one will catch it (“There’s a lot of black lung in West Virginia, so of course people in that state will sign up in droves!”)

3. The Administration has come up with some highly technical definition of transaction (as in particular types of database queries) so that their figures are technically correct even if by any commonsense standard the related declarations are lies

Given that the Administration has highly competent technologists working with the NSA, one would have hoped it would enlist them to cut the healthcare.gov Gordian knot. It now does look like the HHS types have called on the folks at the NSA, but only the ones who are experts in misleading wordsmithing under fire.

____
* I am permitted to say that sort of thing about West Virginia since I was born there.