Now that the consumer front end of Healthcare.gov seems to be under control (the insurer interface is another matter), public attention is now shifting to the ultimately more important question of what benefits patients receive, and at what cost.

One thing Lambert has stressed in the arbitrariness and therefore inequity in the way similarly situated individuals can wind up in Obamacare. Winding up on the wrong side of a subsidy cutoff line makes a difference. What state you are in will very often make a difference. And another issue he’s mentioned is that while some people will wind up better off, the question is how many people will wind up materially worse off. It’s almost certain that the outcome will be to result in a net negative across all consumers because Obamacare is a stealth handout to insurers and Big Pharma. It is intended to force more healthy individuals who went uninsured into the pool, and it also allows insurers to fatten their profit margins from pre-Obamacare rules. Big Pharma benefits from a prohibition on drug reimportation.

The Wall Street Journal tonight discusses a new “surprise” in Obamacare, that of how drugs are handled. The article notes that the people who are at risk are those who have chronic ailments that are treated with costly drugs. Here’s the nub of the issue (click on image to enlarge):

Under the law, patients can’t be denied coverage due to existing conditions or charged higher rates than healthier peers. The law also sets an annual out-of-pocket maximum of up to $6,350 for individuals and $12,700 for families, after which insurers pay the full tab. 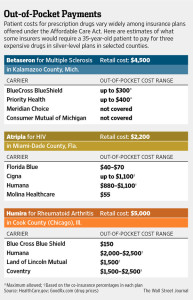 But depending on the coverage they select, some patients on expensive drug regimens could reach that level fast. Some medications for conditions including hepatitis, rheumatoid arthritis, HIV and cancer can retail for thousands of dollars a month, and some plans require patients to pay as much as 50% of the cost…

In general, the lower a plan’s monthly premium, the higher the portion of drug costs patients must bear. But an array of other factors also affect cost to patients—including whether a medication is on the insurer’s covered-drug list, or formulary; in what level, or tier, of coverage it is; and what cost-sharing formula applies to that tier, which can vary from plan to plan even among those offered by the same insurer in the same bronze, silver or other category.

A drug’s tier—generally divided into generic, brand, preferred and specialty categories—is often determined by price negotiations between insurers and drug makers and can make a huge difference in patient costs…

In a study of 22 carriers in six states, Avalere Health found that 90% of bronze plans (with generally the lowest premiums) require patients to pay a percentage of costs, 40% on average, for drugs in tiers 3 and 4, compared with 29% of employer-sponsored plans that most Americans currently use. Most silver plans also require patients to pay 40% for the highest-tier drugs, although some have flat fees of $70 to $270, the study found.

Now let’s not kid ourselves. Current private insurance plans often put a lot of the burden of pricey drugs on the patient. But the bronze plan v. employer-sponsored plan comparison above shows that patients will often face bigger financial charges than their peers who are on the corporate meal ticket.

And one way in which the ACA does citizens a disservice is that it makes it hard to find the information to enable citizens to navigate the drug minefield successfully. Again from the Journal (emphasis ours):

Finding all the pertinent information for each plan is a challenge. The retooled federal HealthCare.gov website makes researching plan differences somewhat easier, patient advocates say, but it still takes many steps and some plans require shoppers to formally apply before seeing all the details.

Now as I read that, “formally apply” = enroll. How do you undo an enrollment, or (if it really is different) a “formal application”? What happens if you can’t unenroll quickly or easily and wind up signed up to two policies in order to meet the deadline?

The good news is that some people will wind up better off than now; the Journal includes one as an anecdote in its article, a 61 year old suffering rheumatoid arthritis. But even with extensive research, she’s having trouble figuring out which plan is best.

The article flags another issue which will hit some patients hard:

Many foundations, government programs and drug makers help patients with chronic illnesses pay their share of drug costs. The pharmaceutical industry gave out more than $4 billion in discount coupons or cards in 2011, according to the Amundsen Group, a consulting firm. In some cases, those discounts make even very expensive drugs effectively free to patients, while still helping them meet their out-of-pocket maximums, says Mason Tenaglia, the firm’s managing director. “After that, the insurer is paying full price.”….

But an HHS spokeswoman said last week the agency discourages such payments and encourages insurers to reject them.

The coupons are a method to get doctors and patients to select a particular brand, but if they are designed to help push a lot of patients past the maximum out of pocket limit, it’s basically a way for drug companies to post artificially high drug prices and dump more of the cost on insurers. But the government coming down on the side of insurers in this Godzilla versus Mothra battle appears to throw patients under the bus too. Not that that’s necessarily a surprise, mind you.