Yves here. I’m a big fan of economic history (and mystified that contemporary economists so rarely take interest in it). Pilkington describes an illuminating and oft-neglected chapter.

By Philip Pilkington, a writer and research assistant at Kingston University in London. You can follow him on Twitter @pilkingtonphil. Originally posted at Fixing the Economists

So, I was doing a bit of that aimless reading one so often does on the internet and I came across the transcript from the trial of Hjalmar Schacht at Nuremberg after the war. Schacht was, of course, the chief architect of Nazi economic policy and the inventor of the infamous Mefo bill, which we shall discuss in more detail below. The transcript is fascinating because it includes a nice overview of Nazi economic policy during the war and the years of rearmament.

I’ll give some context first of all. As is well-known, after WWI the allies had banned the defeated Germany from having a size-able standing army. In the 1930s, however, after the election of Hitler in 1933 the allies moved more and more to appease the Nazi regime and effectively looked the other way as the Nazis rearmed. But rearmament still had to be done under something of a cloak of darkness. One of the restrictions on Germany was that the government was only allowed to borrow 100m Reichsmark from the Reichsbank (the German central bank at the time). With such a budget limit in place Germany could not obtain the funds needed to rearm. So Hitler turned to Schacht who was, with the notable exception of Albert Speer, one of the only higher-ups in Germany at the time with any degree of intelligence.

The first step, of course, was to obtain financing. In order to do this Schacht introduced the Mefo bill which the Nuremberg prosecution described as such,

Transactions in “mefo” bills worked as follows: “mefo” bills were drawn by armament contractors and accepted by a limited liability company called the Metallurgische Forschungsgesellschaft, m.b.H. (MEFO). This company was merely a dummy organization; it had a nominal capital of only one million Reichsmarks. “Mefo” bills ran for six months, but provision was made for extensions running consecutively for three months each. The drawer could present his “mefo” bills to any German bank for discount at any time, and these banks, in turn, could rediscount the bills at the Reichsbank at any time within the last three months of their earliest maturity.

It was not a terribly complex plan. The military contractors were paid in bills of exchange issued by a shell company. These contractors would then take the bills to a private German bank which would then gladly turn over cash to the holder because they knew that they could then hand the Mefo bill to the Reichsbank which would in turn convert it into cash using their money-issuing powers.

The resulting spending resulted in the German economic boom that took place under Hitler. Here is a nice graph from Erwin Mahe that compares the growth and inflation in Nazi Germany to that in the Netherlands in those dark years: 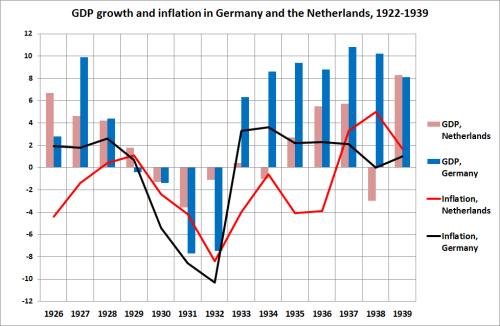 This is an incredible story from an economic point-of-view. After Hitler’s election in 1933 the Nazis were able to sustain between about 8-10% GDP for five years running with an inflation rate that would be the envy of the Bank of England and other inflation-targeters today. Now, we know how this growth was financed — that is, by money issuance — but how was it achieved? Here we turn back to the Nuremberg transcripts.

Well, first of all the capital markets were brought firmly under control so that rearmament became priority number one. The prosecution explains,

Next Schacht seized control over the foreign exchange market to ensure that only those goods that were truly needed for the war machine — such as raw materials — were imported. This was referred to as the ‘New Plan’.

There were three main features of the “New Plan” as devised by Schacht: (1) restriction of the demand for such foreign exchange as would be used for purposes unrelated to the conspirators’ rearmament program; (2) increase of the supply of foreign exchange, as a means of paying for essential imports which could not otherwise be acquired; and (3) clearing agreements and other devices obviating the need for foreign exchange… These agencies, which were under Schacht’s control as Minister of Economics, decided whether given imports and exports were desirable; whether the quantities, prices, credit terms, and countries involved were satisfactory; and in short, whether any particular transaction advanced the conspirators’ armament program.

In addition to this Schacht took advantage of the clearing system that existed (and basically still exists) and allowed other countries’ exporters to send Germany raw materials in exchange for claims on the German clearing house. These claims are then only paid when Germany stops running a trade deficit and begins running a trade surplus. What follows is an amazing moment in Nuremberg where the truth of the international clearing system is laid bare for all to see.

And why did the other countries’ clearing houses turn the other cheek and accept claims that may never be paid? Well, ask yourselves why China pegs its currency to the dollar and you’ll likely come up with the answer: they desperately want to take advantage of the aggregate demand provided by the foreign consumer. Here is the Nuremberg prosecutor making a far more savvy economic argument than many modern commentators manage in their lifetime,

This device was used by Schacht as a means of exploiting Germany’s position as Europe’s largest consumer in order to acquire essential raw materials from countries which, because of the world wide economic depression, were dependent upon the German market as an outlet for their surplus products.

How did Schacht dare to take what must have seemed to others to be enormous policy risks by bending both the domestic and international monetary system to the will of the Nazis? Because, it seems, Schacht was a very sophisticated economist who was not only far ahead economists in his own time but is also far ahead of most economists in ours. Here is a quote from Schacht… the Keynesian,

It has been shown that, in contrast to everything which classical national economy has hitherto taught, not the producer but the consumer is the ruling factor in economic life.

I believe what Schacht is here getting at that, as Keynesian economists know well, it is the demand-side of the economy which is important in most respects. The supply-side — the producer — is of secondary importance.

Schacht also invented what was called the ‘aski’ system to ensure that money paid for imports was then only spent on German exports. This seems to have been done through negotiation and, despite the sometimes moronic trade laws that exist in our world today, would certainly be worth another look by development economists should we ever move into a more enlightened future.

This scheme likewise obviated the need for free currency (i.e. Reichsmarks freely convertible into foreign currency at the official rate-U. S. dollars, pounds sterling, etc). The system worked as follows: The German foreign exchange control administration would authorize imports of goods in specified quantities and categories on the condition that the foreign sellers agreed to accept payment in the form of Mark credits to accounts of a special type held in German banks. These accounts were called “aski”, an abbreviation of Auslander Sonderkonten fuer Inlandszahlungen (foreigners’ special accounts for inland payments). The so-called “aski” Marks in such an account could be used to purchase German goods only for export to the country of the holder of the account; they could not be converted into foreign currency at the official rates of exchange. Each group of “aski” accounts formed a separate “island of exchange” in which the German authorities, under Schacht’s leadership, could apply their control as the country’s bargaining position in each case seemed to warrant.

Schacht’s ‘New Plan’ for the foreign sector of the German economy was enormously successful and probably contributed significantly to the low inflation in Germany in those years noted above. But what was going on at home? We know that Schacht had suppressed the capital market in what can only be described as the ultimate historical instance of ‘crowding out’ and we know that he had freed up the fiscal system to be used in any way he pleased but what was going on in domestic industry? It is to this we now turn.

Well, this is a rather simple story and can be told in a single paragraph: Schacht basically turned the German economy into a control economy. Here it is probably best to allow the Nuremberg prosecution to explain,

Schacht adopted a host of controls over the productive mechanism of Germany, extending, inter alia, to the allocation of raw materials, regulation of productive capacity, use of abundant or synthetic substitutes in place of declining stocks of urgently needed materials, and the erection of new capacity for the production of essential commodities. The structure of regulation was built up out of thousands of decrees in which governmental agencies under Schacht’s control issued permits, prohibitions, and instructions These decrees were the outgrowth of carefully laid plans of the Ministry of Economics, of which Schacht was the head, concerning “economic preparation for the conduct of war”, and in accordance with its view that “genuine positive economic mobilization” demanded that “exact instructions for every individual commercial undertaking are laid down by a central authority’.

All in all there is much that can be learned from Germany’s experience in the 1930s. While their attempts to control production and consumption directly are probably not suitable outside of warfare or rearmament Schacht’s monetary manipulations were, by any standard, rather ingenious. They were also extremely brave in that they had never been tried before and Schacht was not, so far as I can see, working off any truly articulated Keynesian theory. Rather he was working from the basis of intuition — an intuition, it should be noted, that was rather sharp.

So, what happened then to Schacht? Well, it turns out that he was not the monster those he worked for undoubtedly were. Even the prosecution conceded that “he was not in complete sympathy with that aspect of the Nazi Party’s program which involved the wholesale extermination of the Jews” and that he “gave aid and comfort to individual Jews who sought to escape the indignities generally inflicted upon Jews in Nazi Germany”. That is more than can be said of many German soldiers and officers who went home to their families after the war. Nor was Schacht an official member of the Nazi party, in fact he was a former liberal politician.

The Soviets, who wanted to convict Schacht, saw him as the man who had, through his economic genius, facilitated the growth of the Nazi war machine. The British, on the other hand, saw him as another instance of a common character type: an ambitious functionary who tied himself to the power structure in Nazi Germany while maintaining his distance and they favoured acquittal. In their own way, both sides were probably correct. But Schacht was acquitted and he went on to found a bank and give economic advice to developing countries. My guess is that this advice was far superior to that given by modern day economists.