Yves here. We’ve featuring a nice piece of crisis-related forensic work. Too bad we’ve seen so little of this sort of thing. The article describes some of the desperate and illegal measures pursued by one of the big Icelandic banks, Kaupthing, before its collapse. It draws some important lessons, including regulatory failures, both of the rules themselves and of lax oversight.

In 2008, Icelandic banks were too big to fail and too big to save. The government’s rescue attempts had devastating systemic consequences in Iceland since – as it turned out – they were too big for the state to rescue. This column discusses research that shows how this was a classic case of banks gambling for resurrection.

The demise of the three large Icelandic banks, just after the fall of Lehman Brothers, was a key event in the spread of the financial crisis. A couple of weeks before its collapse in October 2008, Kaupthing bank announced that the Qatari investor Sheikh Mohammed Bin Khalifa Bin Hamad al-Thani had bought a 5.01% stake. This briefly boosted market confidence in Kaupthing (Financial Times 2008). What market participants did not know was that Kaupthing illegally financed the deal, which was without risk to al-Thani.

Recently, four former top bankers at Kaupthing – including the CEO and the chairman of the board – were sentenced to jail for three to five-and-a-half years for fraud and for abusing and misleading markets by this trade (Financial Times 2013b). So far, these are the heaviest sentences handed out to bankers in Iceland. This was just one of many instances where Kaupthing financed purchases of its shares in private deals.

There are many historical precedents for banks trying to boost their share prices by covert financing of purchases. In writing l’Argent (1891), Emile Zola consulted records of the 1882 fall of Union Générale, whose CEO Paul Bontoux had done just that. It was illegal even then, and he was tried and convicted. Zola’s fictional character Aristide Saccard followed the same path. And in 2008, there was apparently similar behaviour outside Iceland. Thus “Barclays said the FCA [Financial Conduct Authority] has concluded that the main purpose of two advisory services agreements made between the bank and investment vehicle Qatar Holding LLC in June and October of that year [2008] ‘was not to obtain advisory services but to make additional payments [£322 million], which would not be disclosed, for the Qatari participation in the capital raisings.’” The Financial Conduct Authority has proposed a fine of £50 million, but as yet, no prosecutions (Wall Street Journal 2013).

In recent work, we study the rise and fall of the Icelandic banks, in the domestic and global macroeconomic context (Baldursson and Portes 2013). Kaupthing’s culpable strategy was a part of a large gamble for resurrection by Kaupthing and the others during the last year of their existence. A bank whose managers believe it to be insolvent may decide to conceal this from the regulator and carry on, doubling down with further risky bets, hoping for a good outcome (‘resurrection’) in the near future (e.g. Dewatripont and Tirole 1994).

Kaupthing’s Trading in its own Shares

Figure 1 shows Kaupthing’s ownership of its own shares as a percentage of issued shares from July 2007 until its collapse in early October 2008. A repeated pattern is evident – this ratio would gradually approach the 5% limit, where by law the stake would have to be flagged, and then drop suddenly, as buyers were found for excess shares. Behind each such drop is a deal in which a portion of shares is offloaded outside the stock exchange, almost always covertly. Full information on how the deals behind each drop were financed is not publicly available, but there is evidence, provided by Iceland’s Special Investigation Commission, that many of them were financed by Kaupthing itself (Special Investigation Commission 2010).

Figure 1 Kaupthing’s ownership of own shares 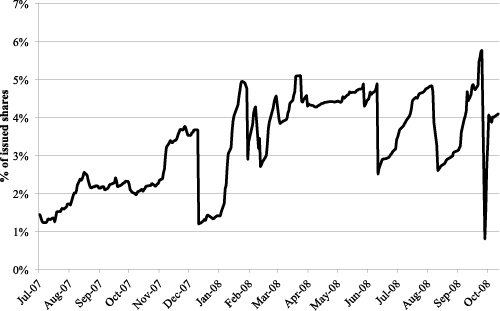 The al-Thani deal lies behind the last and largest drop in Figure 1. It is also the only instance where such a deal was made public. Indeed, by exceeding 5% of issued shares it was designed to trigger an announcement. Nevertheless, it is only a part of a larger picture where the bank repeatedly lent large sums of money for the purpose of buying its own shares with the only security being the shares themselves. Why was the bank driven to such a reckless and fraudulent strategy? The key to the answer is in Figure 2, which shows Kaupthing’s buying and selling of its own shares on the Icelandic stock exchange along with its share price.1

Figure 2 Kaupthing’s trading in its own shares on ICEX 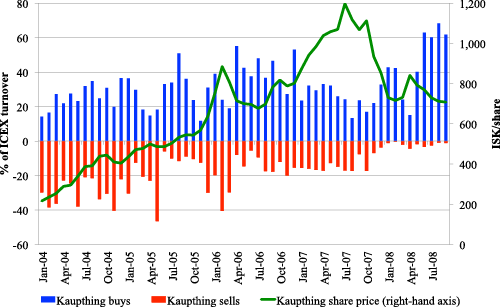 Throughout the period shown in Figure 2, Kaupthing was a very active trader in its own shares and was, on average, behind a third of all purchases of its stock in each month. Starting from mid-2005 there is a tendency for more buying than selling. Comparing Kaupthing’s share price with trading volumes, it is evident that buying of own shares became more pronounced when the share price came under pressure. This pattern can be observed during the mini-crisis of early 2006. From November 2007, however, Kaupthing was almost always on the buying side with negligible sales on the stock exchange. In the last four months of its existence (June–September 2008), Kaupthing was the buyer in over 60% of all purchases of its own stock.

From November 2007 to September 2008 Kaupthing bought on average 1.5% of its outstanding stock each month on the exchange, but sold only 0.1%. Such unbalanced trading could clearly not go on for long without Kaupthing selling some of the shares as shown earlier. Otherwise, Kaupthing would soon have had to flag its own position on the stock exchange, thereby attracting unfavourable attention from market participants and regulators. Moreover, top management at Kaupthing had large stakes in the bank – to a large extent debt-financed – and therefore had a strong personal interest in supporting its share price. 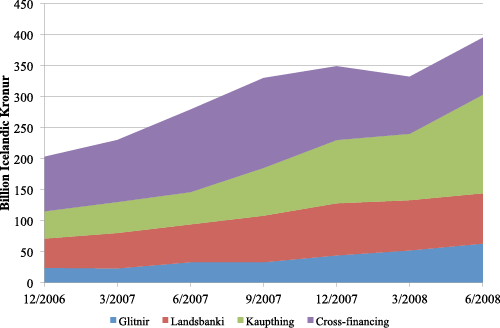 Although patterns vary somewhat among the banks, a similar development took place at the other two failed large Icelandic banks, Landsbanki and Glitnir.2 As shown in Figure 3, financing of banks’ own shares increased continuously from end-2006 to mid-2008 at all banks, but most drastically at Kaupthing, where there was a near quadrupling of loans for this purpose. Overall, the financing of own shares increased from 12% of capital to 26% at mid-2008 – most of the increase taking place from September 2007 onwards, when the pressure on the banks rose. Neither the stock exchange nor the Icelandic Financial Services Authority seems to have investigated the extent to which the banks supported their own share prices.

Another large factor in the deterioration of the banks’ balance sheets during the last year of their life was extensive refinancing of investments of their owners and other big borrowers. This too was part of the big gamble.

Glitnir’s lending to its main owner, a holding company called Baugur Group, and related parties is the most important example of such lending. Lending to Baugur started to rise rapidly from a level of about 40% of Glitnir’s capital base at the beginning of September 2007 – right at the outset of the international financial crisis and a few months after Baugur Group became the controlling shareholder of Glitnir – and reached a peak of 85% in March 2008 (Figure 4).3 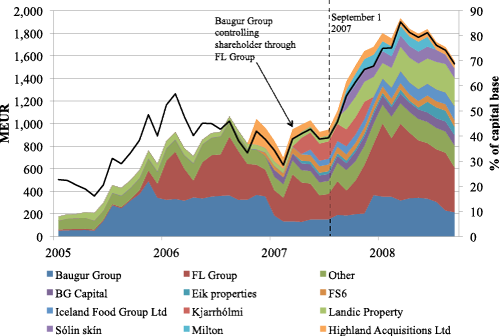 Lending to Baugur Group at Glitnir constitutes an extreme case. Similar lending to owners and related parties took place at all the banks. But at no other bank did this reach such heights. The group of firms of which Baugur was the centre did, however, borrow heavily from all three major banks, and they were all exposed to Baugur Group to an extent well above the regulatory maximum of 25%. At its peak in December 2007, combined lending at the three banks to Baugur Group and related parties amounted to over €5.5 billion. For comparison, the capital base of the three large banks at the end of 2007 as well as the 2007 GDP of Iceland was approximately €14 billion.4

To some extent these high exposure ratios are a consequence of the definition of ‘related parties’ used by Special Investigation Commission (2010) and in Figure 4, where two parties are defined to be related when one party owns, directly or indirectly, at least 20% of the other. The Financial Services Authority, however, did not lay down a precise rule on how it defined related parties. Instead it relied on the qualitative EU definition, which does not set any numerical threshold in terms of ownership for parties to be related. As a result of this ambiguity, it appears that defining related (connected) parties for the purposes of large exposure decisions was to a considerable extent at the discretion of each bank. When the Financial Services Authority tried to intervene it met strong resistance from the banks. So enforcement of regulation on large exposures was very weak.

With the financial turmoil that began in August 2007, the banks’ access to capital markets was curtailed. They then gambled on resurrection, expanding their balance sheets and refinancing the investments of their owners and other big borrowers, while they should have been deleveraging and securing their liquidity positions in foreign currency. The banks also prevented their share prices from collapsing by purchases of their own shares in the stock market, offloading accumulated shares in private deals, usually financed by themselves. All this went on apparently unnoticed by regulators. The Icelandic banks did not buy toxic securities – but together, they administered their own potent mix of systemic poison.

The Icelandic banks were too big to fail, but too big for the state to rescue. So they did fail, with devastating systemic consequences in Iceland, though the international effects were small relative to the simultaneous global crisis. The Icelandic bankers are paying a personal price, more than financial, as some others have in the past (e.g. many officials of US ‘thrifts’ in the 1980s). But elsewhere, there have been no high-profile prosecutions of individual executives of financial institutions that failed or were bailed out in the 2008 crisis. In this regard, Iceland may seem a special case played out in a tiny country. But as a classic case of gambling for resurrection, for which we now have detailed evidence, the lessons of the rise and fall of the Icelandic banks are very general indeed.

1 Apart from Kaupthing’s share price, these and other data in this column first became publicly available with the publication of Special Investigation Commission (2010).
2 In March 2013 the CEO and five other executives from Landsbanki were indicted for market abuse (Financial Times 2013a).
3 Special Investigation Commission (2010) documents pressure by Glitnir’s owners to direct increased lending to themselves and their own companies.
4 Converted into euros at the ISK/€ exchange rate on 31 December 2007.