Rich people typically lean right politically. Are they motivated by deeply moral views or self-interest? This column argues that money makes you right-wing. It shows that lottery winners in the UK are more likely to switch their allegiance from left to right.

Why are you right-wing, left-wing, or in the middle? You probably believe that you made a genuine, calm, and ethical choice. But what were the deep causal forces upon those political preferences?

The scientific roots of people’s political views are poorly understood. One possibility (View 1) is that individuals’ attitudes to politics and redistribution are motivated by deeply moral views. Another possibility (View 2) – and this is perhaps some economists’ presumption — is that voting choices are made out of self-interest and then come to be embroidered in the mind with a form of moral rhetoric. Testing between these two alternative theories is important intellectually. It is also inherently difficult. That is because so many of our attitudes as humans could stem from early in life and are close to being, in the eyes of the researcher, a ‘person fixed-effect’.

In most data sets, rich people typically lean right. The fact that high income and right-wing views are positively correlated in a cross-section has been repeatedly documented in quantitative social science (recently, for example, by Brooks and Brady 1999 and Gelman et al. 2007 in US data, and by Evans and Tilley 2012 in British data). An analogous result is reported, using quite different kinds of methods, in Karabarbounis (2011). Economists such as Di Tella and MacCulloch (2005) have also studied political views and their implications, and other influences have been examined using causal evidence on political views (such as in Oswald and Powdthavee 2010 and Erikson and Stoker 2011).

Fine – so the rich favour the right not the left. The difficulty is to know how to interpret this famous correlation of political science. Is it actually cause-and-effect, and if so in what direction? It would be nice to run a real randomised experiment where a treatment group are showered with cash, but that would be too expensive for social-science funding agencies. Hence it is necessary to look elsewhere for inspiration.
New Evidence from the Lottery
Our new study, Powdthavee and Oswald (2014), tries to get to the bottom of the issue. By looking at lottery winners through time, it provides longitudinal evidence consistent with the second, and some might argue more jaundiced, view, namely the View 2 of human beings. We exploit a panel data set in which people’s political attitudes are recorded annually. Our work builds upon an interesting cross-sectional examination by Doherty et al. (2007), which we learned about late in our own research.

In our data set, many hundreds of individuals serendipitously receive significant lottery windfalls. We find that the larger is their lottery win, the greater is that person’s subsequent tendency, after controlling for other influences, to switch their political views from left to right. We also provide evidence that lottery winners are more sympathetic to the belief that ordinary people ‘already get a fair share of society’s wealth’.

We are able to observe people before and after a win. Access to longitudinal information gives us advantages denied to most previous researchers on this topic. One reason this is important is because it seems plausible that personality might determine both the number of lottery tickets bought and the political attitudes of the person, and this might thereby lead to a possible spurious association between winning and right-leaning views. We provide, among other kinds of evidence, a simple graphical demonstration that winners disproportionately lean to the right having previously not been right-wing supporters.

The formal study draws upon a nationally representative sample from the British population. In our regression equations we focus particularly upon a sub-sample of people (a fairly large proportion, given the lottery’s popularity in the UK) who have ever had a lottery win. Within this group, we are especially interested in the observed longitudinal changes in political allegiance of the bigger winners compared to the smaller winners. Our key information stems from 541 observations on lottery wins larger than £500 and up to approximately £200,000. Figure 1 gives a flavour of our results; fixed-effects equations are given in the formal paper and have more tightly defined error bars.

Figure 1. Evidence on switchers: The percentage of people who switched right (conservative), and previously did not vote conservative, after a lottery win 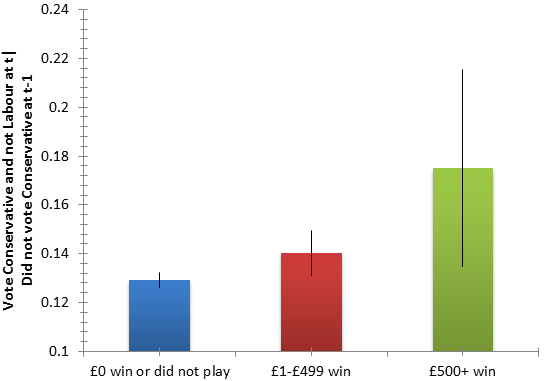 The consequences of winning even a modest sum of money are fairly large – certainly a number of percentage points extra on your chances of favouring a Mrs Thatcher or a Ronald Regan. Thus money makes people right-wing and inegalitarian. Perhaps even you.