Yves here. Now we learn one of the reasons Germans are so keen to punish periphery countries. Germans don’t get enough retail therapy!

Not that 2013 was such a great year in Germany, economically speaking, with growth stalling out at a measly 0.4%, barely above the dreaded zero line. But it was a great year, nay, superb year, for extracting taxes from hard-working people. Tax collections by the Federal Government and the Länder (states), according to the Ministry of Finance, rose a combined 3.3% (in a stalling economy!) to €570.2 billion, the highest ever.

Corporations got off easy: After years of “tax reform,” the coddled German multinationals, and maybe even the Mittelstand – those closely-held global niche players that are the official pride of Germany – had apparently soaring profits, and corporate income tax revenues soared in parallel 15.2% to … drumroll … €19.5 billion. A mere 3.4% of all taxes collected! OK, they also faced other taxes, about which they have been complaining vociferously for years, including their share of €39.4 billion in energy tax, €7 billion in electricity tax, and €1.2 billion in nuclear fuels tax.

Consumers got whacked: revenues from the Value Added Tax (VAT) hit €196.8 billion – ten times the amount of corporate income taxes, and by far the largest component of all taxes. Individual income taxes jumped 6.1% to €158.2 billion – the second largest component. Workers also paid €14.4 billion in Solidarity Surcharge – a “temporary” tax to fund the bailout of East Germany after Reunification. They paid special taxes on tobacco, spirits, beer, and coffee. They paid taxes on motor vehicles. They paid big-fat taxes on energy. They paid taxes on income and consumption until they croaked.

So this shouldn’t have come as a surprise: Last year, the ECB finished up a Eurozone-wide household-wealth survey, but when the Bundesbank refused to publish the German data, insiders leaked the reason: too explosive! Apparently, Italian households were far wealthier than German households. Shocking! But the truth, when it was finally published, turned out to be far more shocking. Read… Total Fiasco: Germans are the Poorest, Cypriots the Second Richest in The Eurozone

German consumers have been croaking for years under the suffocating tax burden. What gives? Retail sales. Despite current surveys that somehow prove beyond doubt that consumers are feeling flush with optimism, they stubbornly refuse to express this optimism with their wallets – and wallets don’t lie.

I have seen the word “shock” in the US to describe the debacle: German retail sales in December fell 2.5% from November (seasonally adjusted). It should have been an up month. It should have ended the drab year on a positive note. But it didn’t.

Retail sales were 2.4% lower than in December 2012, which had already been a very lousy month. The normal calendar excuse that there were fewer selling days didn’t apply this time as both Decembers had 24 selling days. And so for the year 2013 as a whole, retail sales adjusted for inflation inched up 0.1%, a mere rounding error, in an economy that was supposed to be booming. And they were down 3.6% from … drumroll again … 1995!

In our world where consumerism reigns, where you shop till you drop, Germany experienced nearly two decades of retail quagmire. And this is what it looks like: a sadly drooping zigzag line – one of the most unusual long-term retail charts in the world, or perhaps the only one. 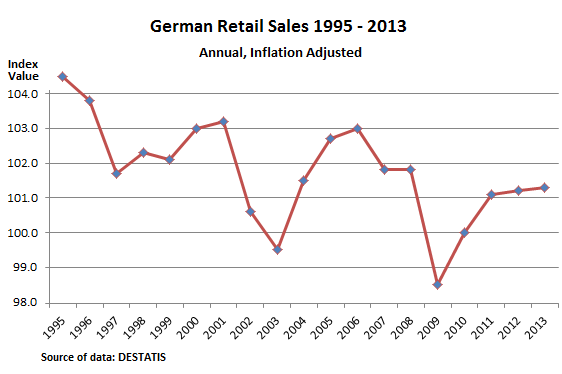 Somebody has to pay the price for the official government policy that every administration, regardless of hue, has to adhere to: maximize exports no matter what the costs or risks. And it certainly isn’t “Germany AG,” the powerful fusion of large corporations, that is being asked to step up to the plate. As real wages and benefits have been whittled down over the last 20 years, and as taxes on workers and consumers have been raised incessantly and in a myriad nifty ways, while they have been lowered on corporations, it’s clear who pays the price. And these strung-out folks simply don’t have a lot of money to spend.

Since 2012, German economic growth has been back where it was when Germany was called the “Sick Man of Europe.” Only this time, Germany has been anointed the model economy for others to follow and admire, and its stock market has defied gravity. Read…. German Economy Wobbles Between Shrinkage And Stagnation