Lambert here: NC has flagged this risk before: As global warming progresses, the melting of polar and Greenland ice will lower ocean salinity, which will slow or stop the Gulf Stream, on which Europe depends for its temperate, relatively mild climate. The Pacific Northwest, which benefits from a less pronounced gulf stream effect, is also at risk.

By Gaius Publius, a professional writer living on the West Coast of the United States and contributing editor at AmericaBlog. Follow him on Twitter @Gaius_Publius and Facebook. Originally published at AmericaBlog

But there’s no reason to assume that there won’t be sudden collapses as well, sudden discontinuities, the way a steady dribble of small chunks of ice might fall from a Greenland glacier into the sea, then suddenly a piece the size of Ohio splits and floats away, lost, never to come back. A discontinuity, a break from the gradual.

Discontinuities work in the social sphere as well, in the sphere of confidence and panic. As I’ll show you shortly, the first major (white) American city to end its life forever following a Haiyan-sized hurricane — Miami, for example — will cause a collapse in American confidence in the future that will never return. That loss of confidence and the panic that will result is a collapse as well, a discontinuity, fear the size of Ohio breaking the population from its safe assumptions and presumed security.

Here’s another discontinuity. The Gulf Stream, the warm-water current that starts in the Gulf of Mexico and terminates in the Atlantic north of Scotland, also has collapse potential. Because of the Gulf Stream, northern Europe is moderate in climate. What if the Gulf Stream collapses and stops warming Europe? (To jump to the bottom line, click here. But you’ll be missing some interesting graphics.)

What is the Gulf Stream?

What’s the Gulf Stream and where does it flow? Here’s a look at surface temperature in the western North Atlantic, from Wikipedia: 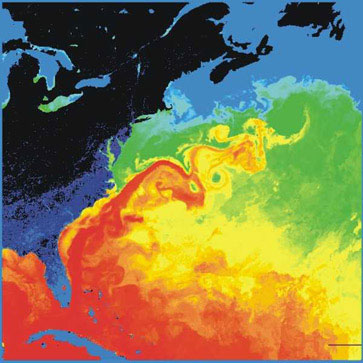 Study the graphic by first finding North America on the left, and the coasts of Florida and Cuba. The rest is water, of varying temperatures. Note the suggestion of a current traveling north. The Gulf Stream is, in fact, an actual plottable current, like a river within the ocean, that carries warm water from west of Florida — yes, west — through the water that divides Florida from Cuba and into the North Atlantic.

The following is also from Wikipedia; note that the Gulf Stream splits at some point and warms both Europe and West Africa.

The Gulf Stream, together with its northern extension towards Europe, the North Atlantic Drift, is a powerful, warm, and swift Atlantic ocean current that originates at the tip of Florida, and follows the eastern coastlines of the United States and Newfoundland before crossing the Atlantic Ocean. The process of western intensification causes the Gulf Stream to be a northward accelerating current off the east coast of North America. At about 40°0′N 30°0′W, it splits in two, with the northern stream crossing to Northern Europe and the southern stream recirculating off West Africa. The Gulf Stream influences the climate of the east coast of North America from Florida to Newfoundland, and the west coast of Europe. Although there has been recent debate, there is consensus that the climate of Western Europe and Northern Europe is warmer than it would otherwise be due to the North Atlantic drift, one of the branches from the tail of the Gulf Stream.

Again from Wikipedia, here’s the same image as the one above, with Europe and Africa shown, as well as the Gulf Stream itself. Click to see a very large and detailed version of this image. 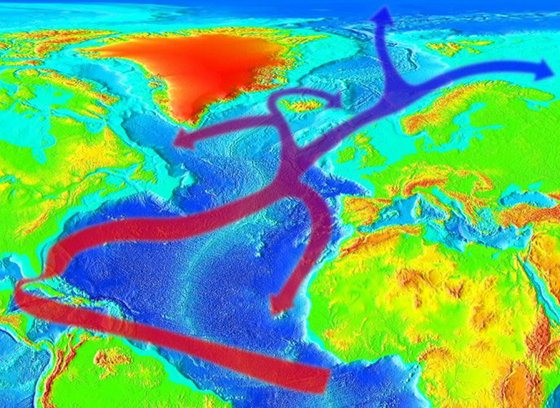 To orient yourself, start by finding the North American coast, then locate Spain and the British Isles. Then click to study the image if you like (it opens in a new tab). Keep Scotland in mind as you watch the video below — the unnaturally warm western Scottish climate puts in a surprising early appearance in the program.

The Gulf Stream isn’t a one-way flow; it’s a loop with an underwater return

What’s not apparent from the images above, nor from the Wikipedia link, is that the Gulf Stream is a loop, not a one-way water flow.

As you’ll see in a minute, the current holds together as a “stream” because it’s both more salty (thus more dense) and more warm (thus staying on the surface) as it is driven north by the Trade Winds. When the Gulf Stream stops being more warm — because it’s now further north and has given up its heat to the air and the ocean — it’s still more salty (still more dense) than the Atlantic water around it, so the salt current sinks to the ocean floor, still as a current, and returns south as part of a giant chain of surface and submerged oceanic currents.

At some point the global underwater currents warm, rise to the surface, enter the Gulf of Mexico and repeat the cycle. You can see the Gulf Stream part of this in the following three stills from the video’s animation. The first image shows the surface Gulf Stream current (taken from about 12:00 in the video). Note the cooler water entering the Gulf from the south, being warmed, and then driven north. 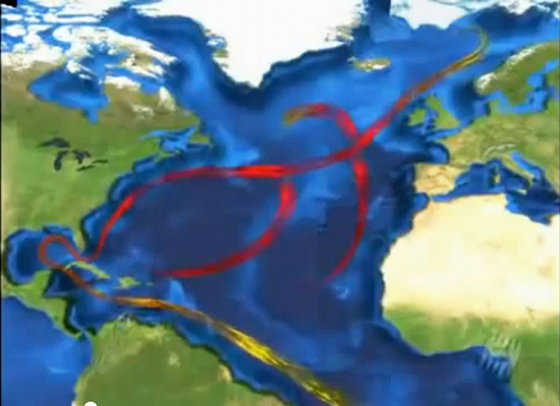 The second still image shows the start of the underwater return current along the floor of the Atlantic (12:45 in the video). The view is from underwater. The cooler, but still dense and saltier, light blue stream is now diving to the bottom, having given up its heat. The “cliff edges” you see in the background are the underwater portions of Norway and the British Isles: 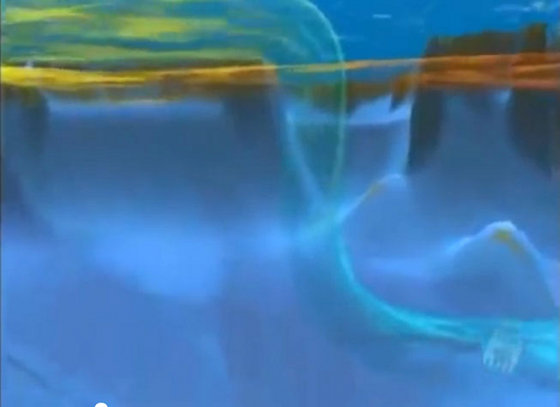 And here’s that dense salt water, “thermohaline circulation,” returning south along the Atlantic floor. The red images near the top of the graphic are warm surface currents flowing north, toward the “camera.” The lighter blue current near the bottom of the image shows the “return flow” as it moves south and away from the camera. 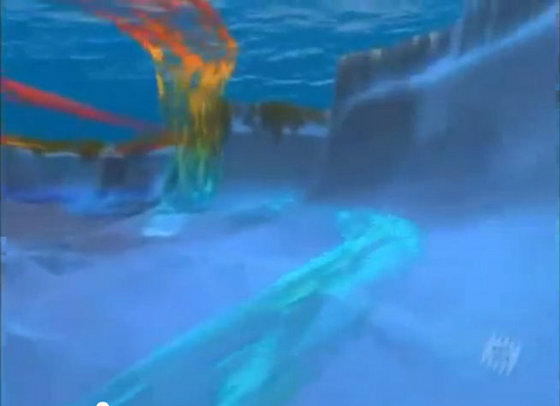 There’s more about the global thermohaline circulation here, along with a nice map and a NASA-produced video (if you watch, be sure to full-screen the animation).

So what would happen, do you think, if the Gulf Stream part of the global mid-ocean circulation stopped, was interrupted? That’s what this video is about.

The Gulf Stream and the Next Ice Age

This video considers the Gulf Stream, what it is, how it works, what drives it, and what happens when it’s interfered with, as it appears to have been in the past. The program is well produced — a NOVA-quality production — but to my knowledge has never been broadcast in the U.S. It appears to be a co-production of a U.K. video house and a French one.

Please watch, and if you like it, watch a second time, perhaps in the evening using your Chromecast or whatever. (When the video starts, click the “gear” icon to turn off annotations and increase the resolution.)

Here’s a quick rundown of the show’s main sections to help you navigate:

(Start) A vision of frozen Europe, then after the titles, an exploration of the effects of the Gulf Stream on the climate of western Europe, starting with Brittany and Scotland. (The Scottish segment at 5:30 is striking — Australo-Asian plants? Really?)

(7:30) Information about the Gulf Stream itself, starting with its discovery by Ben Franklin. The animation in this section provided most of the still images in this piece.

(13:25) Effect of the Gulf Stream on the availability of marine life for fishing and food supplies, especially cod.

(18:20) A discussion of the science — how the Gulf Stream could be interrupted and a look at paleo-climate. Core samples show there’s evidence of just this kind of interruption in the past 20,000 years.

(26:00) The bottom-line explanation — sudden influx of much fresh water from melting glaciers dilutes the high-density saltiness of the Gulf Stream and dissipates it in the surrounding fresh water. This prevents the stream from sinking and returning as a stream. The return flow from the North Atlantic stops and the return starts much further south.

(29:30) Information about global warming itself — where we are and where we’re going.

(39:30) Report of a Pentagon paper that warns in detail about the destabilizing effects of global warming, region by region.

Finally, a view of the animation showing Europe with the northern part of the Gulf Stream switched off. The extent of the glaciation (down to just before the Pyrenees) is not a guess. (To orient yourself, find Spain near the bottom, then look north to find the British Isles.) 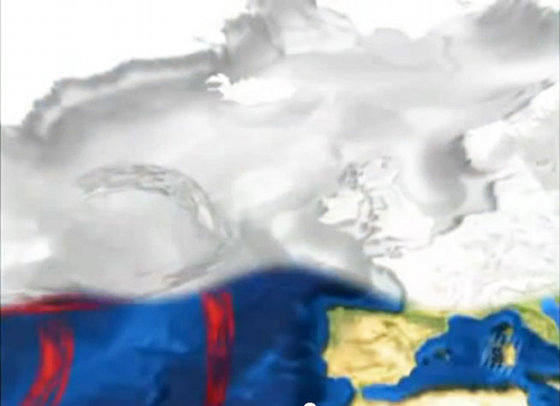 Dramatic? These cooling events have occurred before, often starting suddenly from periods of warming, lasting as little as a few decades, then reversing. The cause of sudden glaciers in Europe following periods of warming is still being discussed. But the interruption of the natural Gulf Stream flow one of the most likely candidates.

How does this relate to today?

It is believed that this dynamic, sudden glaciation of Europe, happens as a result of a global warming event that melts enough fresh-water ice in the north Atlantic to desalinate (dilute the dense salt content of) the surface part of the northern Gulf Stream. Because the surface current is no longer heavier than the surrounding ocean, it fails to sink when cooled. This causes the surface current to terminate further south than before, never reaching Europe.

Whatever that future is, our ability to be “civilized” in the modern sense depends on our ability to farm. Prior to studying the Gulf Stream, I had assumed that many major farming regions would be lost to heat, monsoon, flooding or drought, but that many growing regions would be preserved. The regions lost would include the California Central Valley, much of the American Midwest, the Northern Plain of China (its breadbasket), Ukraine (another breadbasket), almost all of Africa, most of India, and so on.

But I had also assumed that areas near or north of latitude 45°N (roughly Portland, Oregon, and Paris, France, etc.) were far enough north to remain or even improve as growing regions. These would include much of Canada, much of Europe, and all of Scandinavia. But glaciers in Europe, despite warming elsewhere on the planet, would make almost the entire north European continent unfarmable. Is northern Russia farmable today? I don’t think so, but research will tell us for sure.

Bottom line: The future may not be the ride we want it to be. Is it time to consider initiating a Zero Carbon regime voluntarily and interrupting most of the worst of these consequences? I still think we have a 5–10 year window.

If this stuff concerns you, tell everyone you know that Zero Carbon Now is the way out — and the only one. Education is our first task at this point, since the other side is selling us hard the wrong way. ”Carbon neutral” is just another trick for keeping David Koch in walking money. Even “lying pantsuit lady” — the Exxon spokeswoman — probably knows that. After all, she’s cashing those checks too; just smaller ones.