Some people often ask why I complain about Krugman. “Hey Phil, Krugman is a good guy. He likes government spending. You like government spending. Therefore you must like Krugman,” says our budding young Socrates. Well, I’ll tell you why: because Krugman is a pretty awful economist who pushes completely outdated views and tricks people into thinking that they’re cutting edge. Anything that is of interest he poaches from elsewhere, typically engages in dubious accreditation and ultimately gets it wrong.

The reason for this? Because Krugman loves models and hates books. He loves little simplifications of the world and hates complexity. That is why he has been wrong on most substantive issues over most of his career. What are the roots of this hatred? From his public writings it appears to have something to do with the influence of JK Galbraith and American institutional economics (which, in Krugman’s mind, is tied up with all heterodox economics).

In the mid-1990s Krugman used to write awful reviews of Galbraith’s books. The motivation appears to have been to consign the true economic progressivism and eclecticism that Galbraith represented to the bin and promote a new type of thick-skinned liberal of the type that Krugman saw himself to be. In his review he wrote,

The truth is that constructing and maintaining a good society has turned out to be far more difficult than anyone imagined a generation ago. To be a serious liberal, one must confront that difficulty, make hard choices, and persuade others to do the same. It is therefore a cause for sadness that America’s most famous liberal economist has produced a manifesto that simply assumes most of the difficulties away.

This was the 1990s, of course; in the middle of the era of Clinton and all that. While heterodox economists were warning about income inequality and the dangers of running a fiscal surplus and a trade deficit at the same type (by identity this means rising private sector debt), Krugman was proclaiming that the welfare state in Europe was causing the unemployment there and that, well, Pete Peterson might have a point about cutting social security. That is what being a ‘serious liberal’ meant to Krugman in the 1990s and attacking heterodox economics — which he associated with institutional economics — was his way of promoting his creed.

Yesterday, Krugman discussed the always excellent Lars Syll’s criticisms of the ISLM and the old demons bubbled up once more to the surface. He claims that Syll is promoting some sort of model-free institutional economics. He gives a tired (and incorrect) little history of American economics that basically says that while the institutionalists were fumbling in the Great Depression, Paul Samuelson delivered the country from evil with his neo-Keynesian doctrine.

Actually, the real history is much more complicated and involves a textbook by Lorie Tarshis that was rejected due to a right-wing conspiracy launched by William F. Buckley and a massive war that allowed for budget deficits. Samuelson had very little to do with any of this history. But he was the one who succeeded in popularising neo-Keynesian economics to students in the 1960s (while losing debates against the real Keynesians at Cambrige, UK…).

Anyway, back to ISLM. Krugman’s main contention is that while us silly heterodox types are fumbling with our clumsy ‘institutionalism’ Paul Krugman and his ‘serious liberal’ friends are taking a hard-headed view of the world and calling for fiscal stimulus. What’s more, he’s utilising the ISLM framework and, according to him, the ISLM framework makes True predictions about the world. He writes,

You see that a lot among people who reject IS-LM as too simple and unsubtle: what they have ended up doing in practice, for the most part, is predicting soaring inflation and interest rates, because whether they know it or not they have effectively reverted to crude quantity-theory and loanable-funds models.

Meanwhile, those of us working with IS-LM, and arguing that we had entered a liquidity trap, predicted little effect from the Fed’s balance sheet expansion, certainly not an explosion of inflation; low interest rates despite government borrowing; severe adverse effects from austerity. And we were right – because in reality, using a “silly” little model is a lot more sophisticated than talking grandly about complexity, and then trying to make diagnoses with no explicit model at all.

Okay, apparently the two alternatives are (i) worship ISLM or (ii) predict soaring inflation and interest rates. I don’t know who Krugman is writing for these days but only the most ignorant idiot with no interest in economics and no access to the internet could believe such preposterous tripe. But given that Krugman thinks that his little ISLM is such a great predictor let’s see how it fared when he applied it in what he would call a non-liquidity trap environment.

Back in 2003 Krugman saw George W. Bush run up large fiscal deficits to fund the war. While most heterodox economists were reluctantly saying that this bout of Military Keynesianism would buttress a US economy greatly weakened by the dot-com crash a few years before, what was Krugman and his little toy models telling his readers? Well, in an article entitled A Fiscal Train Wreck he was telling them that interest rates would soar and there would be a fiscal crisis.

With war looming, it’s time to be prepared. So last week I switched to a fixed-rate mortgage. It means higher monthly payments, but I’m terrified about what will happen to interest rates once financial markets wake up to the implications of skyrocketing budget deficits.

From a fiscal point of view the impending war is a lose-lose proposition. If it goes badly, the resulting mess will be a disaster for the budget. If it goes well, administration officials have made it clear that they will use any bump in the polls to ram through more big tax cuts, which will also be a disaster for the budget. Either way, the tide of red ink will keep on rising.

Whoops! In March 2003 Krugman was calling for mortgage rates to rise… just at the beginning of what would turn out to be the biggest housing bubble in US history. What actually happened? Mortgage rates basically flat-lined for the next 5 years. 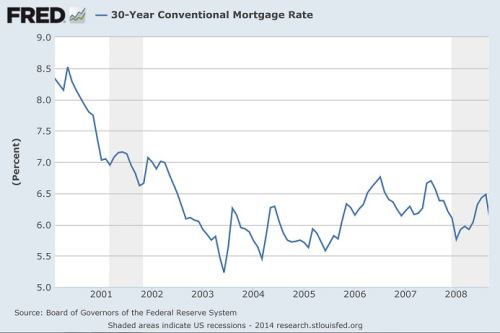 Of course, rising interest rates were precisely what his little ISLM model told him would happen. He figured that since the economy was not in what he calls a ‘liquidity trap’ then a rise in the budget deficit would lead to a rise in interest rates across the board.

But the heterodox types were more focused on the fall-off in demand that had occurred three years earlier and the rising private sector debt that was starting to fill in the gap. This, together with the Iraq War, were what was going to drive the economy forward in the next few years. They were not concerned with interest rates rising because they knew that the Fed ultimately sets interest rates and that money is endogenous.

From 1997 to the peak in 2000, business nonresidential fixed investment rose by around $300bn 1996 dollars, a gain of about 2 percent in relation to GDP, or from 12.2 to 14.4 percent. Most of the gain was technology investment. In the two years after the peak, the falloff was on the order of $150bn. The entire falloff in business investment was then replaced by the increase in the military budget put in place by the Bush administration following the terrorist attacks on September 11, 2001, and the invasion of Iraq in 2003. As a result the US economy returned to nearly full-strength by mid-2006, and once again the stock market recovered. (p100)

So, what is the lesson here? Simple. The ISLM is a crappy tool for understanding the economy. Krugman is not a very good forecaster and is more often wrong than right (a broken clock and all that…). And what Krugman thinks to be ‘institutionalism’ (i.e. heterodox economics) is a far better paradigm if you want a realistic view of macroeconomics. If you want to learn outdated and oversimplified rot while playing at being a ‘serious’ and ‘hard-nosed’ liberal read Krugman; if you want to gain interesting perspectives on economics and fight for true progressivism read Syll and Galbraith.