Yves here. I suggest skeptics listen to the video at the end of this post and ponder the implication of Mann’s discussion of plankton.

When will the global warming process, and all the damage it does, get out of control? This question is obviously the focus of considerable debate.

Lately the writing and thought of Guy McPherson is causing some controversy among climate thinkers and writers. McPherson’s predictions are at the extreme edge of cataclysm. For some of what McPherson is saying, scroll to the bottom of this piece and listen to the interview. The interviewer is Thom Hartmann, on his nightly TV show “The Big Picture”.

McPherson sees runaway global warming in this century due to a massive methane emission from the Arctic, especially Siberia, with warming even greater and faster (both degree and speed) far beyond what even I’ve been talking about. (For some background on methane as a greenhouse gas, go here.)

As I said, there has been some discussion of McPherson among climate writers thanks to the Hartmann interview. Which has led many of us to consider a recent piece, published in the mainstream Scientific American, by Dr. Michael Mann. Mann is famous, against his will, for first having produced the Hockey Stick diagram, and then for being attacked verbally by deniers, and legally by Virginia AG Ken Cuccinelli, for his climate views.

This piece is adapted from something I contributed to one of those climate discussions. After it was noted that other climate scientists thought McPherson may be wrong on some of the science, the discussion turned to Mann’s article. (The issue with McPherson’s hypothesis, in part, involves the temperature and pressure conditions under which deep-underwater methane “ice” could convert to a gas in large enough quantities to cause the runaway effect, though other objections are raised as well. [Update: Do I disagree with McPherson? Too early to say. I haven’t yet given it the study it deserves.])

Mann’s article itself is here, and it’s very well-written — not at all science-speak. Key to his piece is this diagram and its text. I’m including it below in a small version. If you click, a much larger and very readable version will open in a new tab. 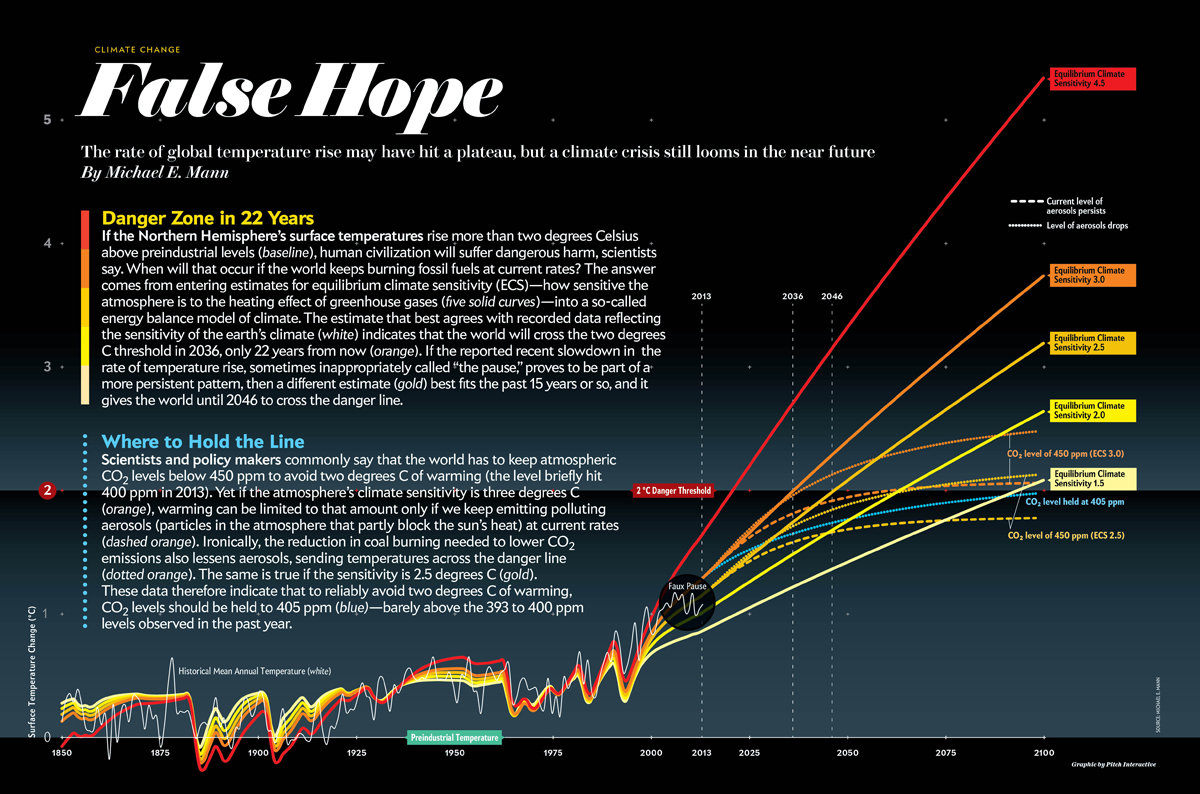 The various colored lines model various “sensitivities” of global surface temperature to increased carbon emissions. The Orange line, for example, says that if we double carbon emissions (in ppm of CO2) from pre-Industrial times, the surface will warm +3°C before it stabilizes — i.e., the climate is +3°C “sensitive” to doubling of CO2 ppm. But the climate might be less sensitive (responsive), or more. Other scenarios in the chart show a “sensitivity” of as little as +1.5°C to ppm doubling (pale Ivory line), through other sensitivities to as much as +4.5°C (Red line).

The chart and article then discuss which “sensitivity” is the most likely one, and what the timing implications of that are. (Hint: Mann says the data supports the Orange line, a 3°C sensitivity, but with some caveats as expressed in the article. I’ll address those shortly.) Obviously, if climate sensitivity turns out to be higher than that, warming happens faster and sooner.

These data therefore indicate that to reliably avoid two degrees C of warming [above pre-Industrial levels], CO2 levels should be held to 405 ppm (blue [line]) — barely above the 393 to 400 ppm levels observed in the past year.

In other words, if Mann is right — not just McPherson, Mann — we still need a Manhattan Project–style conversion-and-austerity regime now, not sometime the future. I personally don’t see a reason not to be saying that clearly and often. (I’m calling that a voluntary, high-speed “Zero Carbon economy” for ease of reference.)

Bottom line — Whether you agree with McPherson or not, even more mainstream scientists like Dr. Mann think that Stop Now is the only sure way to stay under +2°C (Blue line on the chart), and it will do that only barely. There’s no reason to say anything else.

One more thing. Though the article itself references the following idea, I’d like to give it more emphasis. It’s important to recognize the “in the pipeline” number as well as the “on the ground” number, since “in the pipeline” implies inevitability.

As a rough estimate, I put the current on-the-ground warming number at +1°C above the pre-Industrial norm (Mann agreed when I put this to him, and the chart shows this, even with the cleverly named “faux pause” factored in). To me, this says that, roughly, there’s another +1°C already “in the pipeline,” for a guaranteed total of +2°C, even under a “stop now” regime. Check the Blue line in the year 2100 on Mann’s chart for confirmation of his thinking.

Now the timing. Mann’s chart puts +2°C “on the ground” in the 2030s in his Orange sensitivity scenario (look for the orange line), or at higher sensitivity, in the early 2020s (Red line). Because I think that things are accelerating (forecasts tend to be “wrong to the slow side“); that the deep ocean will stop holding heat (or burp some of it back during El Niños); and that there will inevitably be surprising surges, discontinuities from the gradual … I’m personally closer to his Red line timescale than his Orange one.

Rate of change aside, though, the problem is the “in the pipeline” number itself. Until the day we do stop — actually stop — the in-the-pipeline number also goes up with the on-the-ground number.

What if we haven’t stopped carbon emissions by 2020 (just a few years away) and we’re on Mann’s Orange timescale? The on-the-ground number in 2020 is roughly +1.5°C, and there’s every reason to think the in-the-pipeline number is at or near +3°C, coming in the 2050s.

And if we’re on the Red timeline, then in-the-pipeline +3°C shows up in the 2030s. Anyone who is 30 today would see that in their 50s. But by either timeline, what’s the in-the-pipeline number when there’s +3°C on the ground? Mann shows his 2100 projections as linear. Odds of that, in a world that’s mostly out of control, socially and politically? I think when +3°C is on the ground, the process runs to conclusion, meaning +7°C or higher.

Again, what’s the only possible solution? It’s not “carbon neutral” dithering. It’s Zero Carbon — just stop now — and saying so clearly and often. David Koch can fend for himself.

What Does Guy McPherson Say?

For completeness and for your consideration, here’s that interview with Guy McPherson done by Thom Hartmann. McPherson is as sincere as the rest of us. Feel free to judge for yourself how right or wrong he may be.