At least 40 central banks have invested in the yuan and several others are preparing to do so, putting the mainland currency on the path to reserve status even before full convertibility, Standard Chartered said.

Twenty-three countries have publicly declared their holdings in yuan, in either the onshore or offshore markets, yet the real number of participating central banks could be far more than that, said Jukka Pihlman, Standard Chartered’s Singapore-based global head of central banks and sovereign wealth funds.

Pihlman, who formerly worked at the International Monetary Fund advising central banks on asset-management issues, said at least 12 central banks had invested in yuan assets without declaring they had done so.

The US dollar is still the world’s most widely held reserve currency, accounting for nearly 33 per cent of global foreign exchange holdings at the end of last year, according to IMF data. That ratio has been declining since 2000, when 55 per cent of the world’s reserves were denominated in US dollars.

The IMF does not disclose the percentage of reserves held in yuan, but the emerging market countries’ share of reserves in “other currencies” has increased by almost 400 per cent since 2003, while that of developed nations grew 200 per cent, according to IMF data.

Pihlman said “a great number of central banks are in the process of adding [yuan] to their portfolios”.

“The [yuan] has effectively already become a de facto reserve currency because so many central banks have already invested in it,” he said.

There’s more than a little over-excitement here. The Chinese economy is the second largest in the world yet the central banks holding yuan don’t look much larger than those holding Australian dollars.

Besides, there is a quantum difference between central banks holding a few of your pennies and global markets pricing absolutely everything in relative terms off your currency. The US dollar still makes up one side of 90% of the world’s $700 trillion in over-the-counter forex, equity, commodity, interest rate and credit derivative transactions, making the yuan (and everything else) almost completely irrelevant.

A second point worth noting is that if you’re going to be a true reserve currency then you’re also going to have to run huge current account deficits, or there simply won’t be enough of your dough to go around. While the notion of 1.3 billion consumers going hog wild at the mall suggest such is possible in the future, with very low average incomes and entrenched savings habits, China has a long way to go before it’ll be chucking out enough yuan to satisfy that criteria.

While the next chart from JP Morgan will no doubt one day come true, it probably won’t be in my lifetime: 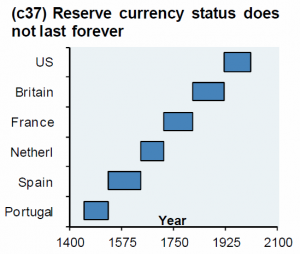