Before you get too excited about the notion that the SEC might actually be saddling up to Do Something about high frequency trading, the agency has roused itself to issue a leak….that it is pondering launching a limited trial to address all of one practice.

I’m not making this up. From the Wall Street Journal:

SEC officials, including some commissioners, are considering a trial program to curb fees and rebates they say can make trading overly complex and pose a conflict of interest for brokers handling trades on behalf of big investors such as mutual funds.

The trial program would eliminate maker-taker fees in a select number of stocks for a period to show how trading in those securities compares with similar stocks that keep the payment system. 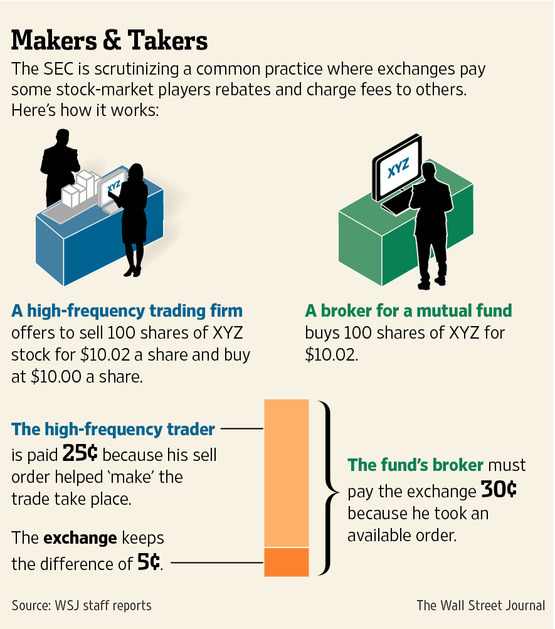 Now let us consider the rather awkward position the SEC finds itself in. It sat by as the NYSE and Nasdaq allowed HFT firms to co-locate servers so as to get advantaged access to orders. The exchanges were eager to play ball because the high frequency traders paid for this privilege. And the fig leaf is that while FINRA, Wall Street’s self regulatory body, has a rule against brokers front-running their clients, the high frequency traders aren’t acting as brokers. As the New York Times noted:

There is no small paradox in the stock exchanges profiting by selling access to information that can be used for something that looks an awful lot like front-running, while Finra enforces a rule prohibiting brokers from doing the same thing.

Now unless the high frequency tradingfuror dies down quickly (which it might, scandals can sometimes have a short half life), we are likely to have Congressional hearings and the SEC will have to explain itself.

The SEC is almost certain to contend that it not only does take l’affaire high frequency trading seriously, it’s been moving with all deliberate speed. As a Bloomberg story pointed out last week:

The SEC took its first deep dive into HFT in January 2010, before many other enforcement agencies had waded into the debate. As part of a broad review of market structure, it examined how brokers route the electronic orders of speed traders and questioned whether that put other investors at a disadvantage. The report elicited more than 400 comment letters from banks, exchanges, retail brokerages, and large institutional investment firms.

Yves here. Notice how all of nothing happened? That means the SEC ran into such a thicket of competing interests that it didn’t see an easy path forward. And mind you, later that year, the flash crash took place. But the SEC has yet to implement any measures to prevent a recurrence.

Now here is the beautiful part:

The problem is that the SEC doesn’t have all the data it needs. In 2012 the agency spent $2.5 million on a surveillance system named Midas (Market Information Data Analytics System) that collects information from all 13 public exchanges in the U.S. This essentially gives the SEC the same view of the market that many speed traders have. It doesn’t, however, give it a picture of the whole market. Only about 70 percent of trades happen on public exchanges; the rest take place offline, either inside large wholesale brokerages that match buy and sell orders internally or in private trading venues called dark pools. To see that activity, the SEC needs a much more powerful system that can track the life of every stock quote, order, and trade…

In 2010, White’s predecessor, Mary Schapiro, approved a project to build such a system to funnel terabytes of information every day into one massive feed that regulators could monitor. Called the consolidated audit trail (CAT), the system would allow the SEC to conduct detailed forensic analysis and weed out abuses. The contract for the huge project, which will cost more than $1 billion, still hasn’t been awarded. The SEC estimates that CAT won’t be finished until 2016.

One billion dollars? For a ginormous data feed to gather info on the 30% of the market the SEC does not see now? And given how most IT initiatives go, this “one data feed to rule them all” project could easily come in vastly over budget.

The SEC’s annual budget is $1.3 billion. As much as HFT is an important issue, this is a grossly disproportionate expenditures. As a management consultant, I’ve regularly had to do studies in OTC markets where we had access to only a teeny slice of market data compared to what the SEC had. You don’t need perfect information to make decisions. You can get it via sampling and qualitative assessments for an itty bitty fraction of this $1 billion price tag.

So what this really says is either the SEC is unwilling to act and is playing the Penelope game*, of making action dependent on a task that will never get done, or it is genuinely unwilling to walk into a political minefield, and so will make a proposal only if it has incontrovertible data. Needless to say, I’m leaning toward the first theory.

Now that isn’t to say that the practice the SEC has roused itself to take interest in is unimportant. The Wall Street Journal notes:

Fund managers and others concerned about the negative effects of maker-taker recently held a series of private meetings with SEC Chairman Mary Jo White and other staff members to push for its elimination, according to people familiar with the meetings. Among those who met with the SEC was Jeffrey Sprecher, chief executive of IntercontinentalExchange Group Inc., which owns the New York Stock Exchange; representatives from fund manager T. Rowe Price Group Inc; and representatives from RBC Capital Markets, a unit of the Royal Bank of Canada….

Maker-taker has come under a harsh spotlight in recent years, with big investment firms, academics and exchange executives saying it can hurt long-term investors and skew brokerage-firm incentives.

A primary criticism is that the fees pose a conflict for brokers, who might choose to route an investor’s order to an exchange with the goal of earning a payment, not to get the best deal for the client.

A recent study by finance professors Robert Battalio and Shane Corwin at the University of Notre Dame and Robert Jennings at Indiana University found stockbrokers appear to routinely route client orders to markets that provide the best payments. The study found that can saddle investors with worse results than if the brokers hadn’t factored in the payments, and that such trades are “unlikely to be consistent with the broker’s responsibility to obtain best execution” for investors.

Even so, the Journal stresses that White has only indicated she is sympathetic to the calls to eliminate maker-taker, but has not made any decision. And thinking about launching a trial looks a lot like a way to slow-walk any action.

So it looks like the SEC will have its pat answers if it is put under the Congressional hot lights: it takes all the public concerns seriously, it has been soliciting input from all the concerned parties. It’s even about to launch a project!

Don’t buy it. Remember, after the 1987 crash, President Reagan authorized a study within ten days and had an analysis and recommendations, know as the Brady Commission Report, two months later. The data gathering is admittedly more difficult due to the opaque nature of some of the market, but having no point of view on high frequency trading nearly four years after the flash crash should be seen as an indictment of the SEC’s seriousness and competence.

___
*Remember the wife of Odysseus held off her suitors by saying she’s marry one of them once she finished weaving a burial shroud for her father, which she unravels every night.