Recently Cameron Murray directed me to an interesting paper entitled Do Economists Recognize an Opportunity Cost When They See One? A Dismal Performance from the Dismal Science. The paper surveyed a whole bunch of professional economists to see if they could answer a basic question on the microeconomic theory of the ‘opportunity cost’.

The results were not so good. They are laid out in the table below — note that there is only one correct answer!

Most of the profession viewed this as some sort of failure of economic education. So too did Murray on his blog. But I’d like to put forward a different interpretation: what if the entire technical idea of opportunity cost is a load of rubbish?

What do I mean? Well, in order to get where I’m coming from take a look at the question that was asked. 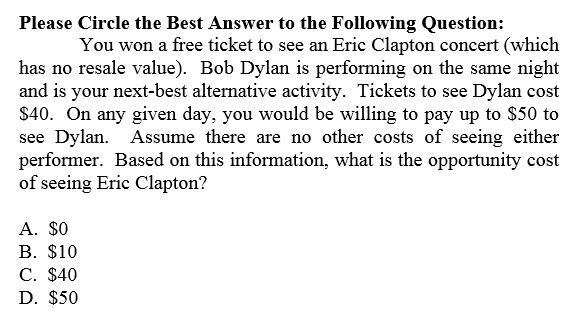 This, as we shall see, is a very particular way of measuring worth. Indeed, it is little more than an accounting trick based on a priori definitions (opportunity cost = potential utility – actual cost) that tells me nothing of substance about the subjective valuation. I can just as easily come up with a new accounting definition; this is entirely arbitrary.

So why do I say that the results prove the theory to be garbage? Well, because each question got somewhere around a 25% response rate. They seem to be, as the paper notes, basically randomly distributed.

And why does this imply that the theory is garbage? Because in microeconomic theory people are supposed to maximise their subjective utility. In order to do so they obviously have to be able to calculate the opportunity cost of forgone purchases. But if economists cannot even do this then why would we expect anyone else to do it?

This is not actually unreasonable. I can see how people could view this in different ways. I could say, for example, “well the Dylan ticket is worth $50 to me, so I’m giving up $50 worth of utility to go to the Clapton concert”. Indeed, according to the responses this seems to be what most of the economists thought.

Alternatively, I could say to myself, “well, I prefer Clapton to Dylan so I’m not really giving up any utility at all because I don’t care much about counterfactuals or alternative universes”, in which case I would choose answer A. This all depends on how I view placing worth in something which ties back to the idea I put forward earlier that the a priori accounting definition underlying the question is arbitrary.

While only one answer is correct given the definitions laid down in microeconomic theory, this does not mean that any of the choices made by the economists when they placed themselves in the subjective position of the concert goer was incorrect. They simply manifest different manners in which different people order their preferences.

The way that I order my preferences or you order your preferences is not subject to objective judgment. If I choose to view the Dylan ticket as being worth $50 and hence that I am forgoing $50 worth of enjoyment to attend the Clapton concert that is my business, not your’s. (I can even make a pseudo-sophisticated argument based on the fact that I have very limited time and that carrying an extra $40 in cash with me to the Clapton concert does not yield me any utility at all).

This ties back to the tone of the paper. The tone fits into what I have said before about marginalist microeconomics being a manifestation of normative ethics. You can see that the authors of the paper are chastising the economists for not… choosing as economists should choose. This implies that their training should have made them choose in a predetermined manner.

The point is that the idea of opportunity cost is counter-intuitive to how many people (apparently 78% of economists!) actually think when they are weighing up their subjective preferences. This casts serious doubt on whether any theory of behavior based on it is useful for describing the real world. What’s more, trying to subject people to a normative view of how they should view this is an act in moral indoctrination. It has little to do with economics in any sense I understand that word.