By Gaius Publius, a professional writer living on the West Coast of the United States and contributing editor at AmericaBlog. Follow him on Twitter @Gaius_Publius and Facebook. Cross posted from AmericaBlog/strong>

People are still analyzing Obama’s (typically complicated) plan to reduce CO2 emissions from power plants, and both criticism and praise is pouring in. But there’s something almost no one is saying.

Obama’s “Clean Power Plan” is a huge gift to the methane (“Clean Energy”) industry — we’ll show you how in a minute. And guess who’s big in methane? Big oil, of course (see below).

I have carefully read the 645-page Draft Plan. There is much to commend in the Plan’s goals to reduce carbon dioxide emissions and to promote more production of electricity by renewable sources and more efficient end use of electricity.

However, the Plan has a fundamental flaw: it addresses only carbon dioxide emissions, and not emissions of methane, another critically important greenhouse gas. This failure to consider methane causes the Plan to promote a very poor policy – replacing coal-burning power plants with plants run on natural gas (see pages 33-34) – as one of the major four building blocks of the Plan.

Let’s consider methane briefly, since the EPA apparently has not.

In case anyone has forgotten, methane is CH4, a burnable carbon-based molecule. When it escapes into the atmosphere as methane, it’s at least 100 times as powerful a greenhouse gas (GHG) as CO2 over its short (9–15 year) lifetime. Over a 20-year span, methane is considered by the IPCC to be up to 86 times as powerful a greenhouse gas as CO2 — up from the IPCC’s previous estimate of 72 times (see Table 2).

And when methane is burned (combined with oxygen), it creates our friend, airborne CO2.

The Plan should be revised to reflect the importance of methane and the extent of methane emissions from using natural gas. While phasing out coal is a desirable goal, replacing coal with natural gas [methane] trades one problem for another, reducing carbon dioxide emissions but increasing methane emissions to such an extent as to cause even greater global warming.

The IPCC measures methane vs. CO2 on 20-year and 100-year timescales (again, Table 2), but focusing on the 100-year timescale minimizes the effect of methane in the short term, which is what we and our immediate children are most concerned with.

The EPA regulations appear to follow earlier IPCC assessments in minimizing methane as a GHG. Howarth:

“Methane” is mentioned only five times in the 645 pages. The first time is on page 59, where it is stated that EPA could not monetize the consequences of nitrous oxide and methane emissions, and that the Plan therefore focuses only on carbon dioxide emissions.

The second time is footnote #13 on page 59, where it is stated that “although CO2 is the predominant greenhouse gas released by the power sector, electricity generating units also emit small amounts of nitrous oxide and methane….” Note that in both the first and second mention of methane in the Plan, nitrous oxide comes before methane, even though methane is far more important in global warming (IPCC 2013). Further note that the Plan seems to limit the focus to emissions at electric-power generating plants rather than include full life-cycle emissions.

Early in the Plan (page 19), the focus on carbon dioxide is justified by stating “CO2 is the primary GHG pollutant, accounting for nearly three-quarters of global GHG emissions[1] and 82 percent of U.S. GHG emissions.[2] These statements do not accurately reflect the most recent and best science on this topic.

Footnote #1 refers to the [out of date] IPCC (2007) report and is based only on comparing methane emissions and carbon dioxide emissions on a 100-year time scale. In the more recent IPCC (2013) synthesis, the IPCC explicitly states that “There is no scientific argument for selecting 100 years compared with other choices,” and that “The choice of time horizon …. depends on the relative weight assigned to the effects at different times.”

Because the short-term dynamics of the climate system are far more responsive to methane than to carbon dioxide (UNEP/WMO 2011; Shindell et al. 2012), comparing methane and carbon dioxide on shorter time scales is essential if we are to avoid warming the Earth to temperatures that greatly increase the risk of tipping points in the climate over the coming 15 to 35 years (see Howarth et al. 2014 and references therein).

At these shorter time scales, the IPCC (2013) states that the global emissions of methane are actually greater than (slightly, for the 10-year time frame) or 80% of (for the 20-year time frame) those of carbon dioxide in terms of their influence on global warming; at both of these shorter time scales, carbon dioxide is responsible for less than half of global GHG emissions, not three-quarters.

The Plan, Dr. Howarth concludes, is blind to methane and should be revised with methane in mind.

Why Would the “Clean Power Plan” Ignore Methane Emissions?

Note that the “Clean Power Plan” doesn’t ignore methane-burning power plants; but ignores methane itself as a pollutant (greenhouse gas), which undermeasures the damage done by methane as a power source. The Plan also slants the table in favor of methane-burning power plants by using the measurable “emissions per megawatt-hour produced” rather than just “emissions.” The former measurement is more favorable to methane plants than the latter.

But methane is not only a powerful carbon pollutant; its leak rate is greater than government or industry is willing to recognize. Forbes (of all places):

Methane emissions are worse than the conventional wisdom would have you believe, according to a new study by researchers at Stanford University.

Methane, which is the primary component of natural gas, is an especially powerful greenhouse gas, packing more than two dozen times as much global warming potential than carbon dioxide.

Traditionally, environmental regulators and energy industry groups have estimated methane emissions by multiplying the amount of methane emitted by a specific source – e.g., belching cattle or methane leaks at natural gas processing plants – by the number of that source type in a geographic region.

Several studies have tested the accuracy of these traditional methane emissions estimates by using airplanes and towers to measure actual methane in the air.

The new study, “Methane Leakage from North American Natural Gas Systems,” evaluated more than 200 of these atmospheric studies and concluded that the EPA’s methane emissions estimates are too low.

The key take-away: the EPA is likely underestimating U.S. methane emissions from natural gas by at least 50% or more.

And methane leakage — from power plants, from transmission lines and trucks, from liquid natural gas facilities and transportation, and from fracking fields — appears wildly under-reported. Joe Romm writing in ClimateProgress:

A major new study in Geophysical Research Letters by 19 researchers — primarily from NOAA and the Cooperative Institute for Research in Environmental Sciences (CIRES) — suggests natural gas may be more of gangplank than a bridge.

Scientists used a research aircraft to measure leakage and found:

The measurements show that on one February day in the Uintah Basin, the natural gas field leaked 6 to 12 percent of the methane produced, on average, on February days.

The Environmental Defense Fund (EDF) called the emissions rates “alarmingly high.” While the researchers conducted 12 flights, “they selected just one as their data source for this paper,” ClimateWire reports. Researchers actually measured higher emissions on other flights, but atmospheric conditions during those flights “gave the data more uncertainty.”

The Uinta Basin is of particular interest because it “produces about 1 percent of total U.S. natural gas” and fracking has increased there over the past decade.

Apparently, the only people who think methane is the way out of our carbon emissions problem are those in the methane arm of the carbon industry, and Obama’s EPA.

What’s the Relationship Between the EPA and the Methane Industry?

But why would the EPA perform the same underestimation? Could it be they’re captured by industry, the way the Interior Department’s Mineral Management Service, for example, is captured? We can’t know until we look. But to my untutored eye, a very cozy relationship seems to exist between the methane (“Clean natural gas”) industry and the EPA. (Either that, or the level of collusion is even higher; not a pretty thought.)

Consider this from the ANGA, the industry front group: 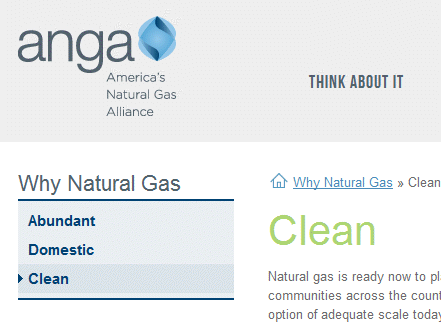 American Natural Gas Alliance wants you to know that methane is “clean” energy.

And this from the EPA:

The EPA also wants you to know that methane is “clean.” 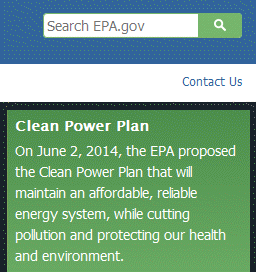 The EPA wants you to know that its methane-friendly Power Plan is as “clean” as methane is.

Methane has been industry-branded as “clean,” primarily in comparison to coal, and primarily because it kicks out less sulfur emissions than coal. That’s a very low bar — which totally ignores the polluting effects of fracking to get it — but still, “clean” succeeds at confusing the citizens. And Obama in his speeches, and his EPA in their writing, are repeating that branding almost endlessly.

To the industry, that’s money in the bank; free advertising; paid-spokesman material. (Presidents, of course, are paid only by the people. Until they leave office, that is.)

Just a taste of who benefits from the pivot to methane. Forbes again:

Among the ten largest U.S. natural gas drillers are:

No carbon left behind, by any carbon company.

What You Can Do

If you’d like a Jimmy Olsen award, research the histories of high-level EPA employees responsible for this “Clean Power Plan.” Barring that, the strongest pushback, though, will come via public comment during the comment period. Your first question:

Should the EPA count methane emissions as “carbon emissions” for the purpose of regulation?
(Answer: Yes.)

The EPA wants you to know you can Get Involved:

■ Attend a public hearing
■ Comment on the Clean Power Plan

Not a bad idea. Why don’t you (and a hundred of your friends) write a little letter? I plan to.