Yves here. This article pokes at a topic near and dear to my heart, which is the generally reverential treatment of Thomas Piketty’s Capital in the 21st Century. It appears to be a classic example of the cognitive bias called halo effect, in which people have a tendency to see things as all good or all bad. Because there is a lot to recommend Piketty’s work, for instance, the fact that it is exceptionally written, that it has made inequality into one of the hottest topics in economics, and that Piketty has done an admirable and exhaustive job of finding and analyzing the returns on certain types of income producing assets are all highly commendable.

But as readers may know, one of my pet peeves is that Piketty has made a very strong claim, in the form of his formula r>g, or the rate of return on capital (which he also calls “profit”) exceeds the growth rate of the economy, when his data falls short of what would be necessary to prove that assertion (for instance, GDP only started to be measured well into the 20th century; older records of wealth might be accurate on capturing the value of agricultural land but dodgy on other types of income producing assets). Piketty defines capital extremely broadly, so the problems with the data are important. Moreover, this VoxEU paper discusses, contrary to Piketty’s assertion, the superior returns to capital in the 20th century were due to house price inflation. They question that as a valid measure and also point out that when you strip housing out of the capital computation, the returns don’t support Piketty’s theory.

Thomas Piketty’s claim that the ratio of capital to national income is approaching 19th-century levels has fuelled the debate over inequality. This column argues that Piketty’s claim rests on the recent increase in the price of housing. Other forms of capital are, relative to income, at much lower levels than they were a century ago. Moreover, it is rents – not house prices – that should matter for the dynamics of wealth inequality, and rents have been stable as a proportion of national income in many countries.

The impressive success of Thomas Piketty’s book (Piketty 2014) shows that inequality is a great concern in most countries. His claim that “capital is back”, because the ratio of capital over income is returning to the levels of the end of the 19th century, is probably one of the most striking conclusions of his 700 pages. Acknowledging the considerable interest of this book and the effort it represents, we nevertheless think this conclusion is wrong, due to the particular way capital is measured in national accounts.

This leads to the following two questions:

• First, why has housing capital increased?
• Second, should it be included in total capital to assess the dynamics of inequality?

The answer to the first question is that the trend is due to the rise in housing prices relative to income in most countries. The answer to the second question is yes, housing is not just wealth but also capital, and it contributes to wealth accumulation. However, to be in line with Piketty’s capital accumulation model, the measurement of housing capital must be based on actual returns to housing – that is, rent.

Why? Because rent, not housing prices, should matter for the dynamics of wealth inequality. Rent represents both the actual income of housing capital for landlords and the dwelling costs saved by ‘owner-occupiers’ (people living in their own houses).

To better see this point, let us ask a simple question. What inequality would there be if each household owned one painting and kept it throughout its lifetime? The wealthiest households might own a pricey Manet or Kandinsky. The poorest might own a painting by a local artist. Now, if the price of art increased uniformly, would this contribute to an explosion of inequality in the sense of a divergent and exponential accumulation of capital? The answer is clearly it would not. Even if the paintings could be rented and generate some income for the owners, this revenue would need to increase proportionally to the selling price and faster than labour earnings for capital to increase faster than total income.

This has not been the case for housing rent relative to income, despite the perception that rents are too high in large cities. The ‘Thénardier’ exploiting the ‘Miserables’ in Victor Hugo’s novel are not back – there has been a stable share of rents in national incomes in many countries. In fact, beyond prices, the most noticeable trend in the housing market in the post-war period was the accession to property of a large and growing middle class – which benefitted from price increases.

The recent divergence in the data between rent and prices therefore leads to the wrong conclusion. When we properly measure housing capital – using a methodology that corrects for the rent-to-price divergence, and in a way quite close to the answer to the famous controversy of the two Cambridges on capital measurement – we find that the capital-to-income ratio including housing is actually stable or only mildly higher in the countries analysed (see Bonnet et al. 2014). (Figure 1 shows France and the US, but the same is true for the UK and Canada – the exception being Germany, where the ratio rose.) These conclusions are exactly the opposite of those found by Thomas Piketty. 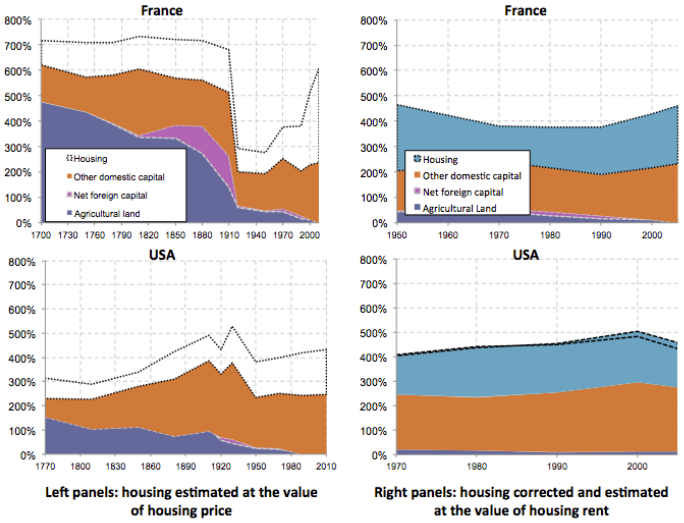 Thinking a contrario, do we really believe that a general drop in the price of housing (as occurred in Spain and Ireland) would be excellent news, leading to a compression of wealth inequality? Again, the answer is clearly not. This shows the fragility of a line of reasoning exclusively based on a rise in the value of housing capital due to the rise in its purchase price – especially when this price diverges from the rental price, as was the case in France and other countries over the past 15 years.

This being said, it is clear that housing price inflation has complex effects. If a part of the middle class gained from it through accession to property, it also potentially hurts the younger generation, who will inherit more from their parents but will need to rent for a longer time. Perhaps this is for the best – we think that European policies aiming to promote property ownership are unwise, since they lead to lower geographic mobility and excessive risk-taking in wealth accumulation.

In conclusion, we do not believe that “capital is back” simply because housing price increases have artificially raised housing wealth relative to the true rental price. The logic of the argument requires a different measurement of capital, and the one we propose shows instead a relative stability of capital over income. We simply need more work and more thinking to understand the particular role of housing in inequality – something absent from the recent works on inequality.