I recently made several points that need to be hammered over and over between now and the U.N. climate meeting in Paris in late 2015:

The United Nations Climate Change Conference, COP21 or CMP11 will be held in Paris, France in 2015. This will be the 21st yearly session of the Conference of the Parties (COP 21) to the 1992 United Nations Framework Convention on Climate Change (UNFCCC) and the 11th session of the Meeting of the Parties (CMP 11) to the 1997 Kyoto Protocol. The conference objective is to achieve a legally binding and universal agreement on climate, from all the nations of the world. Leadership of the negotiations is yet to be determined.

All of the talk in the lead-up to Paris will be about how much “burnable carbon” we can still emit. In other words, what’s our remaining “carbon budget”? Or more to the point, how much more money can Exxon make and still be one of the good guys?

Built into those U.N. discussions are a couple of assumptions fostered by the IPCC:

▪ That 2°C global warming is a safe target.

▪ That doing what gives us a 66% chance of achieving the 2° warming target is a good enough.

▪ That Exxon, the Saudis, David Koch and others deserve to make some money from their buried assets.

You’ll hear about this endlessly in the next year or so. Now is the time to counter with the truth and tell it to everyone you know.

None of Those Statements is True

There’s not a word of truth to any of the bulleted statements above, and the time to counter them is now, before David Gregory and George Stephanopoulos tell a hungry nation — “Here’s what we know to be true.” If Big Media latches onto the statements above, the climate war is lost until a real crisis, like Miami sinking beneath the waves, occurs.

So please, help counter the lies. They exist only to keep the carbon industry (David Koch, Rex Tillerson and Exxon) in wealth and operation. Our goal in the next few weeks will be to show that:

▪ 2°C warming takes our species far outside the climate zone that supports human civilization. Once outside that zone, the earth will stay there for thousands or millions of years.

▪ A 66% chance of species survival is Russian roulette with a three-chambered gun. Only David Koch, whose life expectancy is less than your child’s, wants you to lift it to your head and fire. If you pull the trigger, you take the bullet and he makes more money.

▪ Exxon, the Saudis, the Kochs and their ilk deserve nothing more than they already have, and probably a whole lot less.

This piece is the first in a series — Why there’s no more “carbon budget.” The reasons are many; this is one of them.

David Spratt at the invaluable Climate Code Red has a brilliant, cogent and clear explanation of the worse-than-Russian-roulette odds in the IPCC’s own data. Spratt (my emphasis; numbers in parentheses refer to his footnotes):

For the last two decades, climate policy-making has focused on 2°C of global warming impacts as being manageable, and a target achievable by binding international treaties and incremental, non-disruptive, adjustments to economic incentives and regulations (1).

But former UK government advisor Professor Sir Robert Watson says the idea of a 2°C target “is largely out of the window”, International Energy Agency chief economist Fatih Birol calls it “a nice Utopia”, and international negotiations chief Christiana Figueres says we need “a miracle”. This is because, in their opinions, emissions will not be reduced sufficiently to keep to the necessary “carbon budget” (2).

The numbers are these: According to the IPCC, from pre-industrial times through the year 2011, man has emitted a total of 515 GtC (gigatons, or billions of tons, of carbon), mainly in the form of CO2, a greenhouse gas. At present, we continuing to emit carbon, at the rate of 10 GtC per year. So by 2015, total emissions will be at least 545 GtC.

Through the magic of faith that 2°C warming is “safe,” the IPCC has come up with a total of 790 GtC “left to burn,” which leaves about 250 GtC left in the “budget.” But that allowable budget comes with a condition — that you accept a 33% chance of failing to keep to that (already magical) warming target.

It’s all a matter of odds. The more carbon we burn, the less likely we are to stay below any warming target. And David Spratt has found a marvelous chart that lays out all of the percentages for the IPCC’s (magical) 2°C warming target.

Here’s that chart (click to open large in a new tab). I’ll walk you through the explanation after you open it. 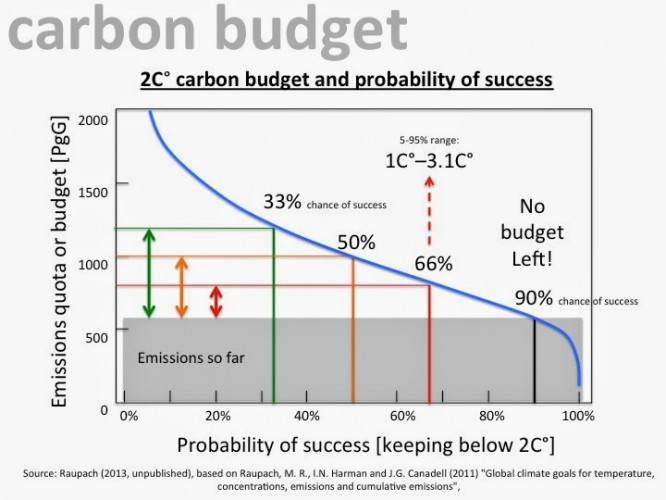 To orient yourself, start with the left (Y) axis. This represents cumulative carbon emissions since pre-industrial times. The gray area under the 515+ level represents emissions through 2011 — a part of the “budget” we’ve already spent. Everything above that is future emissions.

(A note about units for the Y-axis — 1 PgC, “petagram” of carbon, is the same amount as 1 GtC, gigaton of carbon. It’s two ways to say the same thing.)

The X-axis shows the odds of success, defined as “staying below 2°C warming,” for a given emissions target.

The blue line shows that as cumulative emissions go down, the odds of “success,” as defined, increase. See where the blue line crosses below 515 GtC? That’s the 90% chance of “success” point. In other words, if you want a less than 1-in-10 chance of failure, stop emitting carbon. Completely. And now.

I’ll deal with the 2°C “unicorn” in a separate piece. 2°C warming really is a unicorn, with a dangerous dragon inside. But for now, let’s pretend, along with the IPCC, that 2°C is totally safe, so long as we don’t go higher.

So what does the graph say? It says, take your choice. If you want just a two-thirds chance of staying below the (mythical) 2°C warming, you can let David Koch and Exxon get richer. If you want a 90% chance? Kill the carbon industry now.

You read that right. If we want a 90% chance of staying below a pretend-safe 2°C warming, we have to Stop Now. Zero future emissions.