Yves here. This post from VoxEU gives a partial answer to a question many US readers have been asking: what are the prospects for the Transatlantic Trade and Investment Partnership? As we’ve written, the Transatlantic Trade and Investment Partnership’s evil twin, the TransPacific Partnership, looks to be in trouble. Both the Senate and the House are opposed, and Obama wants them to give him “fast track” approval to facilitate completing the accord. Our resident Japan commentator Clive says the Japanese press is treating the deal as dead, absent major changes in US posture that no one expects to happen. The Wikileaks publication of two draft chapters showed that all of the proposed parties to the agreement have significant objections to many of the provisions.

But much less is known about the state of play of the Transatlantic Trade and Investment Partnership. Many commentators have assumed it is moving forward simply due to positive messaging by the US Trade Representative’s office, the assumption that Europe and the US have generally common interests, and the lack of negative press. But as we wrote recently, sentiment in Germany is strongly against the Transatlantic Trade and Investment Partnership. With Germany already reconsidering its relationship with the US as a result of US spying, pushing back against the investors panels, which is the part that Germans and people not in the pocket of multinationals find most offensive, is far more likely than if US/German relations were on a better footing.

The VoxEU post recaps commentary among economists on the Transatlantic Trade and Investment Partnership. What is striking is the level of objections, and that if you look carefully, most of the economists who are supportive of the TTIP and TPP are American, while most of the Europeans (and Dean Baker) are opposed or (like Pascal Lamy) approve of the liberalization of trade but object to the investor panels. The European economists’ reactions likely represent a considerable swathe of official views.

An early draft of the Transatlantic Trade and Investment Partnership (TTIP) sparked an intensive public debate over possible advantages and disadvantages. This column reviews some arguments in favour of the Partnership and against it. While there is some debate over how large the economic benefit could be in the face of already relatively low trade barriers, critics claim that the deal will lower standards of consumer protection, provision of public services, and environmental protection in the EU.

A study by the Centre for Economic Policy Research (CEPR 2013) for the European Commission models the effects of the Transatlantic Trade and Investment Partnership (TTIP) in a computable general equilibrium model. An ambitious deal, consisting of tariff barriers being lowered to zero, non-tariff barriers lowered by 25%, and public procurement barriers reduced by 50%, would lead to an increase in EU GDP by 0.5% by 2027. Growth effects for the rest of the world will be positive, on average, 0.14% of GDP due to increased demand from the EU and US. Because of different compositions of trade, particularly low income countries will not be negatively affected by the TTIP.

Another, less frequently cited study by the Bertelsmann Foundation (2013) finds larger long-term GDP per capita effects of 5% for the EU and 13.4% for the US as a result of dismantling all tariff and non-tariff barriers. Here, gains would largely come at the expense of third countries. For Canada and Mexico, whose free trade agreements with the US would lose value, TTIP would in the long run imply a 9.5% and 7.2% decrease in GDP per capita over the baseline scenario.

The EU Trade Commissioner Karel de Gucht (2014a), citing the CEPR numbers, writes that TTIP offers significant benefits to the EU and the US over ten years during times of hesitant economic recovery. As shared values will facilitate negotiations, results should be reached in three dimensions: Market access, regulatory cooperation, and trade rules. Improved market access will benefit European companies and consumers alike. Standardisation in regulation would avoid unnecessary costs for global producers.

Dean Baker (2014a) argues that calls to support TTIP for its beneficial impact on jobs and growth are lies: The CEPR model assumes full employment anyway, and a GDP raise of only 0.5% over 13 years will not have a discernible impact on employment. Growth effects may in fact even go in the opposite direction — stronger patent and copyright protections may result in higher prices for goods.

Figure 1. Annual output gains from TTIP by type of liberalisation 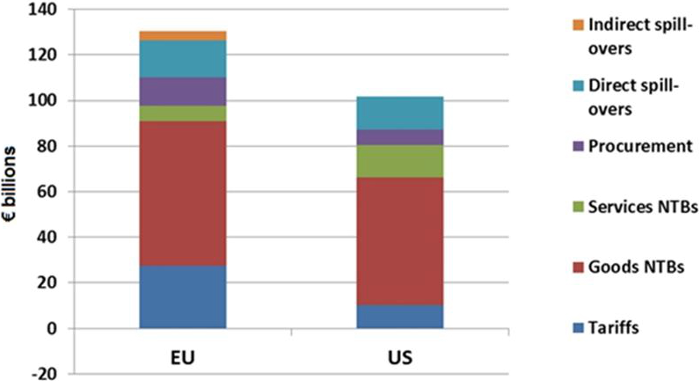 Gabriel Siles-Brügge and Ferdi De Ville (2013) challenge the proclaimed benefits of this much-vaunted deal. Most of the economic benefit outlined in the CEPR study is due to the dismantlement of non-tariff barriers. Yet, the Commission has itself pointed out that only 50% of non-tariff barriers are at all ‘actionable’, i.e. within the reach of policy. Eliminating half of these, as assumed by the CEPR, seems already highly ambitious. Furthermore, due to strong inter-sector linkages, these benefits will only materialise if liberalisation is successful in all sectors.

The Global Significance of Bilateral Agreements

Pascal Lamy (2014) writes that preferential trade agreements (PTAs), such as TTIP, could be very beneficial if they helped to bring down remaining tariff barriers. However, most PTAs focus more on regulatory issues than tariffs. Some non-tariff barriers, such as consumer protection, serve legitimate objectives. And there exists a risk that PTAs may lock various groups into different regulatory approaches, increasing transaction costs. In the end, a functional multilateral trade system through the WTO remains vital to avoid economic fragmentation and set globally sensible rules.

Michael Boskin (2013) points out that the TTIP may have consequences that extend beyond the US and the EU. After NAFTA was signed, the Uruguay round of trade talks was revived. Similarly, a successful TTIP may be a major impetus for rekindling the moribund Doha Round. It will be of great importance whether compromises can be found in the truly contentious issues between the EU and the US. One of the most difficult is the EU’s limitation of imports of genetically modified foods, which presents a major problem for US agriculture. Another is financial regulation, with US banks preferring EU rules to the more stringent framework emerging at home. This is of interest to countries outside the deal, too; if the EU relaxed its rules on genetically modified food imports and translated this with careful monitoring to imports from Africa, this could be a tremendous boon to African agriculture.

Hans-Werner Sinn (2014) is not surprised that bilateral trade agreements have been lately gaining traction globally, as there is no real progress on multilateral trade negotiations. The Doha round of WTO talks basically was a flop. Currently, fear of negative effects on consumer protection in the EU is distorting the debate. In reality, consumer protection standards in the US are often much higher than in the EU where, following the Cassis de Dijon ruling of the European Court of Justice, the minimum standard applicable to all countries is set by the country with the lowest standards. TTIP could bring significant economic benefits while scrapping some misguided EU regulations, such as the capping of CO2 emissions on cars, which is a covert industrial policy aimed at protecting Italian and French manufacturers of smaller cars.

Paul Krugman (2014) writes that if the Trans-Pacific Partnership (TPP) agreement of the US with 11 countries throughout the Asia-Pacific region were to fail, it wouldn’t be a major disaster. Real trade barriers – tariffs – already are pretty low. The International Trade Commission in their latest report put the cost of American import restraints at 0.01% of GDP. What these agreements tend to be really about are issues such as intellectual property rights – with far less certain advantages. Intellectual property rights create temporary monopolies. These may be necessary to spur innovation but are not connected to classical arguments in favour of free trade.

Ryan Avent (2014) thinks that Krugman hasn’t done his homework on this issue. Firstly, tariffs are not universally low. Even if the macroeconomic impact may be limited, reducing high tariffs on some goods would be microeconomically desirable. Secondly, one of the ambitions of both TPP and TTIP is the reduction in non-tariff barriers. In most cases, such as agricultural imports, these barriers are much costlier than tariff barriers.

Dean Baker (2014b) is highly sceptical of the usefulness of increased protection of intellectual property: The possibility of silly patents such as one on a peanut butter sandwich in the US only raises prices and impedes competition. The big winner may be the pharmaceutical industry, which may extend the unchecked patent monopolies it enjoys in the US to the EU, resulting in higher drug prices and lower quality healthcare. Other companies see TTIP as a way of promoting their particular interests, for example, by being able to use free trade arguments to circumvent the democratic process on issues such as fracking.

TTIP is not about the interests of the US dominating those of the EU, but of the interests of capital owners prevailing over those of ordinary citizens, writes Jens Jessen (2014). Investor protection clauses in TTIP would be a vast threat to national policies on culture and education — public universities could no longer be supported to be more affordable than private ones. Support to a local film industry would be impossible as big companies would have the same rights to subsidies. Production companies for popular entertainment could sue states to extend to them their support for local operas and symphony orchestras, and public radio stations would be under threat as well.

Karel de Gucht (2014b) sharply retorts that these allegations are unfounded — the EU treaties and the UNESCO convention on cultural diversity require member states to protect cultural diversity and explicitly permit schemes such as support to local film industries, whereas audio-visual services are not at all in the scope of TTIP anyway. Investment protection treaties, of which Germany alone has signed 130, have never included compensation rights for firms in case of profit reductions. And after Poland signed an investment protection treaty with the US in the early 1990s, its right to offer subsidies in the sector of culture or education was never called into question.

The investment chapter in TTIP is less of a threat to EU and US democracy than often alleged, writes Robert Basedow (2014). Critics claim that investor-state dispute settlement clauses will allow investors to sue states before supranational arbitrational tribunals for the annulment of social, health or environmental protection laws. However, due to the existence of a multiplicity of bilateral treaties with financial hubs like Hong Kong or Singapore, investors with holdings in these jurisdictions already have this right today. Indeed, TTIP offers the chance to make such arbitration proceedings more transparent and legitimate.

Baker, D (2014a), “Why Is It So Acceptable to Lie to Promote Trade Deals?“, Beat the Press Blog, Centre for Economic and Policy Research (Washington, DC) 30 May.

Basedow, R (2014), “Far from being a threat to European democracy, the EU-US free trade deal is an ideal opportunity to reform controversial investment rules and procedures”, LSE EUROPP Blog, 2 July.

Siles-Brügge, G and de Ville, F (2013), “The potential benefits of a US-EU free trade deal for both sides may be much smaller than we have been led to believe”, LSE USAPP blog, 17 December.