What’s at stake: Speaking at the Federal Reserve Bank of Kansas City’s annual conference Jackson Hole, Wyo., ECB President Mario Draghi made an important speech recognizing that the recovery in the euro area remains uniformly weak and that the euro area fiscal stance was not helping the ECB do its job. Interestingly, French leaders also reintroduced over the weekend the notion of aggregate demand, a concept they had noticeably moved away from with the “Pacte de responsabilite”.

The qualification of the European economic outlook

Joe Weisenthal writes that Draghi’s speech is significant because it acknowledges that the eurozone is in a massive ongoing crisis. Only two weeks ago, ECB President Draghi still considered that “the available information remain[ed] consistent with our assessment of a continued moderate and uneven recovery of the euro area economy”. This time, Draghi described that the “the most recent GDP data confirm[ed] that the recovery in the euro area remains uniformly weak, with subdued wage growth even in non-stressed countries suggesting lackluster demand.”

Greg Ip writes that Mario Draghi sounded strangely dismissive of price development concerns after his last press conference. He noted that excluding food and energy inflation was 0.8%, and argued that the decline in inflation expectations was all in the short term, whereas “long-term expectations remain anchored at 2%.” At his speech on Friday in Jackson Hole, his tone was much less sanguine. Inflation, he noted, has been on a downward path from around 2.5% in the summer of 2012 to 0.4% most recently. Departing from his prepared text, he said, if “low inflation were to last a long period of time, risks to price stability would increase.” He said inflation expectations had experienced a “significant decline at the long horizon,” by 15 basis points (five-year inflation starting in five years’ time). “If we go to shorter and medium term horizons,” the declines “are even more significant. 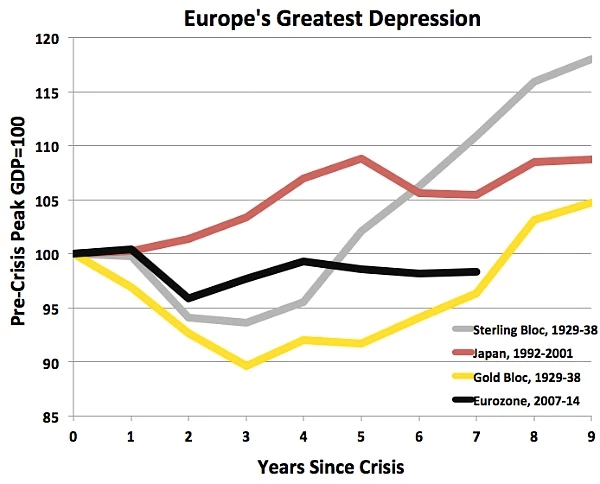 Joe Weisenthal reports that Citi’s top economist, Willem Buiter, expects monetary policies to widely diverge as both the Bank of Japan and the European Central Bank would engage in “major” quantitative easing programs later this year or early next year. This is because their economies are flagging, particularly in Europe, where inflation expectations are collapsing. On the flipside, the Fed and the Bank of England are both expected to begin the normalization process (rate hikes) fairly soon (sometime next year). In its daily email, Sober Look writes that the euro’s decline accelerated on Sunday evening, as Jackson Hole discussions solidified the expectations of diverging monetary policies between the US and the Eurozone. 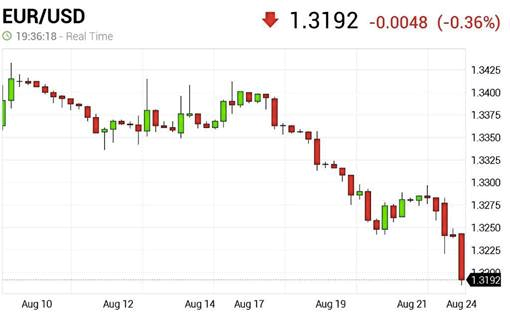 The departure from previous fiscal policies

Brian Blackstone writes that ECB President Mario Draghi on Friday signaled a departure from the austerity-focused mind-set that has dominated economic policy-making in the euro zone since the onset of the region’s debt crisis nearly five years ago. Mario Draghi writes that “since 2010 the euro area has suffered from fiscal policy being less available and effective, especially compared with other large advanced economies […] it would be helpful for the overall stance of policy if fiscal policy could play a greater role alongside monetary policy, and I believe there is scope for this, while taking into account our specific initial conditions and legal constraints.“

Simon Wren-Lewis writes that to understand the significance of Draghi’s speech, it is crucial to know the background. The ECB has appeared to be in the past a center of what Paul De Grauwe calls balanced-budget fundamentalism. Traditionally ECB briefings would not be complete without a ritual call for governments to undertake structural reforms and to continue with fiscal consolidation. The big news is that Draghi does not (at least now) believe in balanced-budget fundamentalism. Instead this speech follows the line taken by Ben Bernanke, who made public his view that fiscal consolidation in the US was not helping the Fed do its job.

Simon Wren-Lewis writes that we should celebrate the fact that Draghi is now changing the ECB’s tune, and calling for fiscal expansion because it may begin to break the hold of balanced-budget fundamentalism on the rest of the policy making elite in the Eurozone. But Draghi is only talking about flexibility within the Stability and Growth Pact rules, and these rules are the big problem. Paul Krugman writes that even if Draghi gets the situation, the combination of the euro’s structure and the intransigence of the austerians means that the situation remains very grim.

Richard Portes and Philippe Weil write European citizens must hope that their policy makers will recognize that the acute, pressing problem is aggregate demand. Repairing the credit system, implementing serious reforms of state expenditure and taxation, creating more flexible labor markets, finally opening the services market to cross-border competition – all are indeed very important. But they will not liberate the eurozone from stagnation.

There has also been a striking change in the language used by French President Francois Hollande over the weekend. A few months ago, Francois was re-named Jean-Baptiste Hollande in the blogosphere for reviving the “supply creates demand” fairy as he embraced the view of his compatriot Jean-Baptiste Say that to boost growth one needs only to care about creating optimal condition for production and supply, and that demand will follow.

In his recent interview with Le Monde, Francois Hollande appeared to rebalance his approach saying that Europe faced a clear lack of demand (“le diagnostic est implacable: il y a un problème de demande dans toute l’Europe”). He suggested that Europe should support overall demand while national policy should mostly remained focus on supply side policies. Meanwhile, Arnaud Montebourg, the economy minister, shortly joined by Benoit Hamon, the Education minister went further and called for a new policy direction, also at the national level, arguing that the fiscal consolidation path needed to be adjusted substantially and that France shouldn’t accept the economic choices and ideological preferences of the German CDU.