Keynes himself was wholly convinced that the central bank had full control over the long-term rate of interest. In a 1933 open letter to US President Franklin Roosevelt Keynes wrote:

The turn of the tide in great Britain is largely attributable to the reduction in the long-term rate of interest which ensued on the success of the conversion of the War Loan. This was deliberately engineered by means of the open-market policy of the Bank of England. I see no reason why you should not reduce the rate of interest on your long-term Government Bonds to 2½ per cent or less with favourable repercussions on the whole bond market, if only the Federal Reserve System would replace its present holdings of short-dated Treasury issues by purchasing long-dated issues in exchange. Such a policy might become effective in the course of a few months, and I attach great importance to it.

What Keynes was advocating was what has since been referred to as Operation Twist. This was a policy that was first initiated in the US during the Keynesian heyday under President John F. Kennedy. The Wikipedia page provides a nice overview of how it worked — note how it is identical to Keynes’ suggestion in his 1933 letter:

The Fed utilized open market operations to shorten the maturity of public debt in the open market. It performs the ‘twist’ by selling some of the short term debt (with three years or less to maturity) it purchased as part of the quantitative easing policy back into the market and using the money received from this to buy longer term government debt.

The policy basically did nothing. Below are the interest rates of the era. 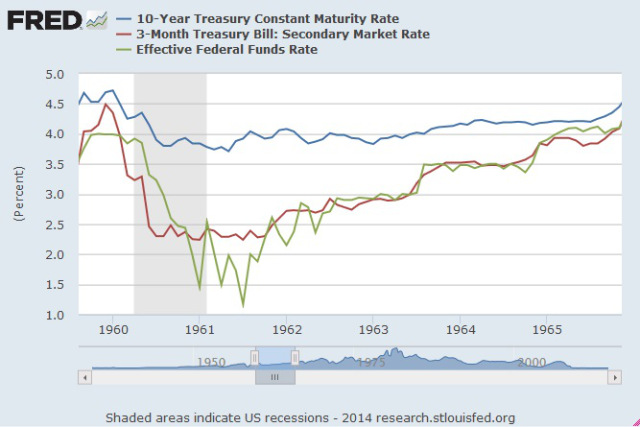 Recently the Federal Reserve Bank of San Francisco released a study claiming that the program had actually worked. I won’t get into the methodology of the study but I think its basically rubbish. The fact is that the stated aim of the program did not come to pass in any meaningful way. But the reason that the Fed probably commissioned the study was because they tried Operation Twist again once more in 2011. The Fed described the program thus after it had been completed:

Under the maturity extension program, the Federal Reserve sold or redeemed a total of $667 billion of shorter-term Treasury securities and used the proceeds to buy longer-term Treasury securities, thereby extending the average maturity of the securities in the Federal Reserve’s portfolio. By putting downward pressure on longer-term interest rates, the maturity extension program was intended to contribute to a broad easing in financial market conditions and provide support for the economic recovery.

So, did it work? Not unless the Fed were lying about when they started the program. The press release at the time dates the program to September 21st 2011. Keeping that in mind let’s look at the long-term interest rates in that period. (We do not bother showing the short-term interest rates here because, as everyone knows, they are basically zero throughout the period). 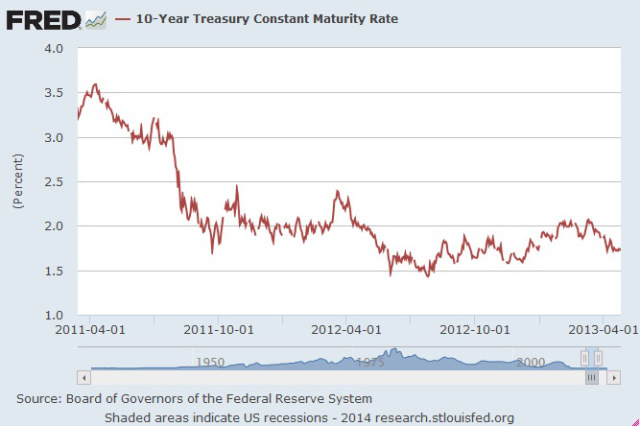 Do you see that significant drop in long-term interest rates of about 1%? Well, that occurs in July 2011 and reaches its bottom in September 2011. This opens the possibility that the Fed actually undertook the program two months before they announced it. Unfortunately, there is no hard evidence of this and unless such evidence emerges we must assume that the second attempt at Operation Twist was indeed a failure.

On the left I have graphed all the interest rates together. The pattern should be clear to the reader. But in order to be concrete I have also included a regression of the the Fed funds rate on the ten-year bond yield. As we see the relationship is positive and quite statistically significant. It is quite clear that the central bank controls the long-term rate of interest through its short-term interest rate policy. Indeed, the fact that the regression does not produce a perfect fit is mainly due to the fact that the spread between the long-term rate and the short-term rate widens whenever the Fed drops the short-term rate significantly — this can be seen quite clearly in the graph on the left. 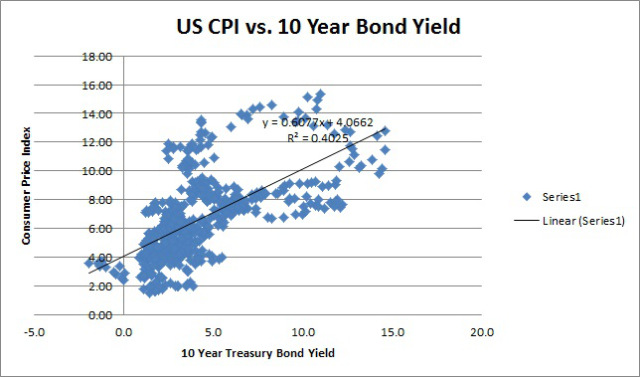