Yves here. While Pilkington is a bit leisurely in setting the stage for his anthropological take on the economics tribe, rest assured that the post is both amusing and instructive.

‘Life Among The Econ‘ is a satirical paper written by the economist Axel Leijonhufvud and published in 1973. In the paper Leijonhufvud refers directly the great work of cultural anthropology The Savage Mind by the French Structuralist anthropologist Claude Levi-Strauss. Before moving on to the paper it is probably best to understand something about Levi-Strauss’ work as I think that the content of the paper would otherwise be lost on many economics-oriented readers.

Levi-Strauss argued that cultural life in primitive societies rested on haphazard and rather arbitrary organisation. People would create symbols and systems of organisation the only purpose of which was to facilitate smooth social relationships. While the members of a tribe might imbue the symbols with seemingly enormous value — and people who violated them might be severely punished — looked at from the outside they seemed rather arbitrary and changed from tribe to tribe mainly based on chance.

Anthropologists had long recognised that tribal structures — indeed, all cultural structures — require norms and myths which to live by. Myths are stories that give life meaning, while norms are somewhat like laws or prohibitions. Perhaps the best way to think about this is to take a recent law in our own societies that now seems antiquated but which was taken seriously only a few decades ago: namely, laws against homosexuality.

Why were there laws against homosexuality throughout most of the 20th century? Does homosexuality harm anyone? Today I would say that most people would say that it does not. So, why the laws? Simply because our cultures developed in that way. Other cultures did not. In Ancient Greece, for example, homosexuality was by no means against the law. The laws that remained in place until the end of the 20th century mostly derived from the Judeo-Christian tradition that we inherited. There was nothing functional about them. Things just happened that way. (Indeed, readers of cultural history will know that our own culture is basically unique in attributing to homosexuality an actual sexual identity. In most cultures sexual activity is dealt with based on acts, not proclivities that are supposed to be immutable).

The point is that much of cultural organisation is arbitrary. It often serves no real purpose. Evolutionary psychologists might tell you otherwise, but they are just modern day myth-makers telling stories that try to give us meaning and, ultimately, justify certain cultural patterns that we hold dear by appealing to the narrative structure of evolutionary biology and imposing it on cultural development metaphorically much in the same way as marginalist economics transferred metaphors from physics to the social sciences. Levi-Strauss introduced the idea of the ‘bricoleur’ as the person who engages in such constructions.

The bricoleur is not a person conceived of acting in line with a plan or toward a goal. For example, if I go to the shop, buy foodstuffs and cook food I obviously have a plan and a goal. A bricoleur — or, more accurately, a person partaking in the process of ‘bricolage’ — just throws things together in line with how he or she sees fit. There is no real point to the activity but it persists in all human cultures and makes up a key component of our cultural organisation. Perhaps the easiest way is to think of a child playing with lego bricks or an artist painting an abstract piece of art.

Society bestows upon bricoleurs important roles. In primitive society shamen or priests or some other caste are typically anointed to serve this role. They come up with stories of various kinds, contact the spirit world and even engage in fake healing in societies without medicine in which people feel like they need to do something in the face of illness and disease. Basically their role is to give meaning to those around them. In order to do so they are imbued with a certain aura that we do not find in, for example, the case of a modern dentist or the advertiser.

This aura allows their interpretations of the world to be accepted largely without question as these men are supposed to possess abilities and traits that the lay person could never understand. Obviously, modern day religion serves basically the same function, as do cults and even con-men who sell fake medicine to desperate and gullible people.

Leijonhufvud’s paper is written as a satire. But like all the best satires it serves a serious purpose. He makes up a tribe that he calls the ‘Econs’. He is referring to economists, of course. He is perfectly correct in doing so, economists do indeed serve basically the same function in society as shamen do in primitive society: namely, they tell stories about how the economy works and about how society should organise itself. He then goes on to say that the economics profession has actually developed as a sort of micro-tribe within society. He particularly notes the fetishisation of the model — which he jokingly refers to as the ‘modl’. He writes: 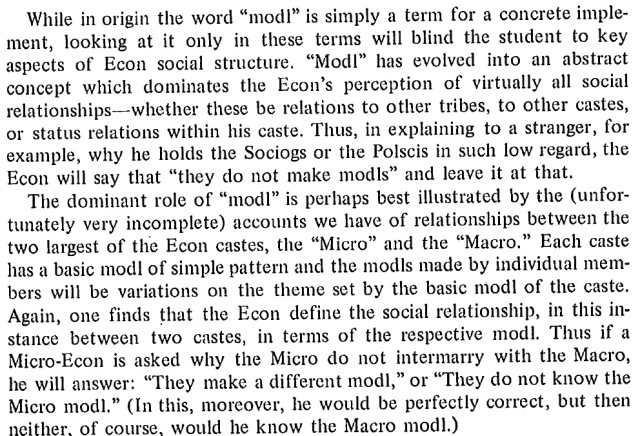 Anyone who has dealt with economists will be all too familiar with this. The model is actually part of the person’s identity. They internalise it and, when they engage in rivalry with other economists, they compare their models.  Viewed from the outside with a critical eye it is actually a very strange process. But if you have an appreciation for anthropology you will quickly see what is going on. The whole thing is about group formation and social alliances. Because the economists have long turned away from the real-world (unless it is viewed through the model, of course!) they need another way to argue about things (after all, aren’t academics supposed to argue about things?). So, what they have done is formed into various social groups that then build and compare models. It is really rather amusing when you have a sense of irony about the whole thing.

Leijonhufvud also noted something more ominous though. He saw clearly that the tendency was actually moving further and further away from empirical reality. He wrote: 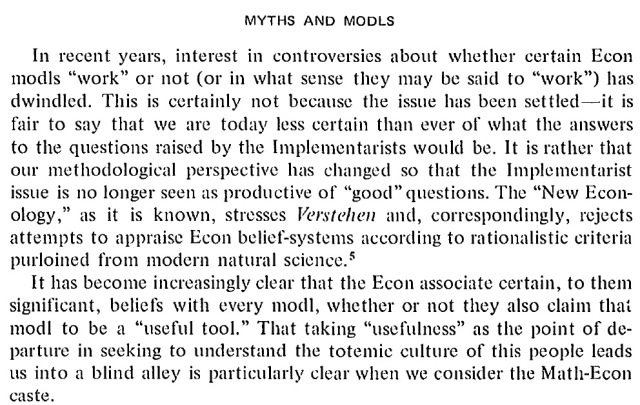 For a while economics survived the turn to weird ‘savage mind’ style behavior. People who were more inclined toward the reality of doing practical work had a set of tools that were at least somewhat workable. But Leijonhufvud could see this changing especially with the rise of the general equilibrium theorists. Today this has completely taken over. DSGE models are claimed to be cutting edge for policy analysis and some even believe that Real Business Cycle models say something about the real world. Whereas the likes of Frank Hahn knew well that the general equilibrium framework was just an intellectual game, the students took it literally. That is when we entered what we might call the ‘dark age of economics’ and that is where we remain today.

You need only read the altogether strange defences of model-based forecasting to see that something properly weird is going on in the land of the Econ. It is well-known that the models don’t do much better than ‘intelligent guesswork’. (I would say they do worse than ‘intelligent guesswork’ but then I do not apparently have the authority to decide who is doing guesswork and whether they are ‘intelligent’ enough to be considered…). Wren-Lewis, for example, comes up with the following justification:

Take output for example. Output tends to go up each year, but this trend like behaviour is spasmodic: sometimes growth is above trend, sometimes below. However output tends to gradually revert to this trend growth line, which is why we get booms and recessions: if the level of output is above the trend line this year, it is more likely to be above than below next year. Using this information can give you a pretty good forecast for output. Suppose someone at the central bank shows that this forecast is as good as those produced by the bank’s model, and so the bank reassigns its forecasters and uses this intelligent guess instead.

This intelligent guesswork gives the bank a very limited story about why its forecast is what it is. Suppose now oil prices rise. Someone asks the central bank what impact will higher oil prices have on their forecast? The central bank says none. The questioner is puzzled. Surely, they respond, higher oil prices increase firms’ costs leading to lower output. Indeed, replies the central bank. In fact we have a model that tells us how big that effect might be. But we do not use that model to forecast, so our forecast has not changed. The questioner persists. So what oil price were you assuming when you made your forecast, they ask? We made no assumption about oil prices, comes the reply. We just looked at past output.

Woah! What the hell just happened there!? If I were working for a central bank and someone said to me “what will happen to output if oil prices rise substantially?” I would dutifully go and examine the relevant statistics. I would look to see if the data showed that large oil price increases had large effects on output. If the data showed that they did I would return to the person and say “after examining the evidence it looks to me like there is a good chance that a substantial rise in the oil price will affect output”. If I had a little more time I would then go and try to get data for countries and see what it said to substantiate my findings.

Wren-Lewis, on the other hand, would consult his model which would give him whatever result that he himself had built into it. Do you see the difference here? I hope you do. What I would be doing would be evidence-based research. It would be by no means perfect for any number of different reasons. But it would at least be evidence-based. Wren-Lewis would consult a model that comes pre-built with an estimate of how oil price increases should affect output. This is absolutely ‘savage mind’ behavior. Wren-Lewis would have us construct what anthropologists call ‘totems‘ and then consult these totems when we need insights into our social problems.

This is what I mean by the fact that the economists have come to believe their own fictions. It is very strange stuff altogether. They build the models based on the a priori assumptions that they hold. Seemingly they then forget these assumptions. Then when they need an answer they consult the model which spits back at them what they already built into it. This output is then assumed to be Truth because it comes imbued with a sort of aura. In more practical, real-world sciences this has a name: its called GIGO which stands for Garbage-In, Garbage-Out. In more primitive societies this is similar to constructing altars to supposed oracles and then going to these altars to find out about the future, only to find a Truth that you yourself have already built into the altar. (For a more colloquial example think of when people read images into clouds).

Sometimes after a few beers some of my friends — many of whom have PhDs — ask me about this modelling stuff and how it all works. They really do view it as being a sort of opaque practice, albeit one that they are inclined not to trust. When I explain it to them they literally don’t believe me a great deal of the time. There is one exception though — and he is a rather well-known anthropologist. Make of that what you will.