Yves here. Although finance professionals have moved boatloads cash into emerging markets in a QE-stoked carry trade, and they are certain to yank it out when the Fed starts looking like it will be a tad less munificent to the asset holding classes, the central bank has perversely disavowed any responsibility for the resulting whipsawing of emerging market economies. For instance, we wrote in April:

India central bank governor Raghuram Rajan took to Bloomberg to criticize the Fed for its failure to coordinate policies with the rest of the world. And Rajan can’t be dismissed as a partisan defending his country’s policies. Rajan is a Serious Economist, former IMF chief economist, and best known in popular circles for presenting a badly-received paper at Greenspan’s last Jackson Hole session that said that financial innovation was making the world riskier and could well cause a full blown financial crisis. And he assumed office only last September, so he’s also not defending policies he implemented…

Rajan is blunt by the standards of official discourse:

Some of his key points:

Now when they are withdrawing that money, they are saying, “You complained when it went in. Why should you complain when it went out?” And we complain for the same reason when it goes out as when it goes in: it distorts our economies, and the money coming in made it more difficult for us to do the adjustment we need for the sustainable growth and to prepare for the money going out.

Ilargi discusses more specifically what “money going out” looks like.

Emerging markets are about to get hit by a whopper of a double whammy. And if I were you, I wouldn’t be too surprised if it takes on epic proportions.

The exposure that emerging markets, countries in the less wealthy parts of the globe, Asia, Eastern Europe, Africa, Latin America, have to the west has grown at a very rapid clip since, let’s say, Lehman. These countries were hit hard by the western crisis, but found what looked like a sugar mountain afterward when western interest rates plunged to zero and beyond, which provided them with both of the seemingly beneficial sides of what will now become their double whammy.

First, western money flowed, make that flooded, into their economies at unparalleled levels, driven by a chase for yield instigated by the difference between ultra low interest rates in the west and much higher rates beyond. For emerging countries, this has been a boon beyond belief. No matter how corrupt or poorly organized they may have been or still are, most showed nice growth numbers for a few years. It wasn’t really a carry trade in the literal sense of the word, but it was close. And it’s now coming to an end. 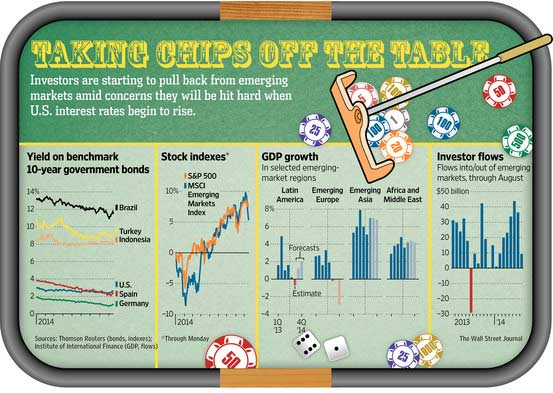 Second, and likely to work out even much worse, the ‘emerging governments’ borrowed those cheap US dollars using anything not bolted down, including their national treasures, as collateral, and they now face a doubling, tripling, quadrupling etc. of the interest rates they have to pay on those loans. Which looks about like this (and something tells me this could well underestimate reality by a considerable margin): 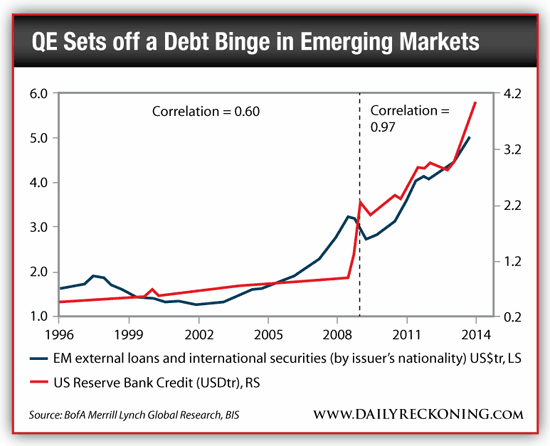 Janet Yellen is about to announce rising rates, and whether it’s tomorrow or in 6 months is not that relevant in all this, it’s expectations that rule the day. Emerging markets will first be hit by outflows of western investment – or rather casino – capital, just because of the fear in the markets of what Yellen will do, and then get the second whammy when rates move from 0.25% to 1.25% and then some.

We see the initial jitters today. Or rather, they’re not the initial ones, just the first ones to come from people other than western investors.

What sticks out that the western press has very little attention for the ‘other side’s’ point of view. Still, here’s the Indonesian FM with a pretty clear message for someone who sees his country being suspended by its balls:

Asia’s developing nations may have to sacrifice some growth next year and focus on keeping their economies stable amid potential fallout from higher U.S. interest rates, Indonesian Finance Minister Chatib Basri said. Capital outflows are a threat facing emerging markets as the prospect of the Federal Reserve lifting rates lures funds, Basri said [..] In Indonesia, where the benchmark rate is already at its highest since 2009, policy makers may have to tighten further to preserve the nation’s relative appeal to investors, he said. “In the short term, some emerging markets may have to choose stabilization over growth,” Basri said. “You cannot promote economic growth when dealing with this issue. It will exacerbate the situation.”

The U.S. dollar has appreciated as the Fed edges closer to its first rate increase since 2006, while Indonesia’s rupiah has dropped for five straight weeks amid global funds pulling money from local stocks in anticipation of higher U.S. borrowing costs. As some of the world’s fastest-growing economies adapt to changing policy at the Fed, their contribution to global expansion might weaken, Basri said. [..] The prospect of higher rates in the U.S. is the single biggest challenge facing Indonesia’s new government, Basri said.

Basri has called for the incoming government to focus on narrowing the budget deficit, raising fuel prices and luring foreign investment. In Indonesia, where the key rate is at 7.5%, policy makers may have to hold firm to prevent funds from flowing out of the country, Basri said.

“Maybe the tightening cycle will continue, from both the fiscal and the monetary side,” he said. Such a step “is not really conducive to promoting economic growth,” he said. Indonesia also needs to diversify its base of investors, the finance minister said. Relying more on domestic bond buyers would help, he said. “If global liquidity becomes tighter because of this tightening policy at the Fed, it will be more difficult for a country like Indonesia to get foreign financing,” Basri said.

Not that all investors will leave. If only because the emerging market countries need to raise their base rates even higher.

A consensus is emerging among investors that some Asian markets can do well even with the prospect of higher U.S. interest rates on the horizon. Fund managers see stepped up corporate and economic overhauls by leadership in China and India this year, combined with relatively strong growth in Asian economies compared with the rest of the world, as reasons to be bullish. Investors choosing Asia have been rewarded in the past three months. The MSCI Asia ex-Japan index is up 2.4%, topping the 0.4% gain in emerging markets globally and comparable to the 2.6% increase in the S&P 500.

The Fed said Wednesday that it remains on track to end its bond-buying stimulus program in October. It is widely expected to raise interest rates next year. Higher interest rates in the U.S. can hurt Asian assets by drawing investment money into U.S. assets and away from Asia’s markets. Despite the concerns over U.S. interest rates, investors say they are selectively investing in Asian markets that they see as cheap and where economic fundamentals have improved or where they believe reforms are on the way. Investors continued putting money into Asian emerging markets last month, according to the latest data on money flows from the Institute of International Finance.

As the Federal Reserve debates the timing of a potential interest rate increase, some policymakers in the developing world aren’t taking any chances. Officials from Indonesia to Hungary say they’re trying to curb their reliance on foreign investors in case an eventual Fed rate increase sparks another broad retreat from emerging markets. “Everyone is getting prepared” for a U.S. rate increase, Mauricio Cardenas, Colombia’s finance minister, said in an interview on Tuesday.

Mr. Cardenas said his government has worked to shift its borrowing from foreign to domestic buyers, on the view that locals are less likely to sell en masse based on shifts in global monetary policy. “I don’t think it fully insulates us from an increase in interest rates in the U.S., but it certainly protects us,” Mr. Cardenas said.

Years of low rates and stimulus from the Fed, deployed in an effort to jumpstart growth in the U.S., had the side effect of sending investors piling into developing world assets. The rock-bottom interest rates available in the U.S. essentially made the higher returns promised by bonds and stocks in countries such as Brazil and Turkey more attractive.

But what happens when that flow reverses? Global markets got a taste last year during a so-called “taper tantrum,” as investors fled emerging markets in anticipation of a reduction in the Fed’s stimulus efforts.

One more then, because you enjoy it so much:

Fears of higher U.S. interest rates are prompting fund managers to cut back on investments in emerging markets. For now, investors still are moving into developing markets, though the pace has moderated. Emerging-market stocks and bonds received $9 billion from investors in August, compared with an average $38 billion a month between May and July, according to the latest data from the Institute of International Finance. But after months of heavy buying in such places as Brazil and India, lured by the prospect of higher returns than in the Western world, investors are taking a more cautious stance. Chief among these money managers’ concerns: that the recent rally in emerging-market stocks, bonds and currencies could be derailed as the U.S. Federal Reserve gets closer to raising interest rates.

It’s how the game is played. The weak must be sacrificed so the strong be stronger. It’s like a law of nature. From some point of view, at least. For me, it looks more like ‘we’ have found another way, and another victim, to keep ‘our’ game going a bit longer. There is no way this just happens, in some accidental kind of way. There is a reason the Fed raises both interest rates and the US dollar inside the same timeframe.

Short emerging markets. Play it well and their misery can make you a fortune. Isn’t that what life is all about?