When the OECD, World Bank, and the International Labor Organization agree on something, it’s a sign something serious is afoot. In this case, the three groups have issued a joint paper, G20 labour markets: outlook, key challenges and policy responses, which despite the anodyne title, gives a grim account of the prospects for workers in major economies.

The general outline of findings won’t come as much of a surprise to the cognoscenti. What is novel is having such authoritative bodies state in such an unvarnished manner how bad things are. For instance:

The stagnation in wages cannot be explained solely by weak economic growth. This trend also reflects a widening gap between growth in wages and labour productivity. In the advanced G20 economies, the gap began before the crisis and has not narrowed since, apart from a short reversal during the depth of the crisis in 2008. The gap has grown wider since 2010, as wages in many advanced economies continue to stagnate while productivity has recovered in the group as a whole.

Real wage gains have been tepid in advanced economies: 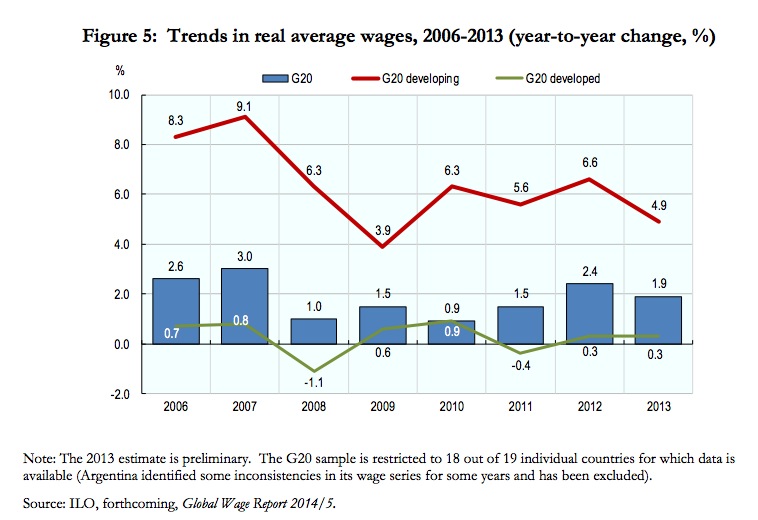 Workers not sharing in productivity gains has become normal: 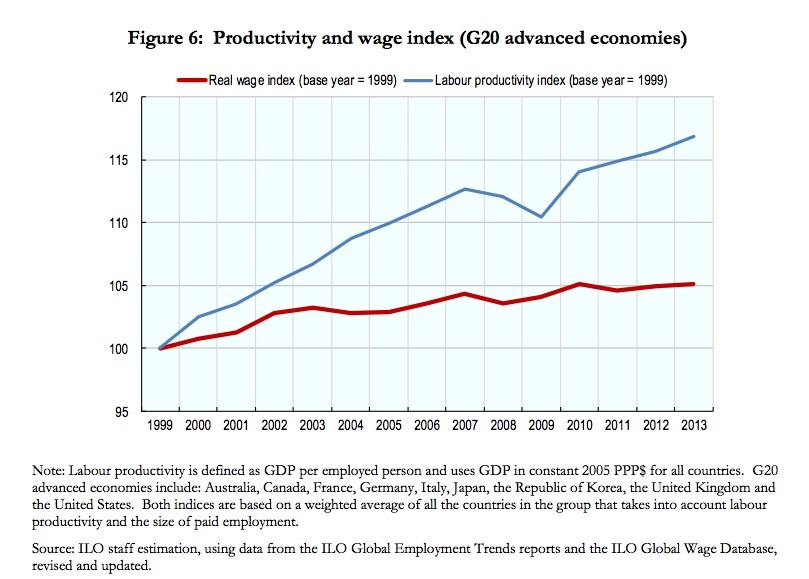 And that, which reflects reduced employee bargaining power, has resulted in a falling share of labor income relative to GDP: 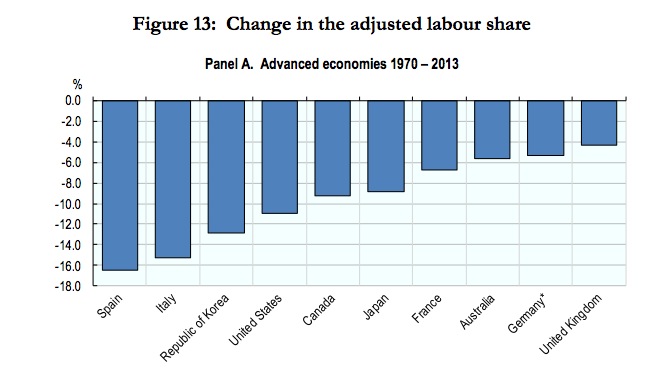 And one of the worst outcomes is the rise in long-term unemployment in many economies: 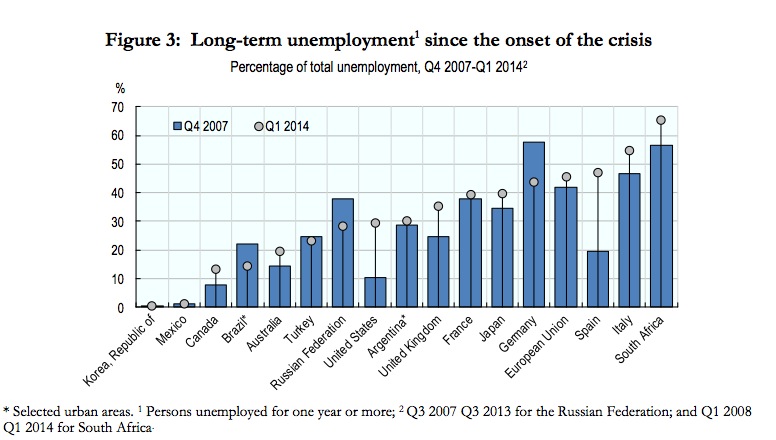 While the problem statement is compact and effective, the analysis and proposals are standard fare and thus well short of what is needed. The article focuses on superficial causes, like underinvestment, and skips over deeper ones, particularly, that the rules of the game have been successfully reengineered to favor corporations and investors over workers, and the results are no accident. Thus, for instance, the recommendations include the usual call for greater support for demand, as in more deficit spending, when the masters, um, business classes, have been firmly opposed. Similarly, the article discusses the danger of skill erosion and calls for more training. In fact, the evidence is overwhelming that employers don’t value formal (as in classroom based) training, particularly when provided in public programs). Bosses, whenever possible, hire the candidate who can “hit the ground running,” which means someone who has done precisely the same job for a similar employer. They can get away with shirking the formerly-required on-the-job training due to how slack the employment markets are. Thus it is quite likely that employers would be forced to revert to their former norms if unemployment were much lower than it is now.

Michal Kalecki’s 1943 Essay on Politics and Ideology gave a clear and cogent explanation of why the investing classes are opposed to full employment policies. In short form, it offends their ideology and undermines their social standing. This is an important section and I urge you to read it closelyIr i:

1. A solid majority of economists is now of the opinion that, even in a capitalist system, full employment may be secured by a government spending programme, provided there is in existence adequate plan to employ all existing labour power, and provided adequate supplies of necessary foreign raw-materials may be obtained in exchange for exports.

If the government undertakes public investment (e.g. builds schools, hospitals, and highways) or subsidizes mass consumption (by family allowances, reduction of indirect taxation, or subsidies to keep down the prices of necessities), and if, moreover, this expenditure is financed by borrowing and not by taxation (which could affect adversely private investment and consumption), the effective demand for goods and services may be increased up to a point where full employment is achieved. Such government expenditure increases employment, be it noted, not only directly but indirectly as well, since the higher incomes caused by it result in a secondary increase in demand for consumer and investment goods.

3. It may be objected that government expenditure financed by borrowing will cause inflation. To this it may be replied that the effective demand created by the government acts like any other increase in demand. If labour, plants, and foreign raw materials are in ample supply, the increase in demand is met by an increase in production. But if the point of full employment of resources is reached and effective demand continues to increase, prices will rise so as to equilibrate the demand for and the supply of goods and services. (In the state of over-employment of resources such as we witness at present in the war economy, an inflationary rise in prices has been avoided only to the extent to which effective demand for consumer goods has been curtailed by rationing and direct taxation.) It follows that if the government intervention aims at achieving full employment but stops short of increasing effective demand over the full employment mark, there is no need to be afraid of inflation.2

2. The above is a very crude and incomplete statement of the economic doctrine of full employment. But it is, I think, sufficient to acquaint the reader with the essence of the doctrine and so enable him to follow the subsequent discussion of the political problems involved in the achievement of full employment.

In should be first stated that, although most economists are now agreed that full employment may be achieved by government spending, this was by no means the case even in the recent past. Among the opposers of this doctrine there were (and still are) prominent so-called ‘economic experts’ closely connected with banking and industry. This suggests that there is a political background in the opposition to the full employment doctrine, even though the arguments advanced are economic. That is not to say that people who advance them do not believe in their economics, poor though this is. But obstinate ignorance is usually a manifestation of underlying political motives.

There are, however, even more direct indications that a first-class political issue is at stake here. In the great depression in the 1930s, big business consistently opposed experiments for increasing employment by government spending in all countries, except Nazi Germany. This was to be clearly seen in the USA (opposition to the New Deal), in France (the Blum experiment), and in Germany before Hitler. The attitude is not easy to explain. Clearly, higher output and employment benefit not only workers but entrepreneurs as well, because the latter’s profits rise. And the policy of full employment outlined above does not encroach upon profits because it does not involve any additional taxation. The entrepreneurs in the slump are longing for a boom; why do they not gladly accept the synthetic boom which the government is able to offer them? It is this difficult and fascinating question with which we intend to deal in this article.

2. We shall deal first with the reluctance of the ‘captains of industry’ to accept government intervention in the matter of employment. Every widening of state activity is looked upon by business with suspicion, but the creation of employment by government spending has a special aspect which makes the opposition particularly intense. Under a laissez-faire system the level of employment depends to a great extent on the so-called state of confidence. If this deteriorates, private investment declines, which results in a fall of output and employment (both directly and through the secondary effect of the fall in incomes upon consumption and investment). This gives the capitalists a powerful indirect control over government policy: everything which may shake the state of confidence must be carefully avoided because it would cause an economic crisis. But once the government learns the trick of increasing employment by its own purchases, this powerful controlling device loses its effectiveness. Hence budget deficits necessary to carry out government intervention must be regarded as perilous. The social function of the doctrine of ‘sound finance’ is to make the level of employment dependent on the state of confidence.

3. The dislike of business leaders for a government spending policy grows even more acute when they come to consider the objects on which the money would be spent: public investment and subsidizing mass consumption.

The economic principles of government intervention require that public investment should be confined to objects which do not compete with the equipment of private business (e.g. hospitals, schools, highways). Otherwise the profitability of private investment might be impaired, and the positive effect of public investment upon employment offset, by the negative effect of the decline in private investment. This conception suits the businessmen very well. But the scope for public investment of this type is rather narrow, and there is a danger that the government, in pursuing this policy, may eventually be tempted to nationalize transport or public utilities so as to gain a new sphere for investment.3

One might therefore expect business leaders and their experts to be more in favour of subsidising mass consumption (by means of family allowances, subsidies to keep down the prices of necessities, etc.) than of public investment; for by subsidizing consumption the government would not be embarking on any sort of enterprise. In practice, however, this is not the case. Indeed, subsidizing mass consumption is much more violently opposed by these experts than public investment. For here a moral principle of the highest importance is at stake. The fundamentals of capitalist ethics require that ‘you shall earn your bread in sweat’ — unless you happen to have private means.

4. We have considered the political reasons for the opposition to the policy of creating employment by government spending. But even if this opposition were overcome — as it may well be under the pressure of the masses — the maintenance of full employment would cause social and political changes which would give a new impetus to the opposition of the business leaders. Indeed, under a regime of permanent full employment, the ‘sack’ would cease to play its role as a ‘disciplinary measure. The social position of the boss would be undermined, and the self-assurance and class-consciousness of the working class would grow. Strikes for wage increases and improvements in conditions of work would create political tension. It is true that profits would be higher under a regime of full employment than they are on the average under laissez-faire, and even the rise in wage rates resulting from the stronger bargaining power of the workers is less likely to reduce profits than to increase prices, and thus adversely affects only the rentier interests. But ‘discipline in the factories’ and ‘political stability’ are more appreciated than profits by business leaders. Their class instinct tells them that lasting full employment is unsound from their point of view, and that unemployment is an integral part of the ‘normal’ capitalist system.

It is vital to understand that high unemployment and low wage growth are solvable problems. But powerful and well placed people believe it is in their interest to keep them unsolved. It will take considerable pressure to change their minds.