Yves here. One of the new forms of political handicapping is forecasting which policies newly-ascendant Republicans will put in the forefront and how likely they are to make meaningful progress with them. Corporate taxes are clearly high on their wish list, and one where corporate Democrats will be keen to pretend to be forced to capitulate go along. Another is their energy agenda, which is basically, “let no environmental protection stand in the way of more extraction.”

Now having said that, the Obama position really wasn’t as different as Democratic party loyalists would have you believe. Obama was clearly all in for fracking, and as Gaius Publius set forth in a series of posts, clearly cooked the greenhouse gas emission figures by excluding methane, the most potent greenhouse gas. But even the awfully energy friendly Administration wasn’t as aggressive as the Republicans will prove to be.

By Colin Chilcoat, a writer for Oilprice.com. Originally published at OilPrice

In a clear understatement, particularly with regard to the direction of energy policy, President Obama remarked: “Obviously, Republicans had a good night.” The GOP reclaimed control of the Senate and pushed their House majority to its largest margin since 1930 following Tuesday’s Midterm elections. A more unified Capitol Hill is now poised to address its long-suppressed energy agenda. Although touted as having long-term positive impact in the areas of energy independence and national economy among others, the GOP’s agenda falls short on its claims.

It’s no secret that Republicans will look to strike quickly on the Keystone XL Pipeline Project. Phases one through three are complete and the pipeline already stretches from Hardisty, Alberta to Port Arthur, Texas. The controversial fourth and final phase will nearly double the initial capacity and will connect the oil sands in Alberta with North Dakota’s own rich reserves en route to Steele City, Nebraska. Political will has largely misshapen the debate, however. Producers have long given up waiting and oil is finding its – more carbon intensive – way to American refiners via barge and train. Oil sands production in Canada appears ready to grow with or without President Obama’s approval, but simple math debunks claims that the pipeline is the path toward North American energy independence. Current combined oil production in Canada and the United States is 15.6 million barrels per day (mmbpd). Combined consumption is 20.8 mmbpd, leaving a deficit of roughly 5 mmbpd that must be sourced externally.

Despite its prominence on the Republican agenda, the Keystone XL is little more than a stepping-stone to larger issues for the newly empowered GOP. Energy exports, coal, and EPA regulations will highlight the docket.

The case for energy exports will gain momentum as Alaskan Senator Lisa Murkowski assumes leadership of the Senate Energy and Natural Resources Committee. Murkowski brings to her new role vocal support for oil and gas exports in addition to onshore and offshore drilling in Alaska. Murkowski and the GOP argue that lifting the ban on oil exports will contribute to an increase in oil production, economic growth, and lower gasoline prices. Similar arguments are made for liquefied natural gas exports (LNG), which provide the added geopolitical bonus of easing European dependence on Russian piped gas. The net numbers do not change however, and our production to consumption deficit ensures that any exports must be compensated by corresponding imports. Regarding LNG, the math again doesn’t add up.

– Natural gas futures prices for the end of the year currently sit at $4.43 per 1,000 cubic feet. Liquefaction, regasification, and transportation (to Asia) bump the cost to ~$13.00 per 1,000 cubic feet. Last week, Asian spot LNG prices dropped to $13, down from $15 in late September. Moreover, looming market oversaturation won’t improve the razor thin margins.

Natural gas exports make sense if the endgame is not the Asian market, but instead resuscitating an increasingly marginalized coal industry. Kentucky Senator – and soon to be Senate Majority leader – Mitch McConnell is fighting for just that. Coal has recently taken a back door to more competitive natural gas and renewables. Sustained low natural gas prices, an influx of gas-fired power plants, and a global coal supply glut threaten coal’s bottom line for the foreseeable future. 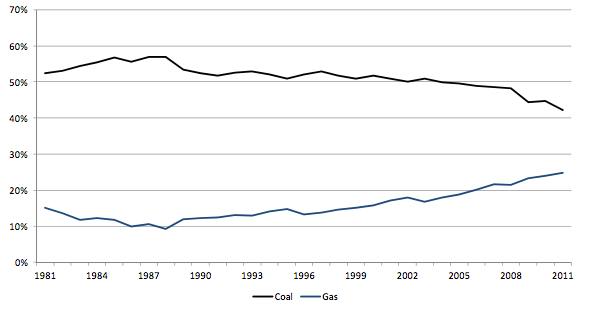 Finding the right balance in gas to coal competition is only half the battle and the GOP also has its sights set on the Environmental Protection Agency (EPA). In June, Obama and the EPA proposed a strict Clean Power Plan. The plan intends to cut carbon pollution from power plants by 30 percent from 2005 levels by 2030 – coal-fired power plants are the largest source of greenhouse gas emissions. Republican Representatives and Senators have been quick to mobilize and put forward their own legislation aimed at complicating the EPA’s regulatory regime. What’s more, adamant climate change denier Oklahoma Senator James Inhofe is set to become chair of the Environment and Public Works Committee. Inhofe and the GOP Senate will likely double up on their efforts to slash funding for the EPA and United Nations climate programs.